Project Calliope
In the midst of ordering PCB boards for my satellite, I read about a neat UK "CubeSail" satellite.  It's a sweeper for space, to clear out all the space junk that we're cluttering low earth orbit with.  It's basically a solar sail in reverse-- instead of propulsion, you use it to capture junk. 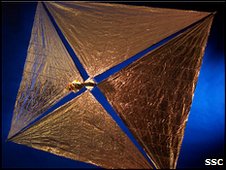 Now, this isn't needed for Project Calliope.  We will responsibly biodegrade in the most natural way possible-- flaming burn-up as our orbit decays into the atmosphere.  So we're tidy (and firey!)

The project lead, Dr. Lappas, hopes their orbit-sweeping sails will become "a standard, essential bolt-on item for a spacecraft".  So they're keeping the weight down.  Their test mission is basically a Triple CubeSat-class nanosatellite: 3kg, 10x10x30cm.  For those keeping track, a Calliope-class satellite is 3/4 CubeSat volume&weight. So we're not going to be able to stick a sail on Calliope this time around.

What pushes CubeSail into the uber-cool realm is, besides sweeping, they're also going to use it as a solar sail to steer their satellite.  No thrusters at all.

"We have developed a tilting mechanism that uses very tiny motors. It's able to move in two directions. This enables you to change the centre of mass of the sail. We're also going to be using small magnets to control the sail because they will interact with the Earth's magnetic field."

Fun!  Their project costs less than $1.5 million or, err, only 125 times "Project Calliope".  Of course, as I noted in last week's Labor Pains, ones costs go up drastically when you're actually paying people.

But just to toss this out... if anyone wants to launch a prototype solar sail for under $100K on a TubeSat, look me up.  That could be a fun plan for 2012, or at least kill time until we get a Quark-level orbital sweeper going.


Track The Satellite Diaries via RSS feed and Twitter @skyday  (or go slumming in my main column, the Daytime Astronomer)