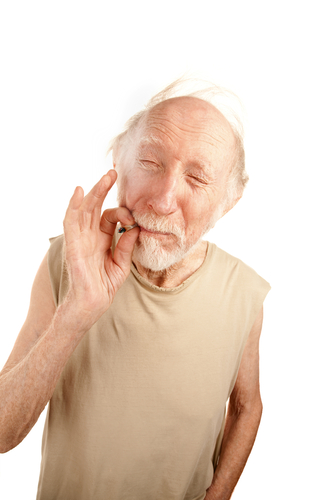 When the oddly-named Baby Boom generation (the "boom" happened in 1946, after soldiers returned from World War II, it wasn't an entire generation) were young, it was the age of "Reefer Madness", with kids involved in manslaughter, suicide, and a whole bunch else thanks to marijuana.

Now the tables have turned. Instead of being a gateway drug to attempted rape and heroin addiction, marijuana has been given a health halo with just as little evidence. But while the former may not have stopped Baby Boomers from inhaling some smoke, the latter has certainly encouraged it, according to the responses of 47,140 adults aged 50 and older in the National Survey on Drug Use and Health (NSDUH) from 2006 to 2013, which has led to a paper in Addiction.

The authors found a 71% increase in marijuana use among adults aged 50 and older between 2006 and 2013. But those immediately the Baby Boom, adults ages 65 and older, had much lower prevalence of marijuana use compared to ages 50-64. The age disparities in use make some sense. Those born after World War II enjoyed a significantly better life than those born before, and had the luxury of a cultural revolution, which included rebelling in ways like using marijuana and thinking Andy Warhol was an actual artist.

Prevalence was higher among men than women through all years, which has matched medical marijuana claims, where men account for nearly all pain applications while women report over 50 percent of the actual pain to doctors.

Is this really a surprise? Only to young people in media, who tend to think of older generations as more conservative - seriously, I once read a young journalist talk about the more conservative culture of the 1970s, apparently without realizing that being bisexual was a thing then, and "All In The Family" could never get on network television today. Teenagers in the 1960s were hardly more conservative, even if most of them had short hair and never skipped classes to stage a protest.

They likely didn't smoke less, they just admitted it less. The first "Baby Boomer" President, Bill Clinton, was forced to admit he smoked it but said he didn't "inhale" showing that people of that age were more worried about what their kids would think than being honest and they simply lied on surveys a lot more than they do now.

It also reaffirms what we have learned about vaccines and politics; surveys do not match behavior. On surveys, few claim to be anti-vaccine but I can draw a circle on a political map and show you who will behave in anti-vaccine ways - they have the money for medical visits and simply refuse to get vaccines for their children. The recent Presidential election of Donald Trump also affirms that when it comes to something people don't want to be scolded about, like marijuana or voting, the public will lie on surveys too.

And with age, you tend to stop giving a crap what other people think.