Hank Campbell
In a few short hours, the World Series will begin between the Texas Rangers and the St. Louis Cardinals.  In the midst of all the talk of how offense is winning games this year (team Earned Run Average by starters in the post-season is over 5) and the strategic match-ups, there will be little attention paid to the belief engines in the skulls of individual players; their brains.

Texas Rangers game 1 starter C.J. Wilson has a set of performance-enhancing rituals that go way beyond never cleaning his batting helmet.  He doesn't like to take any sort of drug, or alcohol, for example, but he isn't a right-wing, religious fundamentalist, he is the other kind; a belief that everything is science if someone tells him it is.   He is so pro-science he may be anti-science. 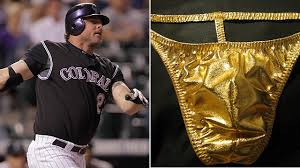 Jason Giambi wore a gold thong for luck - at least once, anyway. That's how lore evolves.

But he may not be wrong if he gets into -300 degree water or a hyperbaric chamber. If his pattern-finding brain believes that gives him a 1% advantage, it may actually give him an advantage.

Our brains are 'belief engines', as Science 2.0 fave (and guest columnist here) Michael Shermer used the term in his book "The Believing Brain" earlier this year.  Shermer is the kind of skeptic everyone can enjoy because he isn't just on a bender about religion or Republicans (he is, like a certain Science 2.0 author, more of a socially libertarian fiscal conservative and thus, no party will accept him), he also tackles popular evolutionary psychology woo like that conservative beliefs result from psychopathologies and plainly scoffs at such pseudoscience and the confirmation bias that allows science writers, bloggers and even some scientists to accept it because it matches their political world view.

But it's belief engine relevance to the world of baseball that matters today.  Generally, if C.J. Wilson, a rich guy, wants to dunk himself in overpriced cold water, I am all for it.   But if some homeopathy crank is exploiting poor people or scared parents of sick children who think it offers them an alternative cure, I blast them.  Even that is just my belief engine at work.  Why do I care less about rich people, except I just do?

The brain is a funny beast.  Neuroimaging shows the brain responds the same when a religious person talks about belief in a virgin birth as it does when a biologist talks about evolution; we can use quaint terms like 'acceptance' of science but it's all belief to the brain. Why is one anti-science to parts of the science community while one is accepted by 90% of the world? Our brains evolved as the world did and our brains had to find ways to understand what was happening around us, the natural laws.  As we began to understand the world according to natural laws, our 'patternicity' and 'agenticity' required less belief in the supernatural.  No more gods throwing thunderbolts, we know how clouds work.  Yet understanding the brain itself, and its deep workings, is still in the science dark ages.  We literally look at pictures and try to make correlations.

In the case of confirmation bias, though, we also get a pleasant dopamine jolt, so our brains are still wired to match data to our topology.  Understanding the brain as a belief engine, it makes sense that science bloggers will believe hESC research objections are anti-science while objections to animal research are simply moral and not anti-science - it makes them feel so good it overrides their rationalism.

We can't undo millions of years of brain evolution, our ancient brain is forced to live in a modern world, and we will continue to find patterns to make the world less crazy - but science can at least correct that.  Well, maybe.  If you read Brainpunk - "Brain Games" Messes With Your Mind, Apollo Robbins will tell you exactly what he is going to do and you will fall for it anyway, no matter how scientific you are.

We're mostly rational, at least on issues where we want to be correct; a believing brain just prefers to believe different things than other people.  In the first half of the baseball season, when it looked like the Pirates might not continue their streak as the worst major league team in the history of sports, I could wear my Pirates jerseys out of pride rather than defiance and so I did - and they won.  So every day I wore a Pirates jersey.

"You realize you are not actually playing the game for them, right?" my wife asked. Of course I realize that.  Or, as comedienne Whitney Cummings said, "That's like me watching CSI dressed as a dead hooker."

Well, my wife believes if people are nicer to chickens the eggs they produce are nutritionally superior, and that if she hides my bills I will stop leaving them on the kitchen counter.  That's her belief engine at work.

So if C.J. Wilson goes into a hyperbaric chamber and pitches well on three days rest, does it really work or not?  There are two answers to that and which one you prefer comes down to how you well you suppress your brain's instinct to believe that all patterns are real.