Hank Campbell
Almost 2 million Americans have an advanced form of age-related macular degeneration (AMD) and about 100,000 are blind from the disease. In AMD, cells in the retina, that layer of tissue in the back of the eye, begin to break down. What was once sharp central vision becomes blurry.

Why do some people get it and others don't? Family history is a factor but we are all taking a gamble as we age. Studies have shown that if you don't have signs by age 60, you are unlikely to get it. Why are some older people in a (pardon the pun) gray area, with no genetic history yet still likely to get it? Does that mean it's preventable? Scientists and doctors have long searched for clues to help solve that mystery but now it's a growing concern because Baby Boomers are retiring, and that means we could be facing an epidemic.

An image with normal vision and with age-related macular degeneration. Credit: NIH

There are some treatments, and also some correlations. The presence of drusen under the retina have been correlated to AMD, for example. Drusen are tiny yellow fat deposits - lipids - and fat is essential to health but with age drusen sometimes build up. There has been no causation between drusen and AMD but having 'soft' drusen, which are larger, is more often linked to people who also get AMD and so doctors watch for that. Also under scrutiny is abnormal blood vessel growth - angiogenesis - where leaked serum and blood damages the macula and causes central vision loss. NIH studies have implicated the protein known as vascular endothelial growth factor (VEGF) in angiogenesis.

And then there is diet. Your mother was not wrong for telling you to eat carrots for lots of reasons but there needs to be more than that - "I ate carrots and did not get macular degeneration" doesn't make for a controlled science study but it is at least a clue, so science often looks for common denominators in people who don't get a condition. And there is a kernel of truth in diet being a factor, as the National Institutes of Health showed. Carrots have antioxidants and they have long been correlated to healthy eyes.

The AREDS study had 3,640 people between the ages of 55 and 80 who had at least early stages of AMD. About 90 percent of participants finished the trial (some died, a few were lost to follow-up) and the NIH researchers found that high-risk groups had a 25 percent less chance of getting advanced AMD if they received high-doses of vitamin C, vitamin E, beta-carotene (a precursor to vitamin A) and zinc.

That has always been the promise of antioxidants - they are part of our body's natural system - and everyone wants something that can be fixed for the cost of food. To have better eyes, why not just get more antioxidants in leafy greens? It's a nice idea but to gain the benefit, the participants in the AREDS study had to consume 500 milligrams of vitamin C, 400 of vitamin E, 15 of beta-carotene and 80 of zinc oxide.

People are not realistically going to wolf down 70 bags of spinach every day to get that kind of vitamin E. That is the pitfall related to the bioavailability of antioxidants from food.

But since the AREDS study, that problem has been solved.

Antioxidants have to work because otherwise, nothing in cellular energy makes sense

Sometimes science uses inference. Sherlock Holmes said he used deduction and he did, in a way - by eliminating the impossible. But he only knew what was possible by inference. There are many famous cases of inference in science. Evolution of humans cannot possibly be replicated in the lab, for example, but without evolution very little in biology makes any sense. In physics, dark matter must exist because without it, cosmological gravity makes no sense.

In mitochondria, antioxidants have to work or cellular energy makes no sense - we know our body oxidizes food just as sure as we know the we orbit the sun. Antioxidants were shown to work in the AREDS study, but only using vitamin supplements at high levels.

Trying to take vitamins to get antioxidants is sort of missing the point of what mitochondria really need to do - maintain energy metabolism. Our bodes don't need the middleman for that, we produce antioxidants - just not everyone can do it well, especially as we age. We all agree if it's possible to eliminate the middleman, we should do it. Vitamin supplements are often the middleman between mitochondria and antioxidants because it's an easy sale and no one has to get approval to sell vitamin A.

And there is no evidence vitamins really work. Vitamin A deficiency is incredibly rare in Caucasian people in developed nations, yet that is the demographic most likely to get AMD. Worse, beta carotene, used in the AREDS study, has been correlated to a higher risk of lung cancer in smokers - which is a lot of older people - and actually blocks vitamin A when taken in excess, while zinc supplements mean taking copper supplements and increasing the risk of possible urinary tract problems - a spiral of side effects is exactly what older people concerned about health want to avoid. 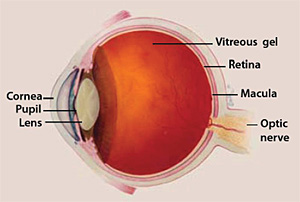 I have written about bioavailability of antioxidants a few times (The Most Promising Antioxidant You Never Heard Of and Mitochondria And Antioxidants: A Tale Of Two Scientists) and it has been a hot topic since Dr. Peter Mitchell discovered what would eventually get a Nobel Prize for chemistry in 1978: how adenosine triphosphate (ATP) - our energy currency - gets made. Yet from the 1960s through the 1990s antioxidants remained something that just held a lot of promise - they have to work or cellular energy makes no sense - but didn't provide much in the way of real results. That was because of bioavailability. The antioxidants were not getting to where they needed in meaningful quantities.

It wasn't until after the AREDS study that Professor Rob Smith and Dr. Michael Murphy, working at the University of Otago in New Zealand, solved the problem by creating a molecule they named MitoQ, that could actually slip through the dense inner wall of mitochondria and make an antioxidant truly bioavailable.

Would the results have been different if more antioxidants has been bioavailable to the participants in the AREDS study? The results from the NIH seem to say so. Their data find that 8 million American Baby Boomers are at risk of AMD and that 1.3 million could get it within 5 years. Even without a targeted antioxidant, that means 300,000 people could avoid severe vision loss using their formulation. With a targeted antioxidant that would have to go higher.

For AREDS 2, which began in 2006, they used Omega-3 fatty acids and the antioxidants lutein and zeaxanthin. They wanted to see if they could get the same results as the AREDS study without the beta-carotene. Like beta-carotene, lutein is a naturally-occurring carotenoid created by plants, which, indirectly or directly, is how we get it. The yellow color of chicken skin and egg yolks is due to lutein and because it accumulates in the retina, it has been called the 'eye vitamin'.

Like lutein, zeaxanthin is one of hundreds of known naturally occurring carotenoids. It even gets its name from Zea mays, the common corn that gets its color from zeaxanthin. Lutein and zeaxanthin have the same chemical formulas and are isomers, but they don't have the medical implications of beta-carotene.

Omega-3 fatty acids made no difference and the substitution of the two other carotenoids for beta-carotene actually did have a slight benefit to AMD, along with a slightly lower incidence of lung cancer.

Why not use a better targeted antioxidant instead of just swapping out beta-carotene? Science is often about patiently checking off the boxes and proceeding in linear fashion. It is a movie trope that some incredible breakthrough happens and the world changes immediately, but it took 15 years before Einstein's Theory of Relativity was generally accepted and that was without the extra layer of the U.S. federal government being involved.

Paraphrasing Samuel Broder, former Director of the National Cancer Institute, if it had been up to the NIH to create a centralized program to cure polio, we'd have the best iron lungs in the world but we still wouldn't have the vaccine that eradicated polio. Discovering if a targeted approach would be better may not happen if we wait for government committees to work on it.

If there is an AREDS 3 study, maybe they will go straight to a modern antioxidant, but if I had a history of AMD, I'd certainly be taking one without waiting for them.

It's either that or eat 70 bags of spinach a day.