It's Halloween and I am in New York and I wanted to do something local. But since Sleepy Hollow does not have a way to get there by subway (I don't even know where I would rent a car in Manhattan, I suppose I could get there by bus, but even using a subway is a populist stretch for me) I instead decided to get up and create a Ghostbusters tour.  Why? Because even though only three actual weeks of filming took place here, it is strongly associated with the city.

Fortunately I am just a few blocks from Spook Central where all of the real action takes place, and almost all of it was on a subway line, minus some technology hiccups.(1)

Some events in the movie won't be on my tour because they didn't happen in New York. The Sedgwick Hotel where they meet Slimer, for example, is the Millennium Biltmore in Los Angeles. And I didn't go to the Manhattan City Bank across the street from the New York Library, because even though they put the Ghostbusters in business by giving Ray a third mortgage at 18 percent interest, the library may have been the first event in the movie, but it was last on my tour and  as you can see by the map and legend, I had gone a long way, about five hours of combined walking and subway rides - and there are two banks on every block, someone would have given him the money then.

Green is where I walked, blue is when I took the subway and the numbers are the events as they happened in the movie. 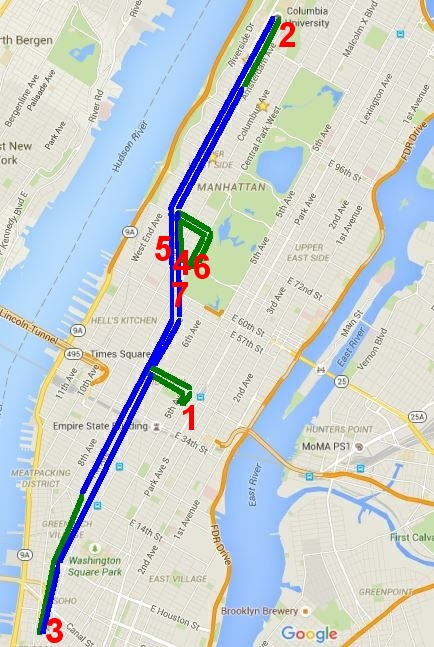 Since my place is on 72nd street the order I visited was 4,6,7,5 - I walked to Central Park West to Spook Central, then into the park to Tavern on the Green, then to Columbus Circle where I got a coffee, up to Lincoln Center, then back to 72nd street to the subway.  I got off the subway at 96th because the express does not go to Columbia, so I walked up Broadway to Columbia at 116th (event location 2 in the movie) then I took the subway from there to location 3, but the subway was under construction at 14th street and I needed to have gotten off a few exits before to take an alternate subway, so I walked another mile to location 3. Then I took the subway back to Times Square (which is in the movie but unrecognizable then and now) and walked to the library, then walked back to Times Square and took an express subway to 72nd.

But to mirror the movie, here are their versions (L) and mine (R), in the order they happened in the movie.

The New York Public Library, before the title sequence.


Columbia University. The place where I am standing when I took my picture can be seen over Venkman's left shoulder, the steps of the library.

Hook and Ladder 8, which has been around forever. It may have been "like a demilitarized zone" then under any number of successive Democrats but after back-to-back Republicans it's a nice area now.


I can make a "still under repair" joke because the top is actually under repair. The building is 55 Central Park West, but they just call it Spook Central. I don't know what cellists at Lincoln Center got paid then but I am betting they can't afford that place now.


No one was around that early in the morning, other than people cleaning, so I couldn't get someone to take a picture of me spinning like Venkman does at the end of this scene.


Tavern On The Green was open then, and it is open again now, but for five years it was closed. However, this early in the morning, and with the New York City Marathon happening tomorrow and about 50 feet away, this is the best shot I could get.


In Columbus Circle, Tully tries to talk to a horse in a horse-drawn carriage. This week, protesters outside the Mayor's office chanted "F--- the Mayor!" because he did not get rid of those horse drawn carriages and replace them with electric cars. Democrats were happy to be back in power, now they hate the guy because he doesn't ban horses. It may be 1984 in NYC again soon enough.


After that it was back to Spook Central in the movie. There are other locations, but just generic streets and a bridge, hard to recognize for any but the die-hard locals, so I left those out.

(1) And an interlude. Since I walked from 96th to 116th where Columbia is (no express goes there and the local subway was something like 8 minutes of waiting) I stopped at this restaurant and had breakfast. It was made famous as the exterior of the coffee shop the group always hangs out at in "Seinfeld." 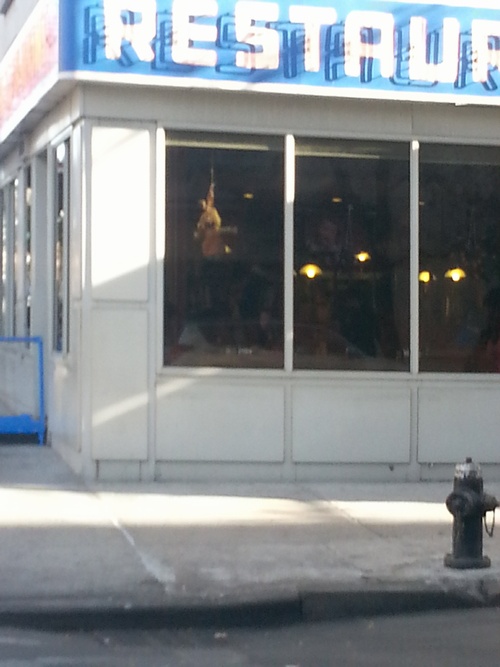