The Sacred Animal Necropolis, as it was called after being discovered by archaeologists last century, was dedicated to Anubis - that is the one with the head of a dog/jackal - and is believed to contain up to 8 million animals, most of them small dogs. It's hard to be sure because the animals were not mummified the way royal members were so they have just basically decomposed into heaps of DNA. Most were placed there in the Late Dynastic (747-332 B.C.) and Ptolemaic (332-30 B.C.) Periods. 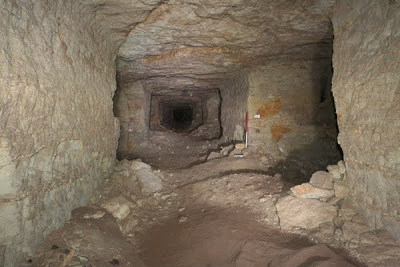 Why were they put there? Ancient Egyptians sent prayers with their dogs to the gods - the spirit of the animal took the prayers to heaven. So in a lot of cases they killed the pets to hurry the message along.  The Dog Catacombs, located to the north-east of the Step Pyramid, have the most but other catacombs have bulls, cows, just about anything they had that died. Ironically, the burial site dedicated to Anubis was to protect the carcasses from...dogs and jackals.

There are even a few cats but the researchers say those might have been fakes - they could have run out of dogs so they stuck in a cat as a replacement.

Bastet was probably not amused.
Science 2.0
More Articles All Articles
About