Hank Campbell
It's no surprise that the authors of a study, whose work is spun by people selling diet fads into being conclusive proof that a diet fad is science, disagree with what some media outlets are doing with their work - and that their disagreement gets far less attention than the reports being used to claim Miracle Science.

Non-celiac gluten sensitivity is being heavily promoted by people selling new diet lifestyles and food marketing groups are happy to chime in - the same way you can buy non-GMO rock salt that is certified by the Non-GMO Project, you can have labels proclaiming that something is gluten-free, because it had no gluten in the first place.

And then there are the substitutes, with all of that extra sugar, extra fat, hydroxypropyl methyl cellulose and xanthan gum that are not exactly doing the public any health favors.

Celiac sufferers knew that all along, of course. They do not see see alternatives as a diet fad, it saves them from being poisoned, and they are happy about all of the new food choices, but less happy that a bunch of rich, white women are claiming they have their disease and making it look like a gimmick. The perception that something is a fad puts celiacs at risk. And those Wheat Belly arguments are based on shaky ground, a kernel of science extrapolated out to be advocacy. 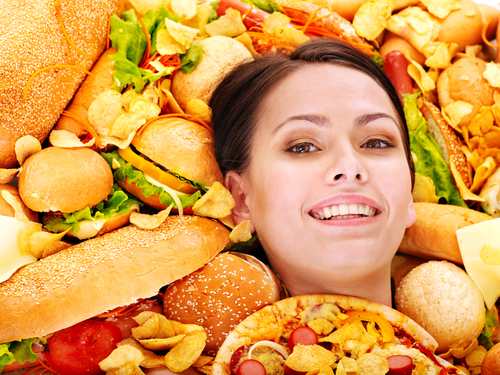 No rash, so she must not watch The Dr. Oz Show. Credit: Shutterstock

Previous studies have shown that 75 percent of people claiming to be sensitive to gluten show no reactions and a new paper discussed by Dr. Ross Pomeroy at Real Clear Science finds something even odder - of people claiming non-celiac gluten sensitivity (NCGS) and who reported effects from a gluten pill, 50 of the 59 subjects had an "equally negative response to the placebo (likely due to the nocebo effect), showed no statistically significant differences, or experienced a worse response to the rice starch pill! In other words, the researchers identified only nine subjects who they suspected might actually be sensitive to gluten."

Why odd? Because despite the authors clearly stating "our study does not provide any progress in identifying possible biomarkers of NCGS", advocacy sites, bolstered by one science-y sounding article, are insisting gluten sensitivity is settled and there is a "physical explanation" for NCGS.

Obviously it could be real - 15 percent of the people claiming to be sensitive to gluten were, and that is in line with medical estimates that a gluten issue affects 1-2 percent of the population, but almost 20 percent of Americans claim to be worried about gluten, thanks to corporate media and its Scare Journalism techniques, and that is just bogus exploitation.

Science remains a field where you have to prove it is so, not fall back on 'you can't prove this isn't happening'.  Diet book authors and the websites promoting them should remember that before they invoke science, or the scientists they invoke will turn on them.
Science 2.0
More Articles All Articles
About