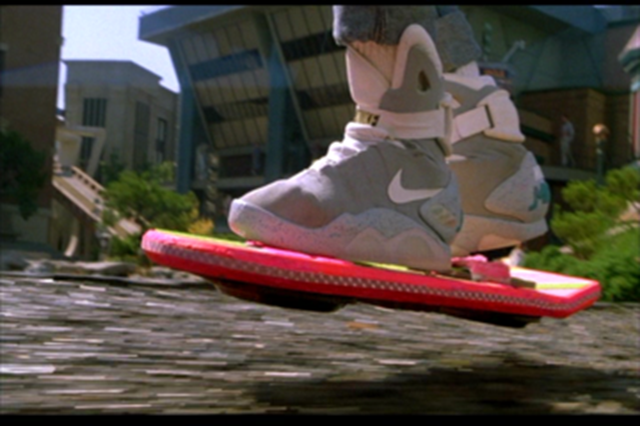 As most culturally astute people of a certain age know, 2015 is "The Future" of "Back To The Future II." "Back To The Future" was, of course, a seminal comedy in 1985 - a time when terrorists were from the Mid-East and you could do a time-travel experiment on your dog without getting protests outside the theater.

The sequel had funny bits, though nothing could top the original. Yet we aren't going back to 1955 so the future is what we have to look forward to, and in "Back To The Future II" Marty's eponymous skateboard, which he created in 1955 (along with rock music and, errr, himself) has become a hoverboard 30 years later in 2015. And we get retractable clothing. And my local Mel's Diner is not decorated like the 1950s and early '60s, it should have Max Headroom and Ronald Reagan.

Well, we're a year away from Marty's entry date in the film, though 2015 is just 107 days out and this technological miracle should at least be in production by early 2015 if an average kid has it by next autumn. So where is my hoverboard? The folks at Dweebcast wanted to know also, so as part of our ongoing "Science of Sci-Fi" collaboration, we put them in touch with Hugo- and Nebula-Award winning author, astrophysicist and Science 2.0 featured writer Dr. David Brin. Yes, Andy calls him "Doc", which is also fun.

Brin explains that the hoverboard issue can be solved - and it might lead to a breakthrough in fusion also.  But there is also a good reason the wheel is not out of things just yet. Take a look: