Hank Campbell
In an article I did for USA Today's Friday/weekend edition, I noted the recurring meme that American education is 'abysmal.'

It used to be that the criticism of education was primarily coming from the educational lobby, and it was something they said they could solve with money. When I was in middle school, the US Department of Education was created and since it has no role other than collecting money and redistributing it to states, it quickly became overrun by lobbyists. Education unions quickly controlled education funding because they controlled the Education Department, even though the Education Department has no role in actual education. It was a weird culture to have lobbyists representing teachers and their unions saying education was bad but that education could fix it.

The public relations campaign worked, though not the way they wanted. By the late 1990s the system was considered so hopelessly broken that both political parties - including the Democrats that get 90% of the campaign funding from education unions - agreed things had to change; there had to be some accountability. In 2002, Democrats their donors and No Child Left Behind passed 91-8 in the Senate and 384-41 in the House. And it brought standards. But the attacks began immediately - we should not be teaching to the test, the complaints ran, and we were telling teachers how to teach.

No Child Left Behind was gutted by the Obama administration and what are the criticisms we see of students now that we no don't teach to the test like we supposedly did for 6 years? That they don't do well on international tests.

Education is complicated and it took up a whole chapter in Science Left Behind but the reason I wrote the piece in USA Today is because recent surveys show that people now believe American children are the worst in the world. 72% of the public also want to fire poorly performing teachers and 93% want to use standardized tests to know where kids are falling short - the only difference from the 1990s is that back then no one thought American students were stupider than everyone in the world. Even scientists, who are more evidence-based in their fields, give in to hyperbole about education.

What is left out of the recurring criticisms of education, even among scientists who aren't in education but should know how good education remains, is that America has led and continues to lead the world in research.  This graphic by Jon Bruner in Forbes is not in my article but take a look at this chart of Nobel prizes. By 1990, when American students took the very first international test, were at the age where their research started to get Nobel Prizes, you can see America became truly dominant. 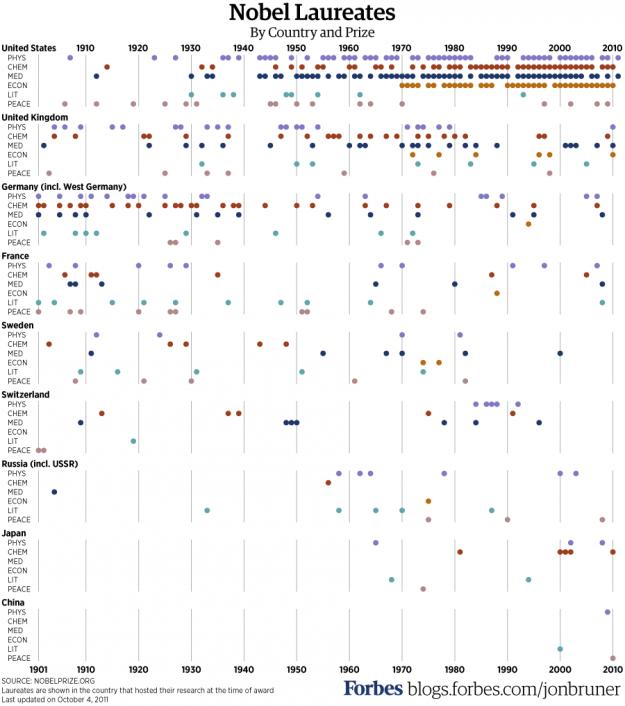 What kind of scores did the Americans who now clobber the world in Nobel prizes get on their international standardized tests? They were 11th - out of only 12 countries. That would have led to real hand-wringing if the Internet had existed then, but that poorly performing generation built the Internet you're reading this article on.

We don't want to be a nation where only a few elites are well-educated but that isn't happening either - as I note in the article, one of the statistics lamented is 'adult science literacy' and the percentage of Americans who understand science is a listed as a worry ... but critics leave out that adult science literacy is triple what it was a generation ago.

The science of good news by Hank Campbell, USA Today
Science 2.0
More Articles All Articles
About