Hank Campbell
The 21st century promises to bring a kind of science warfare only dreamed about in science fiction. Already it's become clear that it is possible to paralyze a large chunk of America and get policymakers in perpetual crisis mode, even with something as well-known as ebola.(1)

That kind of threat is getting mainstream attention now, but it has long been researched by government agencies that are in the business of predicting threats. And scientists working for them have recently created a hybrid bacteria - a cyborg mix of computer chip and genetically modified organism - that can not only detect infectious diseases but automatically mobilize to defeat them. This ain't your daddy's Deathlok.(2)

To accomplish it, the researchers have created DNA microarrays with a twist. DNA microarrays are a common tool for biological research - for example, a tiny device gets embedded with a protein to find out what is happening. 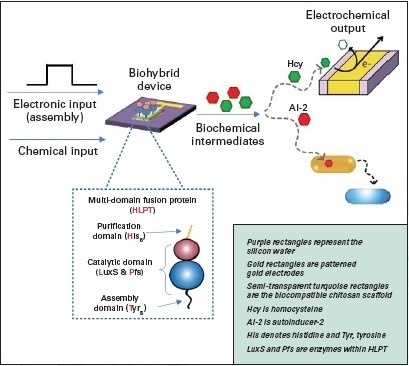 The biohybrid device receives both chemical (enzyme reaction precursor) and electronic inputs, and through biochemical intermediates, translates them to both electrochemical signals and biological cell responses. A representation of the components of the multi-domain fusion protein (HLPT) is shown . By varying the electronic inputs through the electrodes on which HLPT is attached, they can vary the attenuation of HLPT activity and thus affect the electrochemical and biological responses in proportion to the input. Credit: Created for the Department of Defense by Dr. William E. Bentley, University of Maryland

The new research takes that to the next level. Rather than using DNA microarrays to simply investigate what is happening, they have actually controlled cell metabolism - all on a chip. That's a real breakthrough, it could lead to genetically engineering 'smart' bacteria to defeat infectious diseases that could be utilized by 21st century bioterrorists.

The proof of concept was a reduction-oxidation (redox) molecule called autoinducer-2, which they used to tune what is called a multi-domain fusion protein - HLPT, which gets its name from the purification domain (His6),the catalytic domain (LuxS and Pfs) and the assembly domain (Tyr5). Since they were able to control the output based on the electrical input, it means they can change its biological behavior.

In the graphic above, you can see that their bio-hybrid device has both enzyme reaction precursor and electronic inputs, which get translated to both electrochemical and biological responses in the cell.

When the signal was introduced, the researchers got the cells to 'act together' and create a blue fluorescent proteinThe application was touted as being valuable for drug discovery and it certainly will make drug discovery far less expensive, but population-wide biological behavior that can be modulated electrically, allowing researchers to alter the enzymatic generation of a signal molecule, has a lot of potential for next-generation defense, exactly the reason that the Defense Threat Reduction Agency supported the project.

Such 'smart' bacteria could be programmed in the field, using a laptop or even a tablet, to automatically guide their actions based on chemical cues which reveal what bioterrorists might be throwing at soldiers.

*****
(1) 1 ebola death has captivated the news cycle but the 13,000 people who died from heart disease in the last 8 days will have to pay to have their obituaries printed.

(2) Though we have to lament the passing of those zany 1970s titles, like "Yesterday Dies Today" and "Twice Removed From Yesterday". "The Day After Tomorrow" seems to have really put an end to those weird descriptors: 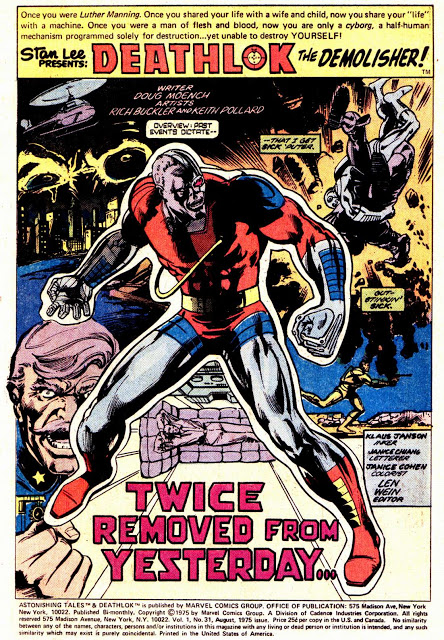