Hank Campbell
Cyber warfare, killer robots, biological pandemics due to mad scientists, the Bulletin of the Atomic Scientists has grown since the old days of just figuring out how to kill nuclear power.

You may not know the name of the activism group but you know their most famous creation - The Doomsday Clock. It captured the imagination of the public when it was unveiled in 1947 because we were clearly in the Atomic Age. Once we had a bomb, it was assumed it would be no time at all before some Romanian dame got our secret plans from a gullible physicist. For that reason it was set at 7 minutes before the Apocalypse - a nuclear holocaust, World War III. 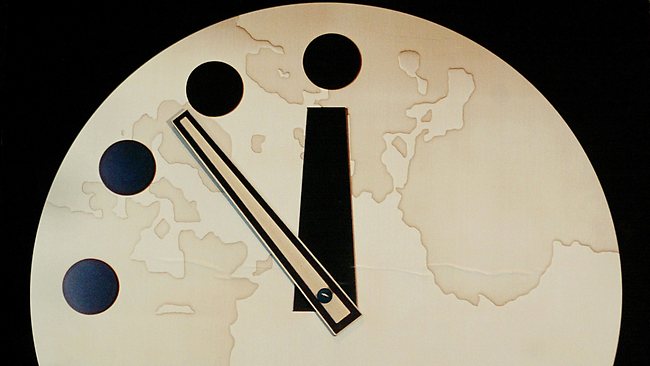 By 1949 the worst fear of the western world happened - we got confirmation that the Commies had tested a nuclear weapon of their own.

And so the clock moved. 3 minutes to midnight. No wonder school kids were taught to hide under the desk with paper bags on their heads. In Russia, they were probably doing the same thing, believing the capitalist pigs were likely to launch a nuclear first strike. It went up and down a bit, another minute closer in 1953, back to 12 minutes before midnight in 1963. Then back to 3 minutes in 1984 because Reagan did not cave in to the USSR and unilaterally disarm.

But then something weird happened. The USSR collapsed. What happened to the Doomsday Clock? Not much, it only went back to 17 minutes until our doom. Yes, even without the other superpower in the Cold War we were somehow only .01 from nuclear holocaust instead of .011.

Donations must have dropped because after that they quickly learned the error of their ways and now they keep contributors firmly in a state of panic - because, you know, the only thing that prevents world destruction is giving money to political science majors so they can update their website.

The newest causes are synthetic biology, nuclear energy and, of course, global warming, not to mention blanket hysteria about “technologies not created with malice aforethought" which, since we are dealing with one particular political and cultural demographic, is likely to mean genetically modified foods and modern medicine, like vaccines.

So we are back at 3 minutes until midnight again. But why wait for Time magazine or Slate to shriek about a completely arbitrary change in a completely fabricated metric when you can become a journalist yourself and shriek well before a corporate conglomerate instructs you to lament The End Of The World? They have made it easy with their handy Doomsday Dashboard and I have to tell you, it's impressive. Finally, all of the things that doomsday prophets want to think about in one easy location. 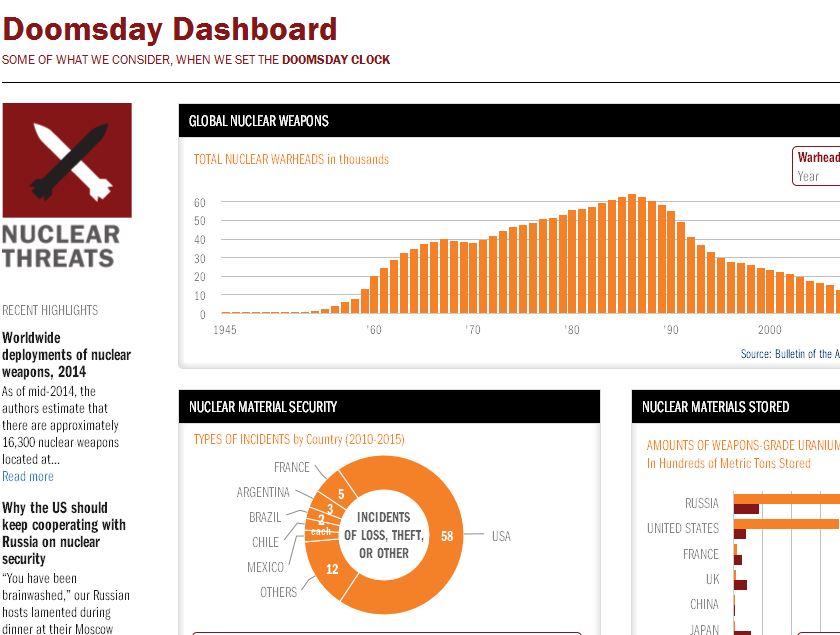 I am delighted by this because I often forget about The Bulletin. Unless you are a Democrat and have decades of scientific research on safe nuclear storage you want scuttled but need to still look science-y, or you need someone with no experience in nuclear science to run the Nuclear Energy Commission, they don't get much attention. Fortunately Alex Berezow of Real Clear Science reminded me they are out there. Like me, he is intrigued at their ability to have made-up numbers move almost in real time.

Bulletin of the Atomic Scientists is basically a secular version of one of those TV preachers who says you need to send money so he can help you reach heaven - but in their case they want to keep stuff from happening, like actual clean energy or nuclear bombs going off. It works, they have long claimed.

And you know what, they are right. The world hasn't been engulfed in nuclear fire, has it? So if you want to keep that not happening, you need to send them money. This bit of brilliant logic is most aptly demonstrated for the modern audience using the wisdom of "The Simpsons":
HOMER: Well, there's not a bear in sight. The Bear Patrol must be working like a charm.
LISA: That's specious reasoning, Dad.
HOMER: Thank you, honey.
LISA: By your logic I could claim that this rock keeps tigers away.
HOMER: Oh, how does it work?
LISA: It doesn't work. It's a stupid rock.
HOMER: Uh-huh.
LISA: But I don't see any tigers around here, do you?
HOMER: Lisa, I want to buy your rock.

Don't buy any magic rocks from people who care more about promoting fear and doubt than they do people.
Science 2.0
More Articles All Articles
About