Zicam And Other Homeopathy, Supplements; 51% Of Parents Say They Give Them To Kids Though They Know They Don't Work
By Hank Campbell | January 21st 2019 09:44 AM | Print | E-mail

Thanks to social media, advice on how to prevent a cold is everywhere and 51 percent of parents taking the  C.S. Mott Children's Hospital National Poll on Children's Health admit to believing in folklore and homeopathy even though 99 percent of them accept scientific approaches as well.

Colds are caused by viruses and spread most frequently from person to person. The most common transmission is mucus from the nose or mouth that gets passed on by direct contact, coughing, sneezing, doorknobs, etc. Therefore the most effective method for preventing colds is encouraging children to wash hands.

It won't work in stopping them all.  Kids will probably experience three to six colds each year.

But if your child experiences fewer colds it is no more likely it was Zicam or any other unproven alternative to medicine than if you bought them a magic rock(1) and put it in their room. Vitamin C, multivitamins or other products that claim to "boost the immune system" are placebos (2) yet thanks to President Clinton's disastrous 1994 DSHEA Act, which exempted supplements from FDA oversight unless people die, a $25 billion industry claims lots of nonsense with the simple disclaimer in small print that FDA has not agreed. 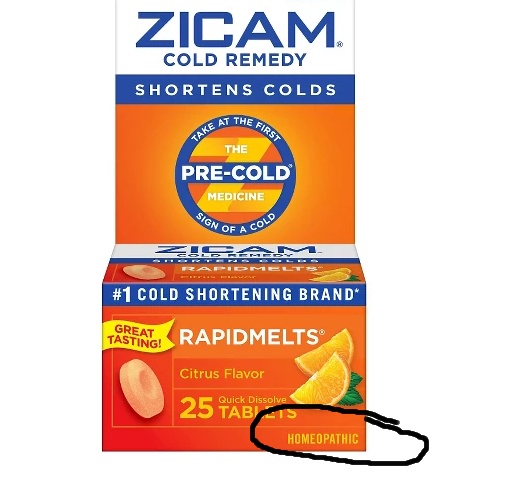 Your child's cold is not "all in your head" so don't be duped by "remedies" that assume it is.

The 51 percent who say they buy over-the-counter vitamin or supplement to prevent colds, even without evidence that they work that are the target market for companies that seek to exploit insecurity about protecting children by promoting nonsense.

Still, if 99 percent know the science then it is just 'if there is even a chance it will work' thinking, which means what P.T. Barnum said about a sucker being born every minute is still true. However, with the Internet and social media hucksters like osteopath Joe Mercola or products like Zicam can also prey on the fears of the poor to get rich. And that is what we should oppose.

Stop companies lying to people by sharing this article

And you should oppose it, just like you oppose racism every day and not just on Martin Luther King Jr. Day. These companies are lying to us, plain and simple. It helps to share science articles

Some parents clearly mix science and folklore. since in addition to washing hands 87 percent keep children away from people who are already sick and 60 percent would cancel or skip an activity if other children attending were ill. Unfortunately 31 percent avoid playgrounds altogether during the cold season, which is overkill.

There is no psychological adjuvant for you that will help your child with a cold. Don't encourage companies to treat you like you are a rube by buying the magic they are selling.

(1) An example of magic rock thinking from "The Simpsons":

(2) And buying placebos is dumb but it is a good thing they are in this case. The last thing you want if you are not ill is any product claiming it will "boost your immune system" since that is just woo terminology for creating inflammation. Want an early heart attack or Crohn's disease? Then an immune system boost is for you. Actual products that do help with cold symptoms actually suppress the immune system.