Hank Campbell
Despite being one of psychology's most memorable concepts and a genuinely good idea, Abraham Maslow's hierarchy of needs, immortalized in his 1943 paper "A Theory of Human Motivation" and later Motivation and Personality, needs a makeover, say some researchers.

Maslow's hierarchy says humans will fulfill basic needs before moving on to higher level ones.    If you're unemployed and losing your house because fuzzy 'jobs saved or created' statistics have no real value to you, for example, global warming will not be your biggest concern.

In Maslow's pyramid, food and water and sleep were at the base while philosophical ideas, like remaking Maslow's hierarchy of needs, would be at the top after literally nothing else is left to do.  The higher up the pyramid your needs are satisfied, the closer you get to self-actualization.   Physiological issues are most important, followed by security, then social, esteem and finally self-actualizing needs. 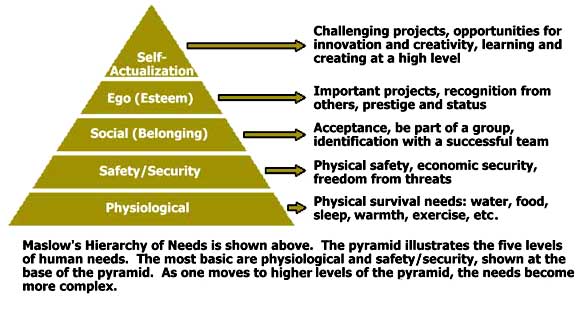 "Within the psychological sciences, the pyramid was increasingly viewed as quaint and old fashioned, and badly in need of updating," says Neuberg.  "It was based on some great ideas, several of which are worth preserving, but it missed out on some very basic facts about human nature, facts which weren't well understood in Maslow's time, but were established by later research and theory at the interface of psychology, biology and anthropology."

So is research important or not?   If Maslow's hierarchy was not supported by empirical research, how will hypotheses in evolutionary psychology be better?   We'll see.  The authors of the new pyramid believe status and mating are fundamental, which is in defiance of ... well, everything ... and they get rid of self-actualization entirely and replace it with being a good parent.

The new hierarchy of needs, presumably it would not be Maslow any more.  Credit: Doug Kenrick, Arizona State University

I am not inferring here.  They come right out and claim that artists and poets are consciously thinking about increasing their reproductive success when they feel the inspiration to paint or write.  Like science, artists do it for the chicks.

They are helped in that they know just enough biology to be wrong but not enough to know they are wrong.   "You could argue that a peacock's display is as beautiful as anything any human artist has ever produced," says Douglas Kenrick, another ASU professor of psychology. "Yet it has a clear biological function – to attract a mate. We suspect that self actualization is also simply an expression of the more evolutionarily fundamental need to reproduce."

So why isn't sex at the top then?   Humans are apparently baser than we thought and our fundamental driving process is to raise the children we gain by having sex to an age at which they can reproduce as well.  So parenting gets the top spot on the revamped pyramid.

They call these changes architectural extensions but they are a dramatic overthrow - and not grounded in solid theory or data.  The commentaries that are included in the same issue don't clobber the whole thing, it's bad for other evolutionary psychologists to say that anyone in a fledgling, controversial field is out of their minds, but rather just argue that self-actualization is not just a quaint artifact of the 1940s but makes more sense than saying everyone on the planet is driven by the need to be parents.