Hank Campbell
Garra rufa - "doctor fish' - are now trendy in some fish pedicure places.  The pedicuree dips their feet (see? I don't specify a gender or make any judgments, I am not Manny Pacquiao) into water containing the fish and the little critters exfoliate you by basically eating the dead skin from your toes.

But that may not be the grossest thing about it. The grossest thing may be what the fish give back.  Writing in My Health News Daily, they note some reason for concern from an upcoming Emerging Infectious Diseases article about these fish and 'zoonotic disease pathogens of clinical relevance' - namely the presence of bacteria like Vibrio vulnificus, which can cause wound infections and septicemia, and Streptococcus agalactiae, a common cause of infections in older adults and those with chronic diseases such as diabetes. 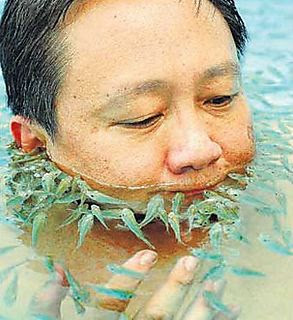 Convincing us that fish pedicures are a good idea may be proof that Asia has not forgiven us for Hiroshima. Link: The Burmese Ruby Diary

Yikes. That's not to say anyone should panic, the CDC does not have record of any illnesses due to foot pedicures, but regular nail salon foot baths have led to outbreaks of nontuberculous mycobacterial infections that left customers with boils and scars, along with really clean toes.(1)

Still creepy, even with an Asian woman instead of a man.  Link: Octoviana.com

It's not all bad. One study, albeit in Evidence-based Complementary and Alternative Medicine(2), found that Garra rufa does help with psoriasis.

10 states have already banned the use of fish pedicures, for various reasons:

1) It is not legally a pedicure unless an Asian woman is talking to her friends about you in a foreign language while she touches your feet.  Asian fish do not count, so it is false advertising in some states to call fish nibbling your feet a pedicure.

2) Hygiene. My hair stylist is not even allowed to use the same comb she used on someone else without cleaning it first - some skepticism that salon owners are cleaning these fish, or even the water the fish is kept in, between each pedicure is warranted.  Actually, if the water is ever cleaned I would be surprised.

3) These fish lack documentation. Since Garra Rufa is not native to the United States, there is concern by the US Fish&Wildlife Commission that if these fish are released into nature, they will get better test scores than American fish and then take all the good jobs.

4) Nibbling on your feet is cruel.  Why isn't PETA outside these salons with half-naked mermaids protesting fish pedicures?  They objectify naked human women over dead fish all of the time so you'd think starved fish forced to eat foot skin for sustenance would get some attention.

If it will help prevent cruelty to fish and also prevent disease, I will endorse PETA activists Lauren Quillow, below left, and Virginia Fort: