Hank Campbell
3 NASA employees out of the 22,000 people about to lose their jobs sat in a room full of loyal Democrats and listened to President Barack Obama talk about how much he loved NASA.  Then he talked about how he was gutting it.

Not everyone is buying hope in this instance.  Buzz Aldrin agrees with Pres. Obama that the Moon has been done but Neil Armstrong, first man on the Moon, and Gene Cernan, the last, think it is a  big step backwards to instead go to an asteroid.   I am probably not the first to say it but it seems we will now boldly go where no one really wants to go.

Harken back to 2006, before Scientific Blogging existed and the only science blogging on the Internet was militant, left-wing atheists telling us how much Republicans hated science because President Bush limited stem cell research to existing lines.

Imagine if George W. Bush had said back then that we don't need to fund human embryonic stem cell research because we are going to fund some future technology that is even better.   Or we don't need to implement energy alternatives because we can rely on some future magic science to cure global warming.  Would Democrats have cheered?  Yet cheer they did, at least about magic future science instead of current science in a recent press conference.

The return to the Moon Bush announced in 2004?   Canceled.   It's no surprise.  The Democratic War On Science started in 2007 when the newly installed Congressional majority whacked $550 million out of the NASA budget, specifically the Constellation program.  Since we are in alternative universe land, imagine if Nixon had come into office as a new Republican in January 1969 and canceled the Apollo program because it was started by a Democrat and was under-funded and not meeting its target?

More important than political motivations behind a "not my idea so it must be wrong" approach to science and technology cancellations is a monetary one; money spent by US taxpayers that is now gone?  $10 billion.

Was Constellation ever a really great idea?   No, and in that sense I agree with Pres. Obama.  I was puzzled why it was taking us 16 years to go back to the Moon with modern technology when it only took 9 years to go the first time, including creating everything from scratch using the computing power of a 2010 wristwatch.    But back then NASA was an outcome-oriented endeavor and now it is a bloated government monolith perpetuating its own existence so I am skeptical of most things they do.   And that old stuff still works so we don't need to recreate it.   A 38 year-old RS-18 engine from the Apollo program got fired up with liquid methane a short while ago and worked just fine.

The justification for a return to the Moon, according to NASA, consisted of:

1) extend human colonization,
2) further pursue scientific activities intrinsic to the Moon
3) test new technologies, systems, flight operations and techniques to serve future space exploration missions
4) provide a challenging, shared and peaceful activity to unite nations in pursuit of common objectives
5) expand the economic sphere while conducting research activities that benefit our home planet
6) engage the public and students to help develop the high-technology workforce that will be required to address the challenges of tomorrow.

Sound like hoopie?  Yeah, NASA is clearly lacking vision and no one is making a movie about those bullet points any time soon.   Want to excite kids about space?  Have them watch The Right Stuff. #3 is unnecessary given that we already know how to go into space, #4 is just annoying feel-good pablum, #5 is meaningless speculation and #6 is unlikely, since no one is going to get excited about going back to a place we went 41 years ago.  That leaves extending human colonization and science intrinsic to the moon as compelling reasons.

Well, are they?   We aren't running out of land so colonization is not a pressing concern and improved energy would make more water potable which means we could  have more people living and growing food in places they can't easily inhabit now, so energy research may be better use of tax dollars.   But human colonization is exciting and not all science can be results oriented.   There is terrific cutting edge stuff that needs to be tested where it counts, like an oxygen generator that would extract it from silicon dioxide and metal oxides in the ground on Luna. That is cool technology.

And water on Mars is a game changer in lots of ways, as Sandy Antunes wrote about.

Reaction from those outside the industry is all over the map.  Space-policy analyst Howard McCurdy of American University in Washington, D.C. says he's intrigued by Obama's willingness to "leapfrog" over smaller goals.   Time wonders if Obama's NASA strategy has fizzled at launch  because making Floridians mad during a bad economy is not a great idea.   Not that Florida has ever been important in an election or anything.   Others are wondering if Obama 's American self-loathing is bleeding over from foreign policy to domestic issues and he wants to weaken America's industrial base.

Ask California what onerous taxes and a hostile business climate does to its finances and you might agree that driving Lockheed-Martin and Boeing out of business is a bad idea for America.    Sure, landing on an asteroid in 2025 sounds like a great plan, but what will replace those lost jobs now?

I have a solution.  Given the administration's willingness to discount lost jobs after January 2009, boost their stimulus performance by lowering the baseline and even include un-lost jobs as jobs saved or created in Congressional districts that don't actually exist, he can forget the 22,000 people who will be out of work and instead count them as 22,000 jobs saved by proposing some new, even more awesome technology than what Bush and evil Republicans proposed.

Pres. Obama has already agreed to spare one part of the Orion space module program developed as part of Constellation.    So it might makes sense to get rid of names like Ares V and Orion and replace them with something that can help him in 2012 and help NASA get somewhere, funding-wise.

Helloooooo Baracket. Or Barocket, or however he wants to spell it. I think it will catch on, in the heartland. 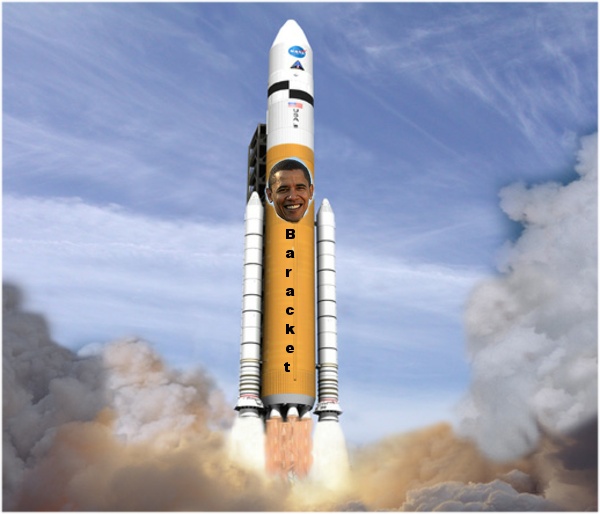 Think Obama will want to cut funding when this baby's specs get read to the public?  I bet not.

And back to NASA, they need to get better public relations.   Maybe the best reason to go into space?   How else will men from Earth meet alien babes?
Science 2.0
More Articles All Articles
About