Hank Campbell
I get asked a lot about Science 2.0® and why I chose to start something like ScientificBlogging.com, because science is such a niche.   Is it?  65 million people respond to surveys that they are interested in science. Since there are just over 300 million people in the US and 10% of those can't read due to age or infirmity, that means almost 25% of America alone considers themselves science fans.

I've heard scientists lament that the public is somewhat dumb and they'll cite statistics on whatever cultural issue they want to complain about and map results to their gripe but I say just the opposite; I have been stunned by how much more science people know than when I was younger - but they filter it through their politics.   So if someone says global warming is economically motivated rather than scientifically, you can bet it's a Republican and you will usually be right.  If someone says the dispute about causes of global warming is funded by Exxon, you can bet it's a Democrat and you will usually be right.

Insert evolution understanding or whatever cultural worry you want and somewhere out there a pundit is generating pageviews getting people to rant about it.  In some sense, it's because scientists don't think very much of the public, though the public certainly respects scientists.

In another sense it may be that scientists' view is more narrow than someone like me, who has to straddle a few worlds - I am more gameshow host than scientist but still likely to be the smartest guy in every room I enter.

The public respects smart people but how mainstream cool is science?  Pretty mainstream, I argue.   David Sloan believes that because science does not have fans the way sports does, it is not mainstream, and he could find an argument in the mass media, where budgets for science journalism have been eliminated, unlike sports.   But budgets are not being cut because fewer people read science, they are being cut because people can instead get it from people who know what they are talking about - like writers here.  You don't have to have 500 homeruns to write on baseball but a smart audience wants experts in science.

Sloan uses as an analogy the television drama "Lost", where a new person can literally be lost if they start watching now, and compares that to science comprehension.  And it's a good analogy.  Someone could do a synopsis (1) of "Lost" but it would be pointless because there is too much to know and so it goes with science; it's hard to do a synopsis of string theory or dark energy because it sounds made up unless you are paid to believe it.  Science journalists can be that trusted guide, he says, but that is a different matter than what I want to discuss, which is whether or not science is part of mainstream culture today.

Is science as mainstream as sports?  Not directly, but sports is something anyone can appreciate - for $50 I can take my kid to see a basketball game and something meaningful will occur in 3 hours.   Not so with science but sports has dedicated television programming as does science.  Science has more magazines than sports does.


Science is so mainstream scientists even have their own Rolex watch - the Milgauss, named such because it is resistant to a magnetic flux density of 1,000 gauss, so it can survive in reasonable magnetic environments.   And it's advertised on the back of  Esquire magazine, which every scientist reads, it seems.  Cost: only $6,200, so clearly a price point that is attractive to the average researcher.  Or get a knock-off for $98.

And politics has taken notice also.  Science had election-year clout despite the vast majority of scientists being Democrats.  ScienceDebate2008 at least got answers from both candidates on science positions, something that was never an important issue for office-seekers before.   Hillary Clinton talking about her favorite baseball team was just fluff but people wanted to know where McCain and Obama stood on science issues of the upcoming decade - except ScienceDebate did not ask about evolution or vaccines and autism, and we know both candidates failed on that second one.

It isn't just in the US political climate that science is taking center stage.  In the recent UK election campaign there was a debate called "Science and the General Election 2010" and both sides were falling all over themselves to talk about how much they supported science and BBC journalist Susan Watts, who chaired the discussion said, "In the 15 years or so that I've been covering science on Newsnight, I've never felt such a level of public interest in science."

That's a pretty solid endorsement from a media person at a time when many are cynical about science understanding.

Casual science fans have talked to me at any number of events and laid out data I am surprised they know.   Actress Christine Baranski peppered me for 20 minutes at the World Science Festival with a dizzying amount of facts regarding the science of food production. 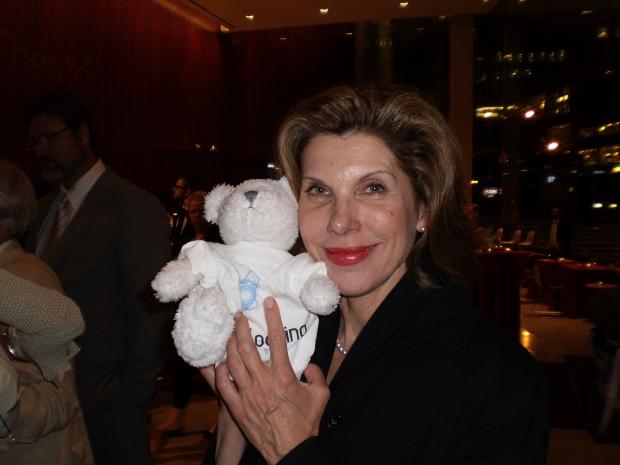 Bloggy with Christine Baranski.  Unlike in politics, actors who get involved in science outreach actually know what they are talking about.

And can you name a series on television that stars an athlete?  Even football, the most popular sport in the world, only has a show about their wives, not the players themselves.

But scientists have a show about them.  Pretty accurate too, as this clip shows.


So science may not be quite as mainstream as sports but that's because sports are accessible to smart and dumb alike - and anyone can get an entry level knowledge of sports and become a blogger about it.   The bar is a little higher in science but it's not impossible.   After all, I am allowed to write here.

(1) Example of a great series synopsis; the opening credits of The Six Million Dollar Man.  In less than two minutes you learned everything you needed to know about the show.