Hank Campbell
The United States of America hasn't been interested in building big new physics collaborations, such as the Large Hadron Collider, in the last 20 years, since the Clinton administration canceled the Superconducting Super Collider. The James Webb Space Telescope overruns and President Obama canceling NASA's Constellation program confirm why America has a crisis of confidence about building big and there is a belief that maybe we should stick to small experiments like cute robots on Mars.

It isn't just the perception of a glorified job-works culture for government union workers that makes the public and even politicians skeptical of Big Science. There is also not much confidence that American environmental rules and cultural and social gerrymandering by special interest groups can be overcome in order to make anything large enough to matter. Chile let engineers blow the top off a mountain to make way for the European Extremely Large Telescope (E-ELT) but the last time America wanted to build a large terrestrial telescope, environmentalists insisted a Mount Graham red squirrel would be devastated and our ecosystem would collapse, despite every science study showing otherwise - and the activists won. Arizona, with fully a third of its nights cloudless, is perfect for astronomy, and protecting that sky would mean less light pollution, less regular pollution, and more educated white collar workers from all over the world and the cultural benefits that brings. But it was not to be and won't be any time soon. Just the threat of environmental lawsuits, especially when a party that caters to environmental activism is in power, brings an icy chill to bold science proposals.

Instead, by default we are turning other countries into science havens. But maybe those big projects are overrated anyway. Despite claims that America will "lose leadership" if we don't fund every single thing, we still send scientists wherever they get built. The LHC got built and the Higgs boson - the God Particle, as it was called when it was being proposed - was found. Europe built the E-ELT and when Americans want to use it, we just have to pay. It's a lot less money than the cost of hosting it.

Small projects may also bring a lot more value for the money. Every year that the Webb Telescope hemorrhages money, other valuable science projects get starved or delayed because budgets are finite. Small may be the way to go to protect a lot of other experiments from being harmed because one group underestimated cost and overestimated completion time in order to become 'too big to fail'.

A few weeks ago, Dr. Natalie Roe, Director of the Physics Division at Lawrence Berkley National Laboratory, testified before a Congressional subcommittee about the future of American particle physics - and to ask for some money.  Government is a tough crowd for physics these days. No one in the Obama administration was hand-wringing that America should have found the Higgs boson, and their interest in science seems to be related solely to global warming, but this was the House of Representatives, controlled by Republicans, and Republicans have always been fans of physics. Reagan signed off on the SSC, and it was Democrats who killed nuclear energy science in the US over Republican objections.

Republicans want a compelling argument for particle physics. Roe was there to argue in part for DESI, the Dark Energy Spectroscopic Instrument, which would try to figure out if dark matter and dark energy exist in any way we can understand. It would be madness to build a large project to try and find what no one can even define, but it's worthwhile pursuing it as part of numerous small projects. The cost: a paltry $40 million spread over four years. The National Institutes of Health has a budget almost 100X that and, as NIH director Francis Collins worries, two-thirds of those results can't be reproduced.

As we have seen with Faster Than Light neutrinos and cosmic inflation results, you are going to get your results confirmed in physics. No one thinks physics is an old boys club of friends all blocking out critics and detractors, physicists love to tear each other down.

And the lack of focus on Big Physics experiments makes people work smarter. Though the original Fermilab experiments are no longer in operation, it is still being used for new things.

The Sanford Underground Research Facility (SURF) got built using state money, private donations and some federal funds. Yes, private donations, just like most fundamental science used to get done before the Reagan administration fell in love with basic research and insisted the government should control the bulk of it. It's in an abandoned mine, that means no hassles with environmentalists, who are busy protesting a pipeline over an aquifer they never heard of until it was about to be approved.

The site already hosts LUX, also searching for 'Dark Matter', and will host the neutrino detectors
for the Long Baseline Neutrino Facility, which will catch a beam sent through the Earth's crust from 800 miles away at Fermilab. It will be intriguing because those neutrinos decay into different states before they reach the detectors. By comparing them in a controlled environment we may start to figure out how matter won in a universe where we should have just as much antimatter somewhere.

Smaller projects also keep science under the political radar. Over a decade ago, President Bush and the Republican Congress doubled money for the NIH. What has happened since then? NIH funding doesn't even match our moribund economic growth any more. But in the last five years we wasted $72 billion on solar panels, wind turbines and other pet projects that haven't helped anyone. 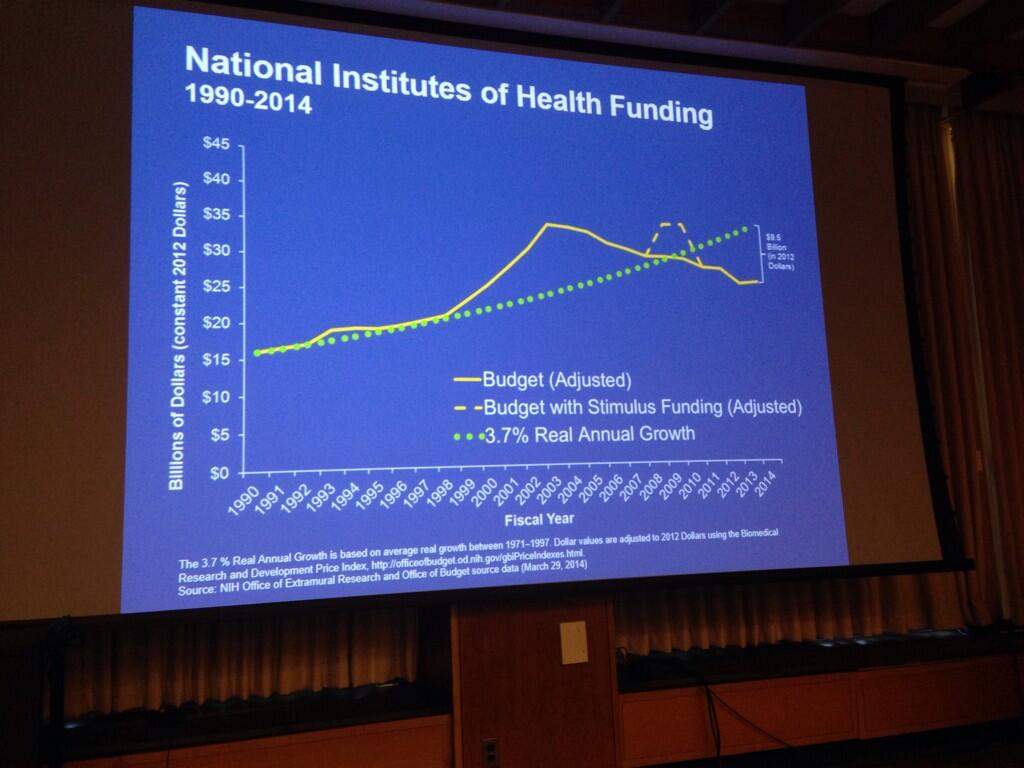 Who is going to defend the life sciences? Biologists and much of science academia spent a large part of the last decade vilifying Republicans as being anti-science, even though they doubled the NIH budget, so Republicans are unlikely to bother supporting a demographic that overwhelmingly hates them, and if it is not attached to global warming today, Democrats don't care.

So Roe may have been wise to appear before the House Committee on Science Science Subcommittee on Energy to make the case for more physics funding - because the Chairman, Cynthia Lummis, is a Republican. Republicans have always loved physics and, let's be honest, funding is what counts in supporting science, not pretty words. As the NIH and NASA and physics communities all know, Republicans fund science more than Democrats.
Science 2.0
More Articles All Articles
About