Hank Campbell
James Ephraim Lovelock, CH, CBE, FRS, Ph.D, aged 92, is a chemist and creator of the Gaia Hypothesis. He is called the 'Godfather of Global Warming'.

What he was, to most people, was an alarmist more on the order of President Obama's Science Czar John Holdren, a doomsday zealot. And I don't mean 'alarmist' in the American political sense, i.e., anyone who accepts the science of climate change - I mean a real End Of The World Is Nigh prophet.  So silly even the hysterical poster child of Think Progress, Joe Romm, believed Lovelock was over the top.

Now Lovelock believes he was over the top also.  In April he told MSNBC's  Ian Johnston that he had been  “alarmist” about climate change and that amateur environmental commentators like Al Gore were too.

I didn't think much of it in April, just like I ignore anything John Holdren or Think Progress says about the climate.  Being irrational on one crackpot pole and then switching to the other is not really telling anyone much, though it might cause TIME magazine to retract their 2007 designation of Lovelock as one of the “Heroes of the Environment”, when the media had declared the science settled because IPCC media talking points declared it so. It was a simpler time.

What gives? Well, being 92 years old helps.  As he put it then, his age means he can come out and admit if he made a mistake. Dr. James Watson, irascible co-discover of the DNA double-helix, has no problem speaking his mind, nor does Dr. Edward O. Wilson. All have been adored, and then vilified, by progressives and then embraced by conservatives when progressives turned on them, despite changing nothing at all about their beliefs, and just saying something unpopular.

Like Holdren, Lovelock has attracted friends who have had their own suspect beliefs.  Prof. Lynn Margoulis, co-creator of the Gaia Hypothesis, denied that HIV is an infectious virus and believed that the September 11th, 2001 terrorist attacks were not terrorist attacks at all.   To show you how suspect science bureaucracy can be, Margoulis was a member of the National Academy of Sciences since 1983 while Carl Sagan was denied. I guess Sagan was not doom and gloom enough.

Now, while his critics contend he must be senile, he actually sounds more scientific than he ever did before.  He told The Guardian's Leo Hickman that sea level rises may only be 2 feet in the next century, which surely had to send environmental activists (you know, political science majors) into a fit. The American fringe had already barely tolerated him because he supported nuclear power - as did everyone behind the Kyoto treaty in 1998 except American environmentalists - and correctly believed that wind vanes should stay in the 13th century where they belong. 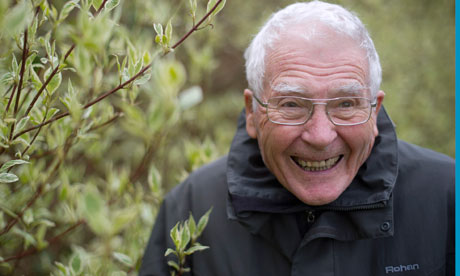 Now he has provoked them even more than he did in April.  He has called out the environmental movement for not embracing natural gas today, when decades ago it was the Next Big Thing.  "Gas is almost a give-away in the US at the moment. They've gone for fracking in a big way. Let's be pragmatic and sensible and get Britain to switch everything to methane. We should be going mad on it," Lovelock told Hickman.

It's an odd turn-around for the man whose 2006 book predicted billions of us were soon to die from global warming and whose rampant conjecture directly led to the most laughable idea of 2007, the Norwegian "Doomsday Vault" which was going to help us restart the world after the apocalypse.

Now he turns the guns on everyone with an honesty that is puzzling. "I'm neither strongly left nor right, but I detest the Liberal Democrats. They are all well-meaning, but they have mostly had little experience of power. The coalition has behaved disgracefully on environmental and energy policies," he said.

Can we take this man seriously?  If John Holdren suddenly embraced BPA, I'd remove all the plastic from my house.  Lovelock is kind of like that.  It's fun watching the process but I can't imagine he can be part of a serious policy discussion, the way he bounces around.

"It's just the way the humans are that if there's a cause of some sort, a religion starts forming around it. It just so happens that the green religion is now taking over from the Christian religion. I don't think people have noticed that, but it's got all the sort of terms that religions use. The greens use guilt. You can't win people round by saying they are guilty for putting CO2 in the air."

He displays equal disdain for those who do not accept science on climate change: "They've got their own religion. They believe that the world was right before these damn people [the greens] came along and want to go back to where we were 20 years ago. That's also silly in its own way."

Well, political cults are not all that much different than religious ones - and science has its cargo cults too. I had never considered that environmentalists might just be closet Catholics. Go figure it would take an Anglican to see it so clearly.

"Whenever the UN puts its finger in, it seems to become a mess," he says.  No one outside the UN and science bloggers disagree with that. The IPCC has gone full speed ahead into losing all credibility by trying to make grey literature legitimate using the UN and instituting progressive good works in the way of geographic and gender quotas and making the quality of the scientists secondary.

2012 is turning into a weird year.  The Brits lost Lovelock and the Germans have lost Fritz Vahrenholt. If we Americans have Al Gore change his mind, we may be really screwed.  Though Lovelock doesn't think so; he still believes in the Gaia Hypothesis and now he says what left-wing people used to say and right-wing people insist now - that humans are too puny and insignificant to have a big impact on the environment, the planet will just kill us off and replace us with someone else if we get too uppity.
Science 2.0
More Articles All Articles
About