Hank Campbell
There are some places where food is easy to grow and some where it is not. Nature is not fair.

Expecting companies in countries with food to ship it everywhere for free is not practical and the poorest people don't have the money to import food, so they are stuck in a hunger Catch-22. There are differing schools of thought on how to solve the problem.

The United Nations is not specifically saying poor people should eat bugs, of course, but who are we kidding about the bug versus steak consumer out there?  The Food and Agriculture Organization of the United Nations Director-General, José Graziano da Silva, spoke yesterday at the International Conference on Forests for Food Security and Nutrition in Rome and highlighted a new study showing how nutrient rich insects are. Well, they are. We all knew that, even they have been advocating it since 2008, and there is certainly no shortage of bugs.

They say 2 billion people are eating insects now, which is not the best endorsement of Big Insect as viable food for the masses; 31 percent of consumed bugs are beetles (usually larvae, namely mealworms) and 18 percent are caterpillars while bees, wasps and ants make up 14 percent. Another 13 percent are grasshoppers, locusts and crickets. In some tiny segments, bugs are an expensive delicacy but, really, for the most part they are eaten by people who have no other choice and so it becomes a part of the culture. 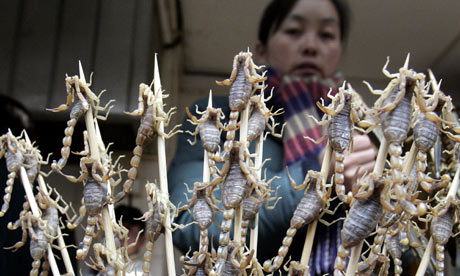 Deep-fried scorpions on sticks in Beijing. The scorpions won't kill you but the Hepatitis and the deep-frying sure won't help you. Photograph: Claro Cortes/Reuters, link: Guardian.

“We are not saying that people should be eating bugs,” said Eva Muller, Director of FAO’s Forest Economic Policy and Products Division, which co-authored “Edible insects: Future prospects for food and feed security”.

Except we know they are. They set up a FAO project in Laos to get 15,000 people farming insects and they never stop insisting this will mitigate CO2 emissions from meat production. FAO is the same organization behind "Livestock's Long Shadow", which was vegetarian activism masked as data and claimed that if you ate meat and walked to the store to buy food, you were harming the environment more than if you drove your car.  Their metric for that was two of the bigger pseudoscientific hoaxes of the last 30 years - it takes a gallon of gas to make a pound of meat and it takes 140 liters of water to make a cup of coffee.  'Virtual' resources were all the rage before the public understood simple arithmetic (i.e. after I debunked both here on Science 2.0). The FAO makes sure to note that if we all ate bugs, they would produce a fraction of the emissions that meat farming does not.

And how soon before environmental groups turn on bug eaters, the same way they have turned on everything else?  Even leaving direct consumption alone for a moment, can bugs even replace fishmeal as livestock food, leaving us with more fish to eat?  What about disease bugs carry?  Sure, insects are biologically different from mammals and can't give us their diseases but since bugs can bite us and transmit our diseases, how can we be sure they won't get eaten by a cow and then the cow gives us some disease? Can anyone prove that can't happen?  It's a regulatory headache that has no one interested in solving it - outside the UN.

Look for that scary, anti-bug fund-raising brochure somewhere around 2023. The bug diet is not popular in rich countries yet so activists have not used it to raise money, the way they now do with things they used to favor, like ethanol and natural gas and wind and genetic modification.

If you are stuck in the wilderness, bugs are dense sources of protein, that's not a question. But is it a viable, economic-field-leveling industry the way food is? No, that is why the food that is popular became popular. GMOs level the economic playing field in agriculturally poor countries and that is a key reason why Europe doesn't want them imported - Europe has far more agriculture subsidies than the US or anyone else (85% of the world total is given to European farmers) and allowing poor people to compete in their wealthy marketplace would mean even more subsidies for its citizens.  Bugs, however, remain difficult to farm and a regulatory nightmare before they can be allowed for mass consumption so it's a 'safe' thing to advocate - for UN employees in rich countries, about poor countries.

I'll stick to eating bugs by accident at outdoor parties, thanks.  But then again, I was lucky enough to be born in one of the Agricultural 1% countries so if I want insects, I can soon overpay for them at Whole Foods - now that the UN has told that demographic what to think again.
Science 2.0
More Articles All Articles
About