Hank Campbell
The National Science Foundation and various other government groups with more funding than knowledge of the public wastes billions of dollars on STEM (Science Technology Engineering and Mathematics) outreach, using the strange mentality that smart kids who might otherwise become veterinarians or game designers need to become scientists and engineers or America will collapse.

In reality, we produce far more Ph.D.s than can be employed so this fetish with higher education is more like inventing a problem so that government can solve it.    The generation of scientists in America today that are PIs and professors grew up in an era where there were no unlimited student loans or expensive outreach programs and America produces almost 32 percent of the world's science.   Not too shabby.

Scientists are inspired by nature and the world around them.  They are curious.  Outreach does not create curiosity.  What outreach can do, and it doesn't take any government money, is spark an interest in science.  It needn't be clever, it needn't have cartoon characters - but it doesn't hurt.

It also doesn't hurt to be topical.  It used to be that Japan took everything from the rest of the world but in the last two decades they have taken to exporting culture as well.  I have long contended that Pokemon was payback for Hiroshima, though I can't prove it.   If you were new to the Japanese comic genre and read something like "Crying Freeman", you were likely blown away by the masterful storytelling.  These were not kid comics, they just looked it. Crying Freeman.  A comic book, but definitely not for kids.

And more modern manga slip in some science as well.  I recently got a chance to read The Manga Guide To Relativity by Hideo Nitta, professor in the Department of Physics at Tokyo Gakugei University, Masafumi Yamamoto, PhD in Applied Physics from the Graduate School of Engineering at Hokkaido University, and Keita Takatsu.  Relativity is not trivial so I was intrigued at how they might be able to pull it off without sacrificing the science.

There are some stock elements that the Western world will have to adjust to, a hot, young teacher whose face contorts in explosive ways at random moments, anthropomorphic talking pets, androgyny (the main character has to learn physics or be the vaguely weird principal's "personal assistant" for a year - yikes!), but for the most part it is a story about romance and science.  Really, that's what all great stories are.


You did not learn physics from a teacher in a bikini?  Now you can!

I used Otaku in the title because that is a colloquial way to refer to highly serious fans and that was what I wondered - was this a gimmick that would be bought by fans of manga but not regular kids who would be attracted by the story?  Off to a manga convention in Sacramento I went...in search of answers.

I showed the book to people and everyone thought it was clever - but no one had bought it nor did I see it for sale, which seems like a shame.  I did get a picture of Bloggy, drawn manga-style.


Bloggy the Science 2.0 mascot as drawn by Melissa McCommon.(1)

It's good science but how is it not manga, you may be asking?  It is not right to left.  In many cases they are now leaving the manga in the original right to left format - as the popularity has grown, some manga artists will not allow their art to be flipped to cater to decadent western tastes but there is also a likely practical aspect - it's cheaper to leave it alone.  I don't know if this was done right to left in original form.

Regardless, having brought back various 'real' manga from Japan on trips I took I never noticed my kids having any trouble in its original form and the storytelling was good enough they 'got' it without being able to read the language.

However, on the science aspects it is as good as you can get.  The barometer will be young people and, while my data is not comprehensive (a set of one) my daughter read this book and when I asked her about it, she said the story was good and was intrigued to find that general relativity was special and special relativity was general.    That's as good an endorsement as you can get. 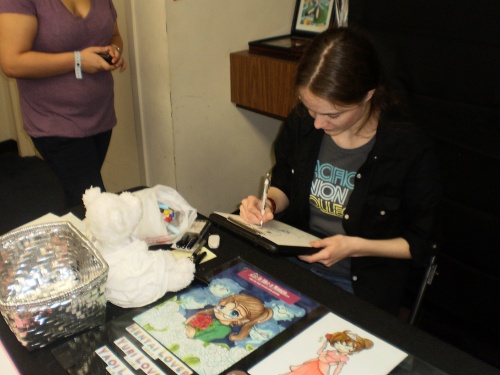 but as a bonus got his picture taken with a stormtrooper.  Daughter Paige(left) did not ask, "Aren't you a little short to be a stormtrooper?" though clearly that would have been justified