Hank Campbell
I am writing a book on mitochondria and after a few months of research you begin to see a common thread - serendipity.  Sometimes big things happen because of what seems to be luck, a group of people all happen to be in one place at one time, they are all spurred on by each other and then dramatic things occur.

In the 17th century we had the Geniuses of Britain, with Newton, Halley, Hooke, Boyle and Wren, and then we had the Founding Fathers in America, and recently on a smaller scale, in the 1960s, we had The Beatles and The Beach Boys, where Brian Wilson essentially lost his mind trying to outdo Paul McCartney, putting out fantastic material in a two-year period that resulted in some of the best pop music ever, thanks to the confluence of them and Bob Dylan and others.

Of course, sometimes groups make their own luck, by bringing together people to tackle a problem. In the first half of the 20th century, you could easily have called mitochondria "the Rockefeller Institute organelle", because if you wanted to study the energy factories of our cells, New York City was the place to be. What intrigues me about the early history of mitochondrial research is that, though mitochondria are vital to biology today, most of the early science was instead done by chemists. It was the chemists' organelle.

Mitochondria are, basically, kind of weird, and that is because they contain puzzles and inconsistencies left over after billions of years of evolutionary history. Given their importance to cells and our everyday lives, it makes sense that biologists would need to study them, but why would a chemist want to do so? I've interviewed various people for the book and it becomes obvious that, in the past, when fields were less sharply segregated, it was probably necessary to cross fields - Professor Fred Crane, who discovered Coenzyme Q, the body's natural antioxidant, in 1957, simply needed a job and, as he put it, the climate for unfunded academic plant physiologists was difficult, so enzymes using beef hearts was going to pay the bills. It turned out that his perspective as a chemist and his knowledge of plants allowed him to see what people specialized in the field had not been able to see.

The academic climate is different today. Science is not only well-funded, it is a high-paying career with a great deal of prestige. As a result it has become rather specific, you won't get R01 funding being a jack-of-all-trades. So in the modern era it is an outlier when biological breakthroughs are instead made my chemists. For Wired and an article here, I interviewed Dr. Michael Murphy of Cambridge about his work on targeted molecules in mitochondria. Murphy is a chemist who got his PhD in biochemistry and he is noted for creating the first targeted antioxidant that made a meaningful level of antioxidation bioavailabe inside mitochondria, called MitoQ.

It seems obvious that if an antioxidant is going to preserve mitochondrial function - keep them going at optimal performance by mitigating decades of misfires and damage - it has to get inside mitochondria. Since there could be a hundred of these inside a cytoplasm inside each of a trillion cells, and mitochondria has protective lipid bilayers to keep the outside environment from making random changes, it was not a trivial task. Eating 70 bags of spinach a day is not practical and taking Vitamin E supplements did not work - it never got inside mitochondria. Yet the idea to make an antioxidant bioavailable had been around for as long as it had been known that protons cause the mitochondrial motors to turn.

It still required an applied solution and Murphy did not do that alone. To get deeper into understanding why mitochondria work they way they work, Professor Rob Smith, now retired from the University of Otago in New Zealand, got on the phone with me to explain the chemistry solution to a problem that had plagued mitochondrial experts for decades. 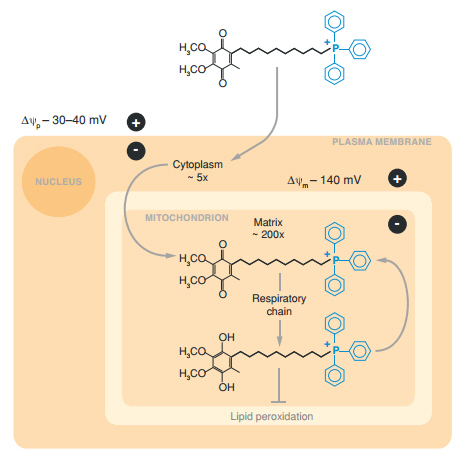 If you say you want to leverage covalent attachment to the triphenylphosphonium cation through an alkyl chain into an organelle, even most chemists will want to go find someone more interesting to talk to, but if you say you want to use a salt to piggyback an antioxidant into mitochondria, and prevent a lot of diseases, it begins to make sense why a senior chemist would take up the challenge with a young scientist studying them.

"I had heard of antioxidants, of course, but I was not interested in them as a chemist. The bit that interested me was Mike’s idea of connecting a known antioxidant to a carrier function to create new composite molecules," Smith said. "And Mike had a chemistry background so he appreciated the challenges and risk involved in trying to make the material."

But, I noted, phosphoniums had been tried in the past. Most people would just say 'it's been done' and move along.

"Right, each of the two components were not new chemicals to a chemist, but I liked the challenge of binding them together without negating any of their important characteristics," Smith said. "So it was a chemical novelty that attracted me, but also the fact that if we made something like this then Murphy had the drive to see if it was biologically active."

Since phosphonium salts going into mitochondria had been done since 1970(1), what did you end up doing differently?

The big question for young scientists entering into the field would be, how long did it take to have success? Enter serendipity again.

"MitoQ10 [known today as simply MitoQ - Hank] was the second one and that was the one we made together. Mike made the first one (mitoE) himself in my chemistry lab over summer vacation. After we created MitoQ10 we still created new variants of mitoQ(n) and it turned out that the original one, mitoQ10, is the most bioactive. "

So it was luck.

He laughed, "No, it was more practical. We used a 10-carbon chain because it was easiest to make due to cost and the availability of the starting materials. Now we know a lot about how mitoQ10 operates and why it is so effective but we didn't then, so we kept going with new ones because it worked and we wanted to see if it worked the best. If the first one we had made was, say, mitoQ3 - which is much less bioactive for reasons we now understand - then the whole mito story from Smith and Murphy would have finished (in a whimper) in 2002.  So perhaps you're right, a little bit of luck was on our side!"

Most of the early work in mitochondria was lonely. Certainly, researchers used the work of others, Peter Mitchell got a Nobel Prize for a chemiosmotic hypothesis of ATP synthesis that was built on 70 years of people before him, but you don't see a lot of true collaborations across disciplines in the past. How did you decide who did what?

"It was and is very collaborative, we've worked closely together to design and test our molecules. We've made molecules that are easy to prepare but have no biological activity and Mike has suggested molecules that could be hot biologically but that we were not able to make. We're both research driven so when we find we cannot make a molecule or the biology is not as expected we easily agree to give that project up and try another one. Both sides being active researchers and used to the highs and lows that that entails helps us make those strategic decisions. We have been fortunate that most of the systems we have tried have been successful to a greater or lesser extent."