Hank Campbell
Some Americans may regard the half of U.S. science that works in academia as overtly partisan due to a lack of political diversity, but it doesn't affect science issues. Though the anti-vaccine, anti-GMO and anti-energy movements are overwhelmingly populated by the left, scientists readily attack those positions because evidence matters most to American scientists.

Not so much in Europe. American academia may have a political litmus test for getting a faculty job but that doesn't bleed over into science research. In much of Europe you are more likely to need to check off all of the correct cultural boxes to get a job in the first place. And you had better not deviate from the plan.

Germans suddenly became anti-nuclear after the Fukushima accident in Japan, for example, but turn a blind eye to buying natural gas from the east extracted using fracking. The reality that German fossil fuel companies are making billions with contracts for "instant on" energy to offset the fickle nature of wind and solar rarely gets mentioned when politicians are trumpeting their alternative energy uptake and German scientists know not to rock that boat. It would be asking for a real cultural headache.

When it comes to food science, the best "demon corn" pictures come from Germany and though scientists all across Europe have tried in vain to get Europe to be more scientific about policy decisions (1), a group of Germans including geneticists and a Nobel laureate are making a different kind of gamble - they are instead endorsing GMO labeling. 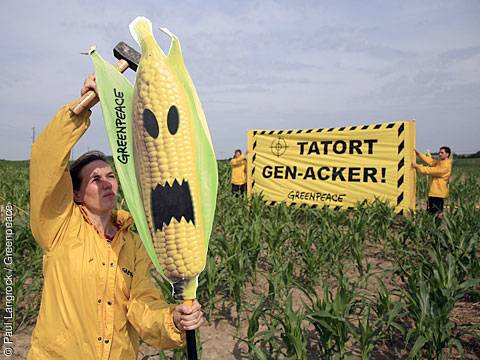 Europeans like labels. Americans like labels too. We don't read them, but we like them, and that is used to nefarious ends by clever environmental marketing groups, who make sure not to advocate for real labels, just ones that help them. They want GMOs on a label, for example, but know the $105 billion organic industry would collapse if labels had to include all of the pesticides and chemicals in fertilizers their businesses use. Stonyfield CEO Gary Hirshberg, the money behind the "Just Label It" campaign, was incredibly uncomfortable hiding behind a weasel phrase like “We’re complying with FDA laws” when a journalist asked him for the ingredients in the 'natural flavor' for his organic yogurt, but he ducked the question just the same.  He made sure the Vermont GMO labeling law exempted his company too.

A group of German scientists is trying to make the hypocrisy of labeling efforts transparent, by petitioning for true GMO labels - they think true labels will puncture the myth that GMOs are something scary the public is being protected from by environmental lobbyists and the politicians they fund.  They want to have a label when GMOs are used in anything and not simply be hand-picked convenient definitions that exempt products made using genetic modification like mutagenesis or are just in the product supply chain. How did that happen? Some of the researchers are now retired, so have no reason to play the political game and keep quiet any more, and some have given up on work in Europe because of the stigma so they also have nothing to lose.

Because anti-science groups need to pick their battles carefully, Greenpeace and others are against that kind of label. “There is a difference between a piece of tofu produced from 100% genetically modified soy beans and milk from a cow that as a calf received vitamins, one of which was produced with the help of a genetically modified bacterium in a closed system,” Stephanie Töwe-Rimkeit of Greenpeace in Hamburg told Berlin-based Science magazine correspondent Kai Kupferschmidt.

So a genetic modification that can't possible express itself in any way that is harmful to humans or the environment should not be vilified and labeled? That applies to every single GMO in use today.

Welcome to the science side, Greenpeace. It's a shame it took half a century and a real product labeling effort to make that happen, but we welcome you just the same.

(1) It failed. They got rid of Dr. Anne Glover as a science advisor because she was fine with GMOs and are replacing her with a committee chosen to better represent the beliefs of the constituents in member nations, kind of like an IPCC for food, except with even more grey literature.
Science 2.0
More Articles All Articles
About