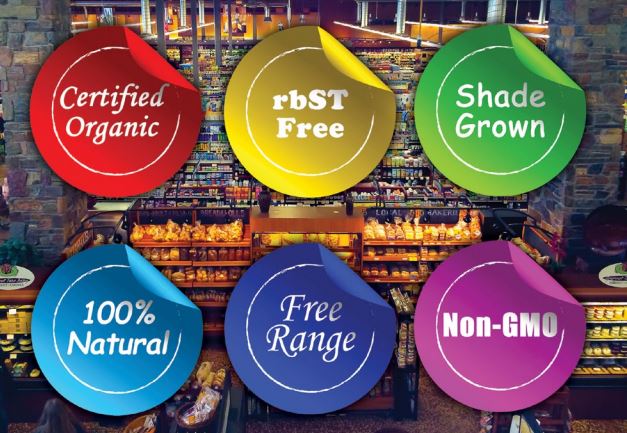 In the early days of food labeling and regulations, it was just about mandating honesty. If you go to buy mayonnaise, you shouldn't have to wonder if it is mayonnaise (1), and then labels became a marketing distinction.

Better ingredients meant a better product and that appealed to people who cared about higher quality or superior health for their families.

More recently, labels have become a way to promote self-identification with a world view - you could show you are more ethical and care more about your children and the developing world, and even the whole planet, if you buy a special label.

But at what point do these process labels - organic, kosher, natural, shade grown - do more harm for public understanding of food than good?

It's a valid question because we no longer live in 1862, when President Abraham Lincoln created the Department of Agriculture because 90 percent of America worked in agriculture. Today, only 2 percent of Americans work on a farm. When you grew your own food and someone said "you are what you eat", you knew what that meant.

What are you when Kroger determines what you eat?

In Science Left Behind, my co-author Dr. Alex Berezow recounted the story of a Seattle coffee shop where a well-meaning employee told him all the things he was not getting in their milk. To a scientist it was a meaningless nocebo gimmick but the bulk of the public won't have a PhD in biology. So if someone notes their stuff doesn't have rbST it is perfectly normal for the public to believe rbST must be bad. That is exactly the intent of anti-science lobbying groups like US Right To Know and SourceWatch when they do the work of their political clients to try and get GMO warning labels placed on food. Being "deniers for hire" helps get them donations but more worrisome is that the less educated public (that is not a criticism, science is complex) is scared into thinking that science can't be trusted.

Scientists don't have the benefit of shills - on the contrary, science is easy to undermine because it is the status quo. You are not 'Sticking it to The Man' if you stand up for science because most science is done by corporations and activists groups reply on, as Andras Baneth, Head of the Public Affairs Council's European office, notes at the American Council on Science and Health, outrage virtue signaling and the promise of empowerment for consumers if they make a donation or spam a member of Congress.

Process labels are like any other tool; they can be harmful or helpful depending on the intent of the person or company using them. But they are just a manufacturing process. If you want to believe kosher or organic food is more ethical, okay, but if you try to increase revenue for your clients by deceiving your customers into thinking it is going to lead to better health outcomes, as economist Chuck Benbrook and organic trade groups do, you deserve to be called out as a fraud.

(1) This is an issue: A vegan company wants to sell mayonnaise that defies the 1938 definition of mayonnaise, a law designed to prevent food fraud. Ironically, they want to overturn a law that would also prevent someone from making vegan food out of eggs and meat.