Hank Campbell
Attending the AAAS symposia on "Facing the Uncertain Future of International Science Journalism" I was stunned by something:   I am the most hated guy in every room I walk into.

Donald Kennedy,  President Emeritus of Stanford University and Editor-In-Chief of Science magazine, the journal of the American Association for the Advancement of Science (AAAS) whose annual conference I am attending, was saying something a lot of people there were thinking - the Internet has given readers a sense of entitlement that everything has to be free and in a 'you get what you pay for' world, what people were getting was lousy work.

Science media has gone from 'journals of verification' to 'journals of announcement'; by that he meant bloggers are just talking about the latest press releases rather than digging into substance.

I'm going to dispute that shortly, and you are probably already doing that mentally despite the fact that you are not capable of critical thought and simply rehash what you found in a press release.

First, I want to note obvious facts; science readership is up.  A lot.  Comscore surveys - and they are the authority in a 'you get what you pay for' world that old media likes, since they charge $50,000 per year - says the science readership is now 65 million people in the U.S. alone.  That's over 20% of America, even if we include children too young to read and the elderly without access to bloggers at all.  Yet science journalism jobs are down and budgets are being cut.

The refrain is that evil corporations do not care about anything other than the bottom line.  I hope that is all they care about.   Media exists for readers and not to be self-serving platforms to keep people employed.   The plain fact is journalists lost the trust of the public.

Pallab Ghosh of BBC News in London, who certainly knows old media, says he saw the cracks in the walls 7 or 8 years ago regarding climate change.   Climate scientists and journalists, who until that time had stayed fairly moderate in their zeal discussing and reporting on the issue, suddenly started responding to claims that Exxon was funding debunkers to go to conferences and talks and instill doubt, and adapted a mentality of 'we must get something done now' and the tone began to change. 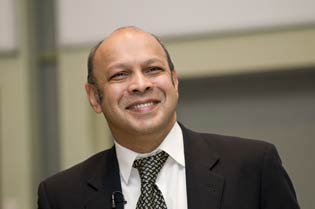 Today who is treated with the most skepticism by the general public?  Science journalists and climate scientists.  Even Big Pharmacy marketing departments who have found a golden egg in the vaccine industry have more trust among the public.

Ghosh went on to say something that I know resonated with everyone in the room.  Journalists, he said, "do not defend science.  Ask the awkward questions."

So Ghosh does not blame bloggers for the demise of science journalism, he seeks to get them back on the right path and once again become the "trusted guides" they once were regarding complex climate issues.

With him on the panel was Mariette DiChristina of "Scientific American", who nodded at all the right places while he spoke, yet does not seem to realize that her magazine is a culprit along with the rest of them.   "Scientific American" is not a trusted guide, it is more like a tour guide in Istanbul who takes you on a tour that will always end at his brother's carpet store.   And with that decrease in credibility has come a decrease in readership and jobs while a magazine like "The Scientist" still has high regard among scientists and casual science readers alike.

Kennedy had the most vitriol.  He did not dislike all blogs, he said, he read blogs on environmental policy and politics - in other words, he was willing to settle for opinion and lack of expertise on matters outside the science field - he just couldn't find a single one in science worth a darn.   Only large newspapers and high end journals deserve to survive.

Jim Cornell, head of the International Science Writers Association and with a lineage in science media too long to recount here, noted that the Himalayan "Glaciergate" was not broken by old media western journalists at all, it was by a young new media journalist in India who was aghast that claims that had been published as fact by the media worldwide were actually just speculation by a student.

Old Western media, at least when it comes to climate change, had lost the ability to "ask the awkward questions".  Bloggers have mostly taken that back for science.  Not in all cases.  I shared a beer with Bora Zivkovic, writer of Seed Media's Blog Around The Clock and community manager for PLoS One, and he mentioned that Scientific Blogging was 'unreliable' to him(1) because one casual blogger one time had written an article disputing the global warming CO2 dogma (2003 NASA Study: Soot fall in Arctic has 25 percent global warming impact), in that instance by saying soot was not getting enough respect because there was an irrational zeal about focusing on CO2 and a cottage industry in mitigating it.  In hindsight, the soot fellow was at least partially right and soot has gotten a lot more studies and credibility since, but we had a guy unafraid to 'ask the awkward questions' yet 1 article out of 50,000 made the site 'unreliable' to a science blogger who complains about that same treatment by old media, right after he complained that old media critics took the entire volume of the blogosphere and compared it only to the BBC and the NY Times so they used an unfair metric.

So keep on asking the awkward questions, even if you turn out to be wrong.   If you write something controversial and the left wing or the right wing bloggers don't like it, it makes no difference at all.  I didn't agree with the slant of the soot blogger but I defended his right to take a stand and make the data prove him wrong.   Climate science is not a sacred cow, nor is string theory or dark matter or the selfish gene or anything else.

We owe it to readers to try and slaughter sacred cows with awkward questions, because I have seen the future of science journalism - and they are us.

(1) We have to give him a bit of a break, Evil Empire competitor bent on science blogging universal domination or not.  While his english is flawless and he is a master communicator, he may have meant 'unreliable at one time' rather than consistently.  But he is a also a forthright, pull-no-punches guy and, sharing a beer and wonderful conversation or not, he may still mean it today.   How he found that one article out of 50,000 is a mystery.  I had a hard time finding what he was talking about hours later and I have read nearly every article on this site.
Science 2.0
More Articles All Articles
About