Hank Campbell
It is often the case that I get yelled at for being both too liberal and too conservative in the same week. It happens because the science under discussion violates the motivated reasoning of someone's political beliefs.  No conservative ever complains that the policy implication of a science issue is a conservative one, obviously, but you can bet left-wing people will, and vice-versa.

And getting yelled at by both sides is as it should be. If someone is consistently railing about one political party or cultural issue under the guise of 'science', and always finds any arguments otherwise "unconvincing", they are guilty of that ruse of faux sincere skepticism I talk about - namely, that they have no ability to be evidence-based but want to convince you they are so they seem more reasonable.

Writing in Scientific American, super-skeptic Michael Shermer notes how the data sometimes changes his political libertarianism - he had been against gun control, for example, because of the freedom issue, but says statistics overwhelm that now.  Well, maybe, but one should be wary of gun control advocacy statistics too - they are just as guilty as gun proponents of cherry picking and data mining of studies to suit ideological convictions. California has seen its gun murder rate plummet while gun ownership has gone way up (as has the entire US). Statistics show banning guns would primarily impact suicides, not shooting sprees, just as many shooting sprees happen in countries where guns are banned.  See how easy that is?

Either way, the fact that statistics changed your mind is a sign you were never letting political positions overwhelm reason anyway. That is not an indictment of libertarianism, it is an endorsement of sanity.

He also says the data changed his opinion on global warming, which he had been skeptical of because of the "secular millenarianism" of some climate scientists and environmentalists, who are always forecasting doomsday and collecting checks doing so.

Agreed, they can be pretty tedious - siding with them requires not recognizing that environmentalists would have said we were dead 10,000 years ago also. But that also has nothing to do with data triumphing over libertarianism, it has everything to do with reason and science progress. In the early days of climate models, they really were terrible. Like a student who gets the right answer the wrong way, it was doing more harm than good for science to let crappy models go unchallenged.  Climate scientists of today have been forced to really learn both statistics and modeling - it has been trial by fire - and we are all the better for it, because the head-fake of bad models is (mostly) unavailable to denialists now.

He gets discouraged because some libertarians are just never going to accept data. While gun ownership is too fuzzy sociologically to have a right and wrong answer, climate change is slowly winning because most people are not entrenched in their science based on their politics, any more than he is. Had he gone to a conference populated by Greenpeace or members of the Union of Concerned Scientists rather than a libertarian event, he would have been just as demoralized by their inability to be swayed from their politics-first mentality, but that is because the data set is people at a political conference, who are already quite entrenched in their political beliefs.

So it isn't that libertarianism is wrong for science, it is actually just the opposite; science is inherently a libertarian activity, it requires intellectual freedom. Both corporations and the government, the only two sources of science funding in the modern world, recognize that a certain amount of freedom is needed, even while their own self-interests motivate them to manipulate what gets funded on the larger scale. Neither liberals or conservatives can help themselves when it comes to banning science projects their political beliefs are against.

So don't give up on libertarianism because of a few people hiding under that umbrella, Michael, any more than you gave up on climate science because of some people in that field. Yes, they have just as many goofy people as liberals and conservatives (though less than progressives), to wit: 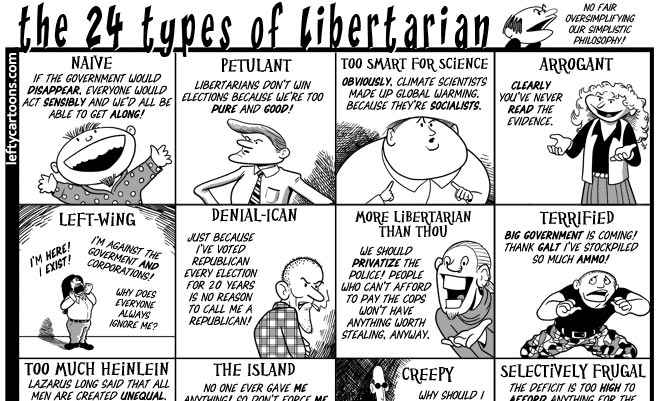 Libertarianism isn't perfect and I am not a libertarian, except when it comes to science, but in an increasingly regulated world, more people are recognizing that independence and free-thinking are not happening in political crowds that claim to be liberal or conservative; they both have social authoritarian agendas and simply want to take your money to promote them.
Science 2.0
More Articles All Articles
About