Always thought women were the stronger sex? Okay, I admit it, me too.

But I am inclined to be a little skeptical when someone pimping their book cites ancillary evidence rather than studies so even if the logic is good I tend to maintain a healthy disbelief.

Ryuichi Kaneko and Dr. Kunio Kitamura, two of the co-authors of "Sex no Subete ga Wakaru Hon (Everything You Need to Know About Sex)" write in the Mainichi Daily News:


When an orgasm has been achieved through sex, you can measure theta waves. These are also said to cause the "running high" feeling of euphoria experienced sometimes by marathon runners. If theta waves are taken as a criterion, the entire brain emits theta waves when women reach an orgasm that are close to 10 times stronger than when men climax. So, if theta waves are an indication of an orgasm's strength, then women experience an orgasm that is physically impossible for men to go through. Putting it a little crudely, if the intensity of a woman's orgasm was played through a man's brain, there's a danger that the shock to his system would kill him. That risk makes it impossible to experiment on a man at the moment. And men can never become women.

That's right, people - the theta waves for women are 10X what they are for men.  This explains why some women have had actual vaginal explosions when dating scientists - there is only so much pleasure even women can sustain.

It's accepted that delta and theta activity in the autonomic nervous system will increase during pleasurable events but because it's sex, and sex is difficult to map subjectively, I don't want to just assume cause and effect.  I decided to go off the map and read up on Kundalini, which Hindus say is the coiled up energy at the base of the spine in the root Chakra.

Gopi Krishna says this Kundalini is terrific stuff and accounts for almost everything. 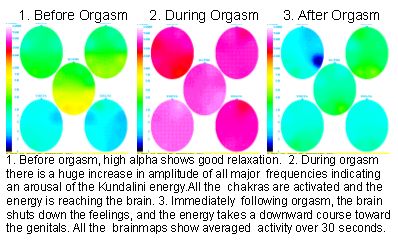 In Kundalini And Sex they write:


According to a principle called reciprocal innervation, an extremely high activation of the frontal hypothalamus and thus of the parasympathetic system, will create an overflow of energy activating the posterior hypothalamus which stimulates the sympathetic nervous system. This will make the energy rise to higher centers and this process is accompanied by very fast activity in the EEG (beta and gamma wave frequencies up to at least 42Hz).

That's right.  You have sex at DC.

It fell on, naturally, the Japanese to introduce a whole slew of products that use electricity to impact these waves in a direct fashion.  The links are not safe for work so I don't include any them here.  I even found an article discussing theta waves by Robert Anton Wilson, famous for co-authoring The Illuminatus Trilogy.

What I could not find was a study showing any kind of direct correlation; namely, something showing anything beyond theta wave increase being a by-product.

If one is out there, I am sure one of the experts at Science 2.0 will let me know.  So at least given current studies it's scientifically unproven that a female orgasm would kill men.  Yes, men are wussies in lots of ways, but we can handle sex.

Because every woman wants a man writing this article about her orgasms.