Home > Neuroscience > The Science of Motherhood

Kimberly Crandell
Autism is an elusive disorder in all respects. Symptoms and behaviors vary greatly between individuals, and even within individuals day-to-day. Theories regarding causes and cures for autism ebb and flow throughout the media, sweeping us up daily in combative swirling tides of confusion and conviction. And even the very definition of the disorder itself is often a moving target, constantly being revisited, revised and reinterpreted.

In general terms, autism is defined as developmental disability that typically appears during the first two years of life and is the result of a neurological disorder that affects the functioning of the brain - impacting development in the areas of social interaction, and communication skills.  The clinical definition of autism is more specific, and resides with the American Psychiatric Association. Its Diagnostic and Statistical Manual of Mental Disorders (DSM) provides the diagnostic criteria for all psychiatric diagnoses, including autism.

In the current version of the manual (DSM-IV), autism is one of five disorders that falls under the umbrella of Pervasive Developmental Disorders (PDD), a category of neurological disorders characterized by “severe and pervasive impairment in several areas of development.”

Autism (or Autistic Disorder), and two closely related diagnoses, Asperger’s Disorder and PDD-NOS (Pervasive Developmental Disorder – Not Otherwise Specified), make up what is often referred to as Autism Spectrum Disorders (ASD).  What differentiates the three disorders is the presence and severity of specific behavior and communication impairments.

For the diagnosis of Autistic Disorder, the DSM-IV outlines the following criteria: 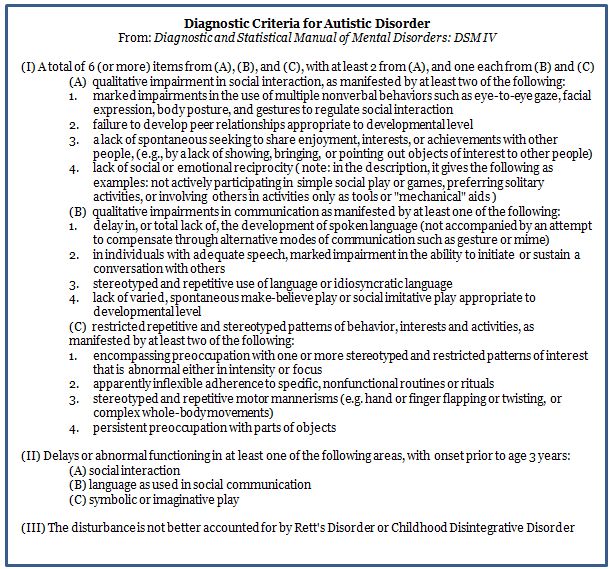 Because the characteristics of the diagnosis are so widespread, two children diagnosed with Autistic Disorder could actually vary significantly in their symptoms and behaviors.  This makes the treatment of autism very individualized, as each person with autism tends to have their own unique behavioral, social, and communicative challenges.

Asperger's Disorder was first described in the 1940s by Viennese pediatrician Hans Asperger who observed autistic-like behaviors and difficulties with social and communication skills in boys who had normal intelligence and language development. Many professionals felt Asperger's Disorder was simply a milder form of autism and used the term "high-functioning autism" to describe these individuals.

What distinguishes Asperger's Disorder from Autism Disorder is the severity of the symptoms and the absence of language delays. Children with Asperger's Disorder may be only mildly affected and frequently have good language and cognitive skills.  However, they are often socially awkward - not understanding conventional social rules, and simply not knowing how to interact socially with others.  They may have limited eye contact, seem to be unengaged in a conversation, and not understand the use of gestures.

Individuals with Asperger's also often have a very fixed, almost obsessive interest in a particular subject.  They may like to collect certain categories of things, such as rocks or bottle caps. They may be proficient in knowing categories of information, such as baseball statistics or Latin names of flowers. And while they may have good rote memory skills, they have frequently have difficulty with abstract concepts. PDD-NOS is a diagnosis by exclusion.  PDD-NOS stands for pervasive developmental disorder, not otherwise specified. A child diagnosed with PDD-NOS exhibits some symptoms of autism, but they are either not severe enough, or they do not have enough symptoms, to be diagnosed as one of the other PDD diagnoses.  A child diagnosed with PDD-NOS is often described as having "a little bit of this, and a little bit of that" from the list of Autistic and Asperger symptoms and characteristics - but their pattern of symptoms is not better described by one of the other disorders beneath the PDD umbrella.

In February 2010, the American Psychiatric Association revealed its proposed revisions for the DSM's fifth edition, due in 2013.  One of the most controversial changes planned for DSM-5 is its proposed changes to the category of Autistic Disorder.

The new name for the category would be Autism Spectrum Disorder, and would encompass all of the previously separately diagnosed disorders (Autistic Disorder, Asperger's Disorder, Childhood Disintegrative Disorder, and PDD-NOS) under one.  It is being recommended that Rett's Disorder not be included in DSM-5 at all.  The rationale for its exclusion is that Rett's Disorder patients often have autistic symptoms for only a brief period during early childhood, so inclusion in the autism spectrum is not appropriate.  Childhood Disintegrative Disorder (CDD) is a rare condition, with most recent reports indicating a prevalence of 2/100,000.  As a result, data on CDD is extremely limited, and there are still questions regarding the validity of the condition as separate and distinct from autism with a regressive course. (2)

The APA provides the following rationale for consolidation of the category:

Differentiation of autism spectrum disorder from typical development and other "nonspectrum" disorders is done reliably and with validity; while distinctions among disorders have been found to be  inconsistent over time, variable across sites and often associated with severity, language level or intelligence rather than features of the disorder.

Because autism is defined by a common set of behaviors, it is best represented as a single diagnostic category that is adapted to the individual’s clinical presentation by inclusion of clinical specifiers (e.g., severity, verbal abilities and others) and associated features (e.g.,  known genetic disorders, epilepsy, intellectual disability and others.) A single spectrum  disorder is a better reflection of the state of knowledge about pathology and clinical  presentation; previously, the criteria were equivalent to trying to “cleave meatloaf at the joints”.

The new criteria require that the symptoms begin in early childhood and that deficits be  measured in two areas: social interaction and communication, and the presence of repetitive behaviors and fixated interests and behaviors. 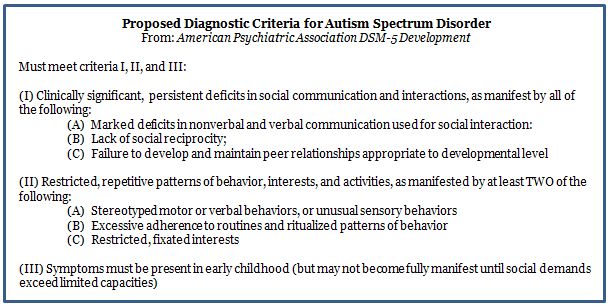 The controversy surrounding the change is being raised by individuals with Asperger's syndrome, many of whom are resisting the inclusion of Asperger's in the same diagnostic group as autism and pervasive developmental disorders.

The concern is that many believe that Asperger's has been destigmatized, yet autism has not.  A diagnosis of Asperger's is considered by some to be more acceptable, and viewed as less debilitating than autism.  So individuals with Asperger's are reluctant to lose that distinction with the new category consolidation.

But the DSM does not make diagnoses based on the stigma of one group over another, said Catherine Lord, director of the University of Michigan Autism and Communication Disorders Center, who is on the American Psychiatric Association committee looking at autism.

"Many people prefer to use the term Asperger's, and we're not saying that you can't describe yourself that way," she said. But the research shows "no scientific evidence that there are separate syndromes."

For a limited time, the APA will allow the public to provide feedback on the proposed changes.  The new criteria will be available for public comment at DSM5.org until April 20. They will reviewed and refined over the next two years, during which time the American Psychiatric Association will conduct field trials to test some of the proposed revisions in real-world clinical settings.

Monday: "Social Skills Training"
If you're interested in reading additional articles on autism, ScientificBlogging's Autism Awareness page provides a listing of all the articles on our site that touch on the subject.