Kimberly Crandell
I have a curious mind and like to find out how and why things work. Unlike my husband and my two boys, I don’t necessarily take things apart to uncover how they operate (what is it with the Y chromosome and the inherent need to do this?) – instead, I’m more of a look-it-up-and-research-it type of girl. Thank goodness for Google.

At the same time, there are some of life’s mysteries that I am happy to accept. I don’t really understand how volume control works. I mean, I know it has something to do with sound waves and amplitude – but all I really know is when I turn the knob up, I can suddenly hear my movie again over the ruckus of the kids. Mystery of how to hear the ending of “Stardust” while the boys play destruction derby in the other room – solved. **

Until this morning, I was also happy to add baking powder and yeast to recipes simply because they called for it, and not wonder about how these leavening agents help to make all of my baked goods light and fluffy. But in my search for a good recipe for Irish Soda Bread (in celebration of the upcoming St. Patrick’s Day), I suddenly became curious about the history of the bread, and the importance of the two main ingredients I found in every single recipe I uncovered: baking soda and buttermilk.

Historically, traditional Irish Soda Bread contains only four ingredients: flour, salt, buttermilk and soda. Soda is the key ingredient that led to the birth of this particular type of bread (hence the name) because until its introduction in the 1840’s, it was difficult to create a loaf bread that would “rise” with the wheat found in Ireland. 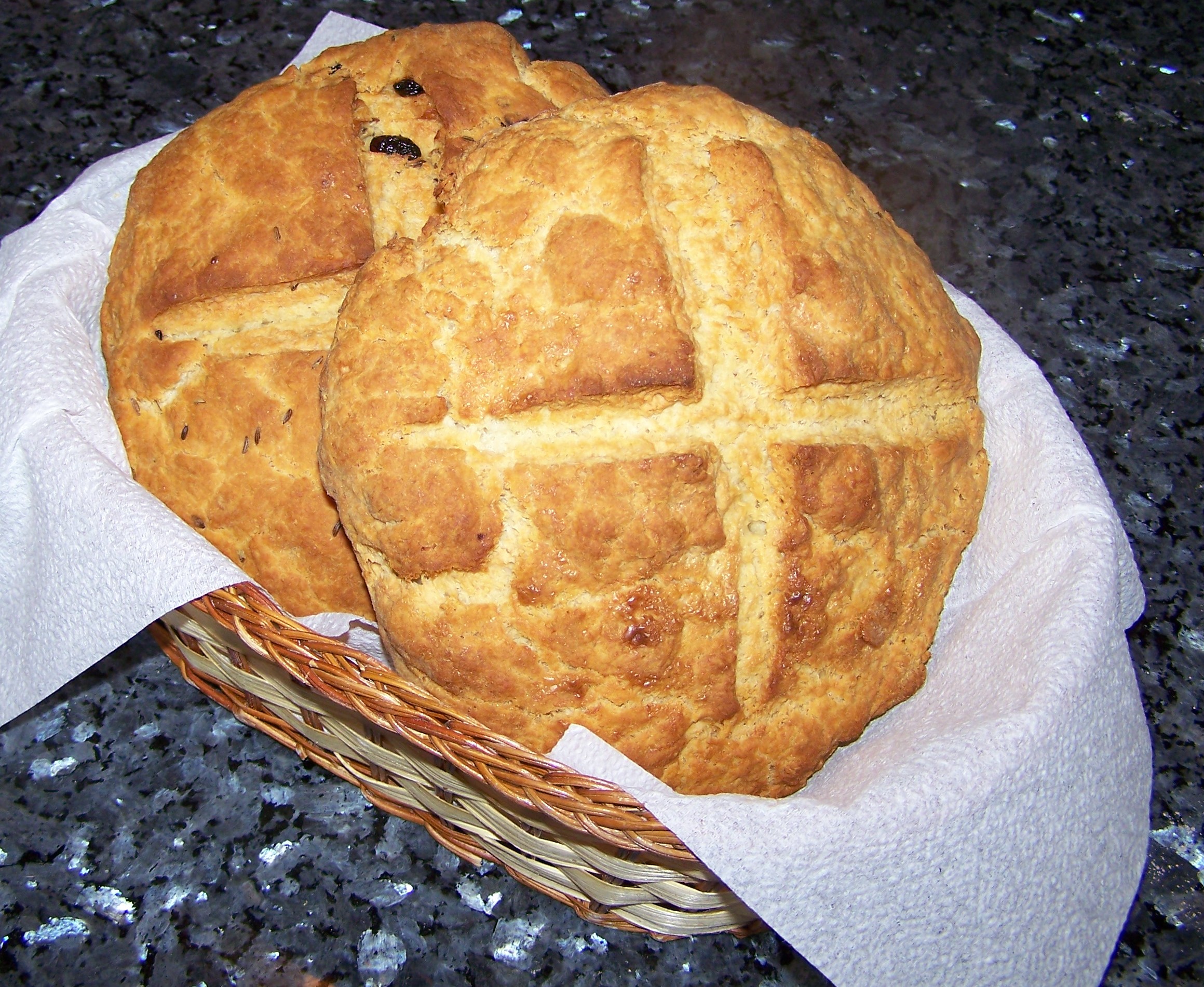 The climate of Ireland hinders the growth of “hard” wheat, the type that creates flour that rises easily with the assistance of yeast. Hard wheat flour has a high protein content that has strong gluten-forming properties. Gluten is important, because as you knead traditional yeast dough, the gluten becomes more and more stretchy and its gum-like consistency fills with thousands of gas bubbles as the dough begins to rise.

How does the yeast make the dough rise? The yeast is actually a live single-celled organism, a variety of fungi called Saccharomyces cerivisiae. Like many fungi types, yeasts for bread dough respond to warm water which brings the little cells to life. Then when exposed to sugars in bread and in flour, it begins to eat, digesting portions of these sugars. As Saccharomyces cerivisiae is feasting, it begins to release gas bubbles of carbon dioxide, and small amounts of ethanol alcohol. These bubbles, trapped in the bread dough, cause the rising action we are familiar with.

Below is a quick video that allows you to witness 12 hours of bread rising in only 26 seconds:


This eating process goes on for a short period of time only. Eventually the yeast will die after a few hours, especially if the dough is allowed to grow cold or exposed to too much air. But the process will continue for a short time even after the bread is placed in the oven. The heat from the oven makes the remaining yeast cells go into overdrive, madly munching away at the sugars and expelling carbon dioxide prior to expiring from the oven heat. This is why bread continues to rise during its early cooking stages, and then may deflate slightly as cooking continues.

So why doesn’t this approach work with the wheat grown in Ireland? The Green Isle is not exactly known for its arid climate and plentiful sunshine. So the only kind of wheat that will grow there is classified as “soft” wheat – a term that refers to the relative hardness of the wheat kernels. In the damp green fields of Ireland, only soft wheat can be produced – wheat that has a high starch content, but is low in protein and therefore low in gluten strength. Without a high gluten content, bread from made from this “soft flour” cannot achieve the loftiness, airiness, and structure of a yeast bread made with “hard flour.” 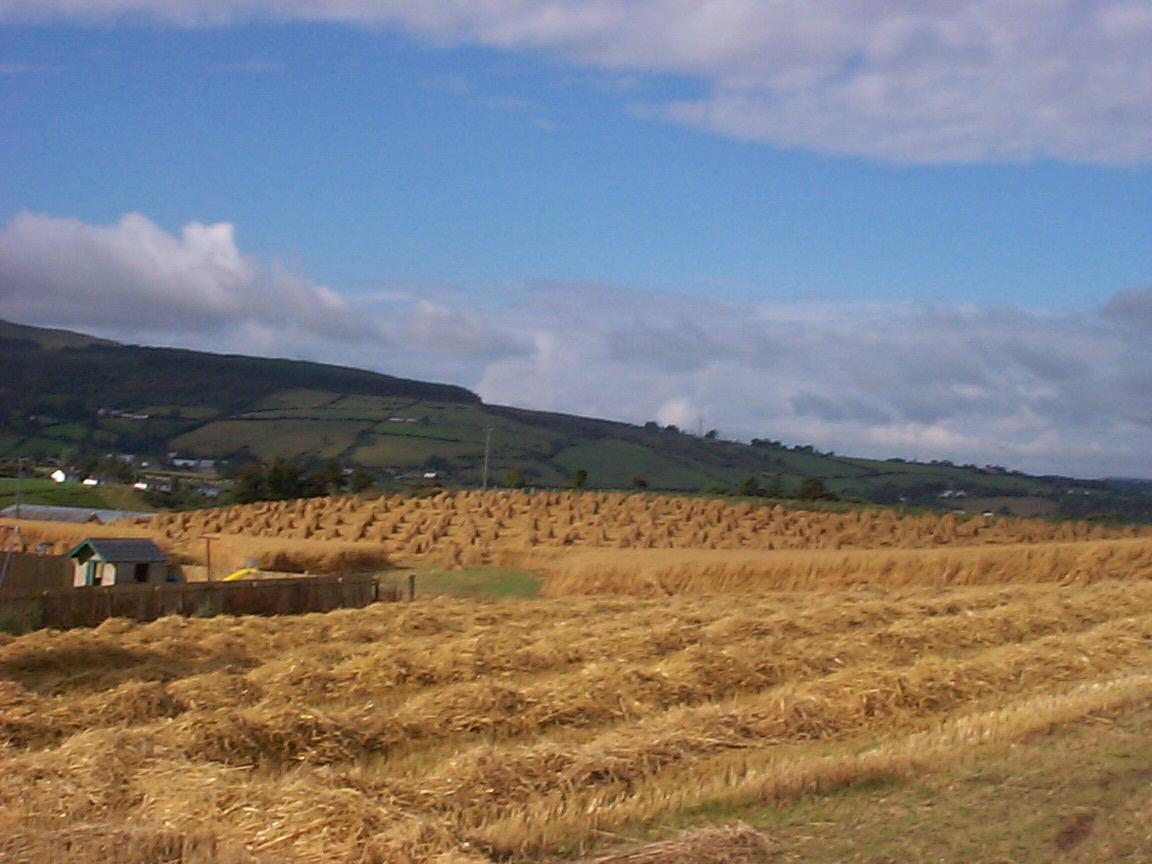 However, with the introduction of bicarbonate of soda in the 1840’s, there was suddenly another option that could replace yeast as the leavening agent in bread. Bicarbonate of soda, or “baking soda,” worked quickly, relying on chemical reactions between acidic and alkaline compounds to produce the carbon dioxide necessary to inflate dough. Specifically in the case of Irish Soda Bread, it is the added buttermilk that behaves as the acidic compound that reacts with the baking soda, which produces the carbon dioxide bubbles, and causes the bread to rise.

In the journal Chemistry and Chemical Analysis by the Ireland Commissioners of National Education published in 1861 in Dublin, the following appeared on page 319:

“Although it is very desirable that bread should be light, it is not always possible to obtain yeast: - hence, what is called "soda bread" has been of late, very much used. Its lightness is due to carbonic acid, disengaged from bicarbonate of soda. The latter is mixed with the flour, and is decomposed by an acid -- sometimes, by that contained in sour milk, but more conveniently by dilute hydrochloric acid. This kind of bread, has not the advantage of its constituents being even slightly broken up, by incipient fermentation; nevertheless, it is said to have properties, which render it at least as wholesome as that which is made with yeast.”

The popularity of soda bread spread quickly. Bicarbonate of soda was relati vely inexpensive - and most people had cows, and therefore buttermilk; and were growing wheat, so had access to flour. And suddenly even people that didn’t have an oven (and most didn’t at that time) could make soda bread. They cooked the bread in what is called a bastible – a big cast-iron pot with a lid on it that was put right into the coals of a fire.

Again, traditional Irish Soda Bread contains only the most minimum of ingredients: flour, salt, buttermilk and baking soda. However, what many people create this time of year and snack on is more of a cake, because it includes sugar and often times some type of dried fruit like raisins or currants.

From the website of the “Society for the Preservation of Irish Soda Bread” (yes, there is such a thing!) ~

“This was a daily bread that didn't keep long and had to be baked every few days. It was not a festive "cake" and did not contain whisky, candied fruit, caraway seeds, raisins (add raisins and it becomes "spotted dog" not to be confused with the pudding made with suet of the same name), or any other ingredient. There are recipes for those types of cakes but they are not the traditional soda bread eaten by the Irish daily since the mid 19th century.”

So tomorrow, while sipping on your green beer (also not an actual tradition from Ireland, as I understand it), eating your corned beef and cabbage, and enjoying a thick slice of Irish Soda Bread; be aware that if it contains sugar, fruit, seeds, whiskey, or anything tasty for that matter – it’s probably not the traditional fare. But in case you are a compare-and-contrast type of person, I’ve provided recipes for both types - including the recipe that I threw in the oven myself this morning which is definitely not traditional, but very tasty. Courtesy of the Society for the Preservation of Irish Soda Bread

Preheat oven to 425 degrees F. Lightly grease and flour a cake pan.
In a large bowl combine all the dry ingredients.
Add the buttermilk to form a sticky dough. Place on a floured surface and lightly knead (too much allows the gas to escape)
Shape into a round flat shap in a round cake pan and cut a cross in the top of the dough.
Cover the pan with another pan and back for 30 minutes (this simulates the bastible pot).
Remove cover and bake for an additional 15 minutes. 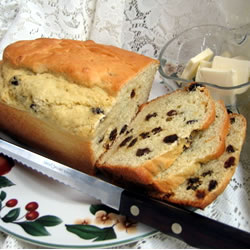 Preheat oven to 325 degrees F. Grease a 9x5 inch loaf pan.
Combine flour, baking powder, sugar, salt and baking soda. Blend egg and buttermilk together, and add all at once to the flour mixture. Mix just until moistened. Stir in melted butter. Pour into prepared pan.
Bake for 65-70 minutes, or until a toothpick inserted in the bread comes out clean. Cool on a wire rack. Wrap in foil for several hours or overnight for best flavor.

** If you haven’t seen or rented “Stardust”, I highly recommend it. It’s a great fanciful escape movie with adventure, romance, and a lot of humor. If you’re a fan of movies like “The Princess Bride”, you’ll like this one. It’s based on a graphic novel written by Neil Gaiman – another one of my favorites.
The Science of Motherhood
More Articles All Articles
About