Kimberly Crandell
Spirit (Mars Exporation Rover-A, or MER-A), is the first of two rovers which are part of NASA's Mars Exploration Rover Mission. Today marks the 5-year anniversary of Spirit's successful landing on Mars.  Of the hundreds of engineers and scientists who cheered at NASA's Jet Propulsion Laboratory in Pasadena, CA when Spirit landed safely on January 4th, 2004, - and 21 days later when its twin Opportunity (MER-B) followed suit - none predicted the team would still be operating both rovers in 2009.

The rovers were designed to perform extensive geological analysis of Martian rocks and planetary surface features, and over the past 5 years have made important discoveries about wet and violent environments on ancient Mars. They also have returned a quarter-million images, driven more than 21 kilometers (13 miles), climbed a mountain, descended into craters, struggled with sand traps and aging hardware, survived dust storms, and relayed more than 36 gigabytes of data via NASA's Mars Odyssey orbiter. To date, the rovers remain operational for new campaigns the team has planned for them.

"The American taxpayer was told three months for each rover was the prime mission plan," said Ed Weiler, associate administrator for NASA's Science Mission Directorate at NASA Headquarters in Washington. "The twins have worked almost 20 times that long. That's an extraordinary return of investment in these challenging budgetary times."

The rovers are incredibly resilient considering the extreme environment the hardware experiences every day.  Occasional cleaning of dust from the rovers' solar panels by Martian wind has provided unanticipated aid to the vehicles' longevity. However, it is unreliable aid. Spirit has not had a good cleaning for more than 18 months. Dust-coated solar panels barely provided enough power for Spirit to survive its third southern-hemisphere winter, which ended in December. 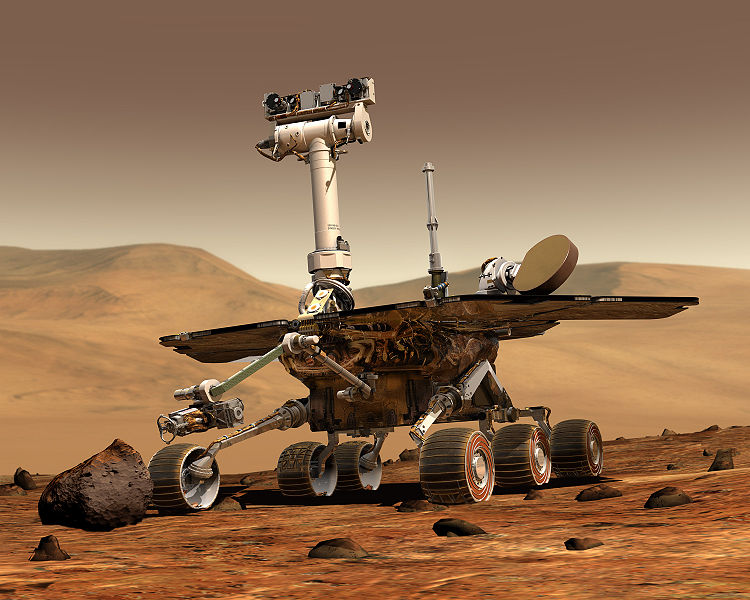 In November 2008, a dust storm on Mars cut into the amount of sunlight reaching the solar array on Spirit to such a degree that the rover's energy output dropped to a critical level.  The charge level of Spirit's batteries dropped so low, it risked triggering an automated "protective mode" where the rover would no longer be able to be controlled by sequences sent from the ground.  Spirit's solar array produced only 89 watt hours of energy during the rover's 1,725th Martian day, which ended on Nov. 9. This was the lowest output by either Spirit or Opportunity in their nearly five years on Mars; and much less energy than rovers require to function each day.

Controllers cheered on November 13th when they finally received communication from Spirit via the Mars Odyssey.  The dust storm cleared, but a coating of dust on Spirit's solar panels remained - reducing the rover's ability to generate electricity even on clear days.  Only 30 percent of the light hitting the solar panels was able to get through the dust to the photovoltaic cells, down from 33 percent before the storm.

"This last winter was a squeaker for Spirit," said John Callas, JPL project manager for Spirit and Opportunity. "We just made it through."

With Spirit's energy rising for spring and summer, the team plans to drive the rover to a pair of destinations about 183 meters (200 yards) south of the site where Spirit spent most of 2008. One is a mound that might yield support for an interpretation that a plateau Spirit has studied since 2006, called Home Plate, is a remnant of a once more-extensive sheet of explosive volcanic material. The other destination is a house-size pit called Goddard.

"Goddard doesn't look like an impact crater," said Steve Squyres of Cornell University.   Squyres is principal investigator for the rover science instruments. "We suspect it might be a volcanic
explosion crater, and that's something we haven't seen before."

Spirit has also provided some never-before-seen images.  Below is the first color image taken by the panoramic camera on Spirit.  It was the highest resolution image taken on the surface of another planet.  The picture shown originally had a full size of 4,000 by 3,000 pixels. 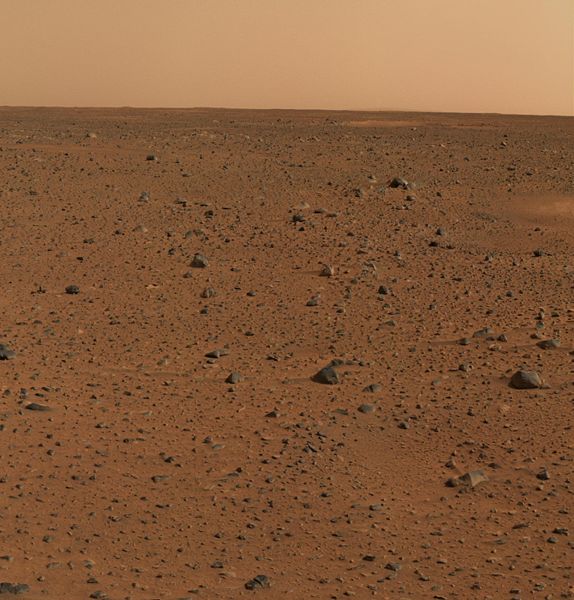 Spirit also took the only photo of Earth from the surface of another planet in early March 2004: 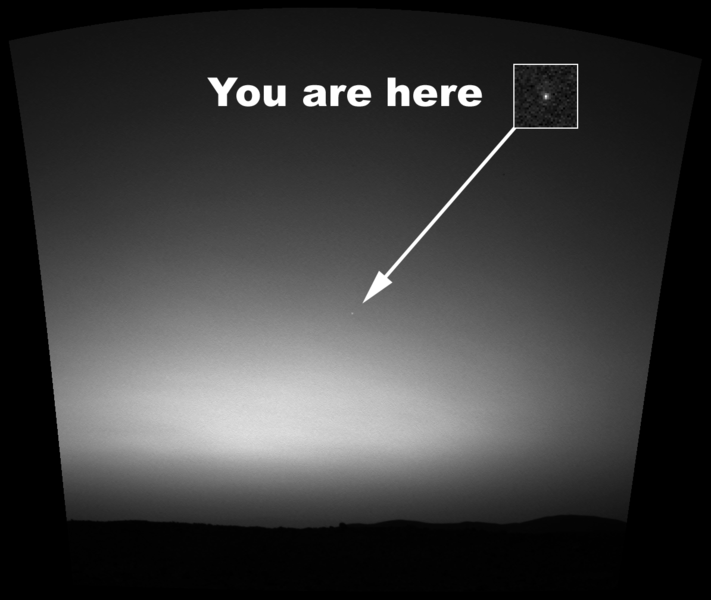 Puts things in perspective, doesn't it?

Although both rovers have passed their original mission time of 90 sols (Martian solar days*) many times over, the extended time on the surface and therefore additional stress on components has resulted in some issues developing.

On sol 779, the right front wheel of Spirit ceased working after having covered 4.2 mi (7 km) on Mars. Engineers began driving the rover backwards, dragging the dead wheel.  Ironically, although this has resulted in changes to driving techniques, the dragging effect has also had a positive effect in the fact that the wheel dragging has partially cleared soil away on the surface as the rover travels and allows for imaging areas that would normally be covered in soil.

The grinding surface of the Rock Abrasion Tool has also worn down, and the device can only be used to brush targets.  But all of the other science instruments and engineering cameras continue to function. The Mössbauer spectrometer takes much longer to produce results than it did earlier in the mission because of the decay of its radioactive source.

"The journeys have been motivated by science, but have led to something else important. This has turned into humanity's first overland expedition on another planet. When people look back on this period of Mars exploration decades from now, Spirit and Opportunity may be considered most significant not for the science they accomplished, but for the first time we truly went exploring across the surface of Mars."

For more on the Mars Exploration Rover Mission, check out the official JPL site at: http://marsrovers.nasa.gov/overview/