Camille M.
Carlisle
General relativity’s wrong.  That’s a thought many of us don’t like to consider.  But what if there existed a nagging unresolved problem — say, for example, the eclipsing binary star DI Herculis — that worried at our certainty like a stray lump of mud worries Sherlock Holmes?

In fact, that's been the case for several decades . . . until now.

Our case begins over 30 years ago, when astronomer Edward Guinan (Villanova University) went to Iran to help set up an astronomy program and direct construction of the nation’s first high-powered telescope.  Once the telescope was up and running, he took advantage of Iran’s pristine skies to do some research.  He finished his project in 2 months.

“I ran out of things to do,” says Guinan, a man renown for having more projects than your average school science fair.  He started nosing through old publications for ideas, and in his search he came across a 1959 paper by a Danish astronomer about the eclipsing binary system DI Herculis, a pair of main-sequence B stars (i.e. stars that fuse hydrogen in their cores, with surface temperatures about 15,000 K).  The paper suggested DI Her was a good candidate for testing general relativity, and Guinan decided to give it a go.

“I expected it to be a nice test, but it didn’t work out that way,” he says.  To his surprise, the stars’ orbits did not match those predicted by GR.  At all. 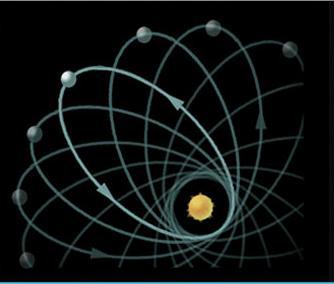 According to GR, the orbit of one celestial body around another — a planet around its sun, for example — doesn't end exactly where it begins.  Instead, the orbit’s oval moves around the star in a spiral pattern, rather like those rosettes you can draw with spiral stencil kits.  This movement means that the planet's closest approach to the star is never quite at the same place.  Such precession results from the bodies’ gravitational effects on each other.  We see this precession in our own Solar System:  Mercury's orbital precession helped bolster Einstein's case for general relativity, because GR predicted perfectly the precession Newtonian mechanics couldn’t.  It did so by allowing for distortions in the star’s shape, which determine the gravitational effects the star exerts on other objects by changing the way the star stretches spacetime.

GR has held up pretty well over the years, which is what made DI Her so troubling:  the stars' orbits precess at a rate four times slower than GR predicts.  Was there another body in the system, affecting the stars’ orbits, Guinan wondered, or was GR actually wrong?

“We spent a year writing that paper, because we knew it was going to get attention,” says Guinan.  “You don’t think that GR is wrong, but you have a one in a million chance, and you can’t stop, because what if it were?”

Intriguing as it was, DI Her went to Guinan’s back burner for awhile.  He and colleagues checked the eclipse timing every year, and occasionally he brought it up in his conference presentations, but that was all.  It did give some researchers with alternatives to GR a chance to test their theories, such as John Moffat (University of Toronto) and his nonsymmetric gravitational theory, and it made for at least one good feature story in the 1990s.  But DI Her really didn’t pop up on astronomy’s radar again until this year, when MIT’s Simon Albrecht and his team managed to solve the mystery.

Using the Sophie spectrograph on the 1.93-meter telescope of the Observatoire de Haute-Provence in France, Albrecht and company observed the light coming from DI Her for any
anomalies.  They found that the spectral lines in the stars’ atmospheres were distorted by more than the red- and blueshifts caused when the stars move in space along our line of sight.  Accounting for stellar rotation and orbital motion, among other things, they calculated parameters for the stars that fit the data.  What they found was that the data best fit a model in which the stars are almost lying on their sides:  one star’s axis tilts 72 degrees from up-down, the other 84 degrees but in the opposite direction.  In this orientation, they basically roll around each other like marbles, instead of like tops. 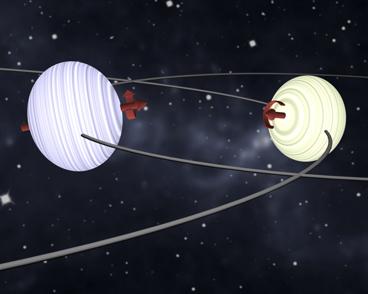 Why does this solve the problem?  Because the stars are a little pudgy around the middle, Albrecht explains.  Rotation causes stars to bulge along the equator.  If this bulge is in the orbital plane (i.e. if the stars’ axes are sticking straight up-down, perpendicular to the plane in which the stars circle each other), it will augment the forward motion of the orbit caused by GR.  On the other hand, Albrecht continues, if the star’s spin axis is strongly tilted relative to the orbital plane, the gravitational force from the equatorial bulge makes the orbit precess backwards.  The sum of the forward motion caused by GR and the backward, or retrograde, motion caused by the sideways bulges produces the slower precession rate.

Mystery solved . . . kind of.  Guinan thinks the study looks “solid” but says “it isn’t over.”

“It’s strange that the axes are so far flipped over,” he explains.  Binary stars, especially ones of similar masses like DI Her, are thought to form together in giant molecular clouds.  This process should produce stars that are rotating the same way, not skewed like DI Her.  Guinan proposes some kind of collision, or near-collision, occurred in the last 100,000 to 1  million years, or that one star was caught by the other.  Still, “it had to have been a pretty nasty collision,” he says, and so far they haven’t found any stars in the region that could have caused it.

There’s also the question of whether the stars are always tilted this way.  Guinan considered tilted axes as a solution when he and Frank Maloney (also of Villanova University) first published their DI Her data in 1985, but they found no evidence of skewing to within 30 degrees of the perpendicular.  That fact, coupled with disparate measurements of the stars’ rotational velocities over the years, may indicate there’s something else up with the system, Guinan says.

Still, Albrecht and his team’s analysis appears to have finally closed one of the longest outstanding cases against GR.  The team’s paper appears in the 17 September issue of Nature.