The Daytime Astronomer at Career Day

8 classrooms in 5 hours. 30 minutes per class. Grade levels ranging from kindergarten to 6th grade. Unscripted, 1 index card of talking points. When I compare 'Career Day' at my kids' elementary school with my Ph.D. defense, that dissertation committee seems the easier audience-- fewer questions outside of my field.

This blog serves me well for my K12 talks. Many of the concepts I work with here-- what it's like to be a working astronomer, what motivates me, what neat science stuff have I come across-- are perfect for talking to school kids. I used much of material here when I talked there.

The recent Star Trek movie raised a new set of conundrums about time travel and alternative realities. As an astrophysicist, I am clearly most able to tackle these issues.

Basically, time travel theories fall into two classes. C. J. Ander posits 6 Theories of Time Travel, but Anders is more of a trek anthropologist. His work categorizes how time travel affects people and things, not entire universes. From a physics point of view, these can be simplified to two different energy perspectives. 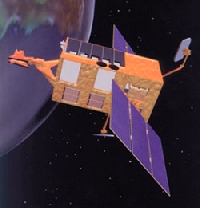 I've just wrapped up my time with another mission!  Can you match each satellite picture with its name?

While I was napping, Jupiter became a 2nd sun. Although it was observed in January by STEREO, we forgot to tell people. Or perhaps we were hiding the truth. Also, it was so well covered on YouTube that we didn't think we had to bother with a press release. So you wanna be an astrophysicist? Try this route!

The Daytime Astronomer, Tues&Fri here, via RSS feed, and twitter @skyday
Two days ago, I woke up blind. Couldn't open my eyes-- lids were fused shut. For that early morning hour, I had to question just what I would do as a blind astronomer.

I'd had blurry vision the night before, but this was still unexpected. Pragmatically, I found my way to a sink to try and flush out my eyes, get some vision back. To avoid false suspense-- I was able to see (mostly) in fairly short order. And I can safely assure you there is a huge emotional difference between 'no sight' and 'can see slightly'.