Danna Staaf
In an obituary for biologist Robert Clarke published recently in Marine Mammal Science, I read a rather curious passage about this scientist's observations of Humboldt squid:

During these voyages [off Peru and Ecuador] he noticed that the population of Humboldt giant squid,Dosidicus gigas, had been severely depleted owing to its excessive exploitation during the 1990s by factory ships from South Korea and Japan. Prey depletion may have forced the sperm whale of the Southeast Paciﬁc to migrate to other seas to feed. This seemed to be corroborated in a paper by Jaquet et al. (2003), who reported sperm whales photo-identiﬁed around the Galapagos Islands, later identiﬁed in the Gulf of California, and suggested this as possible evidence for the migration of sperm whales due to scarcity of prey in the Southeast Paciﬁc.

Were Humboldt squid truly overfished in the 1990s? Here are the data from the FAO* on Humboldt squid landings in Peru, hastily graphed in Google Docs (which turned out to be way less annoying than LibreOffice**, so today Google takes the win for free Excel knockoff): 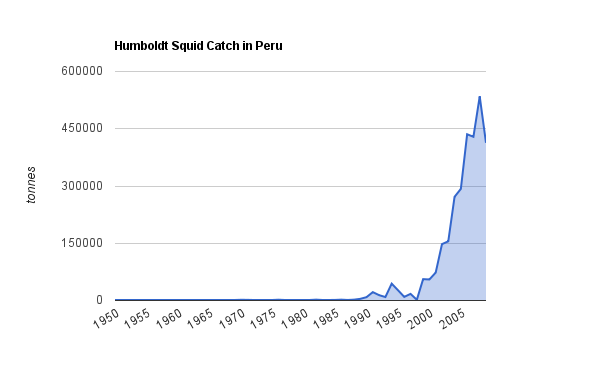 So if Humboldt squid were overfished in the 90's, they made a decent comeback.

It looks like the catch was all over the place during that decade. The real low point was 1998, which my gentle readers may recall (depending on their geographic location) as a freakishly strong El Niño year. The resultant peculiar oceanography is generally considered to be the cause of low squid catch, to my knowledge.

But, maybe Dr. Clarke knew something I don't know! I really couldn't say.

Thanks to Julie for sending me the obit.

* I just linked to the Humboldt squid fact page for the idly curious. To get the raw data I used for the graph you must follow this tortuous route: Click on Statistics in the horizontal nav bar. Click on Global Capture Production in the left vertical nav bar. Click on Global Capture Production (online query) under Available Formats&Information Products. Under the Country tab, open Americas and check the box next to Peru. Under the Species tab, open Molluscs, then Squids, Cuttlefishes, and Octopuses, then check the box next to Jumbo flying squid. Click on submit in the upper right.

I AM NOT EVEN KIDDING. That's what you have to do to squeeze data out of FAO.
** In the original version of this post, I incorrectly slammed OpenOffice. I'd forgotten that when I upgraded to Ubuntu 11.04 they swapped out OO for LibreOffice. Frankly I'm not impressed with Libre although supposedly it's a very close fork. They didn't make it easy to go back to OO, either.