Danna Staaf
I thought I'd write a compelling story about Humboldt squid and one of their favorite prey items, the lightfish Vinciguerria. These two creatures are quite the dynamic duo: one flashing like a red-and-white strobe, the other studded with glowing photophores. They clearly belong at some kind of deep-sea rave.

But I'm riding a train, and I keep getting distracted by the scenery. I can't help it; I love the California hills!

By the fifth false start, I realized that if I wanted to post anything today, it would have to be light and fluffy. So here is a picture I took of a juvenile Humboldt squid in an aquarium: 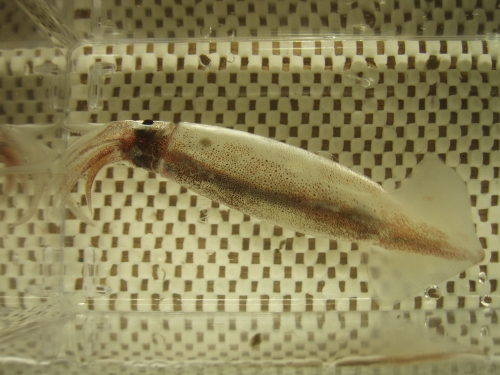 Isn't it pretty? It's about as long as a grown-up human hand. It's showing off its chromatophores really well in this picture--each one of those little spots is a pixel in the squid's full-body display.

To me, the most impressive part of the display is the fins, where you can't see any chromatophores at all. They're there, though. They're just so scrunched up you can't see them.

Poor squid--it might be trying to match that weird background I gave it, but squid aren't nearly as adept at camouflage as their cuttlefish cousins.