Doug Sweetser
Newtonian gravity binds us to this rock, while EM presents us with the messages from the heavens. The math of the EM is heavenly compared to Newtonian gravity. Let's review some of the flaws in that old but still useful approach to gravity.

Newton's theory is static, static, static. It took me a while of fiddling with Mathematica before I wrote that in functional concrete (phi[x[t], y[t], z[t]]). Time is a parameter, not an equal player. While the potential theory has global symmetry - adding a constant to phi will not change a thing - there is no obvious local gauge symmetry, some function that depends on x, y, and z. This has two consequences. With local gauge symmetry comes a conservation law. By picking an appropriate gauge, then one might find a wave equation that would say how fast the force travels.

I have spent most of the week playing with Mathematica notebooks, ping-ponging between the one for Newtonian gravity and this one for EM. The software has its limitations. It drives right on by point singularities which is too bad since that is where all the charge lives. There is always a way to do it right, if such a way can be found. Since I no longer pony up for the tech support contract, I often am at a loss for how to do simple things ("Please put the charge on that side of the equals sign, OK?"). We have a classic love/hate relationship.

EM will have something graceful to say about all of these topics, although I may not be the best spokesperson.

[correction: worked on the brackets]


<begin ???>
A fun detail in the switch from the Newtonian G action to EM was the change in how I wrote phi:


Should I think of the parameter as time in the Newtonian action but as the invariant interval for EM? I suspect that since it is a parameter, this was a flight of fancy, which I am prone to do.

Mathematica also insisted that I write the current coupling twice. The reason is that the force uses position and velocity, while the field equations use the potential and their derivatives. Compare the first term:

If I was really clever with Mathematica, I might be able to do this, but it is not worth the effort. Yet it may also be an important detail: vary one pair of variables to get the force equations, another to get the field equations.
<end ???>

EM 2. The static form
The way this was implemented was to keep the first term, nothing else. The static actions of Newton and EM look darn similar, as Henry noted long ago in comments:

Static Newton action:
[corrections: the dt's were not there in the initial draft]

The only difference is the sign on the field equations. The force equations are necessarily the same for a static field:

One cannot tell if like charges attract or repel, it all depends on phi. What phi can be is determined by the field equations:

Now what is phi? Oops, this is where physics gets physical. The simplest case is a point charge.  Here are two positive energy potential energy solutions:

Plug these solutions back into the force equations:

Now we can conclude that like charges attract for gravity, but repel for EM.

EM 3. The action under rotations - invariant

The matter term is a scalar, so there is nothing to rotate.

The interaction term requires that both the current and potential are rotated. The dot product is taken of these two terms. Dot products do not change if the coordinates are rotated.

The technical challenge is to show that the field term is invariant under a rotation. Both the derivative and the potential must be rotated to form the field. If one does a rotation around the z axis, the z term is unaltered, but x and y mix things up: 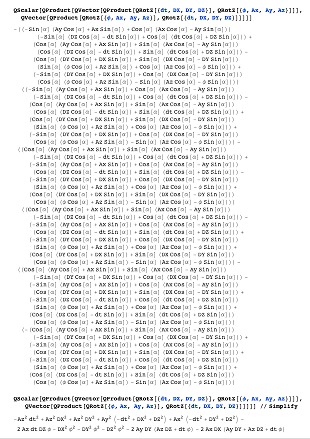 Repeat this process, but with the differential written on the right. That will flip the signs of the curl terms. Form the product of these two, looking at the resulting scalar. Lots of detailed work there, hope you don't get a minus sign wrong anywhere. How bad is it really?

That is the kind of grind I let Mathematica do, but it still took me a few hours to set things up (plus plenty of false starts).

EM4: The action under boosts - invariant

Just like Newton, the action is invariant under a global gauge transformation:


where k, u, v, and w are constant functions. Take derivatives, and the global gauge transformations bow out of the way.

What is much more important are the local gauge transformations:

Here is the question:

Electric charge conservation is a direct result of gauge symmetry.

This is Euler-Lagrange applied to the matter and interaction actions, varying the position and velocity:

I am also foggy about how to make the force fully relativistic. I fought with Mathematica long enough on the details to just give up seeing the gamma or first term in the right spot.
<end ???>

Apply Euler-Lagrange again, this time varying the potential and changes in the potential. That involves the interaction and the field actions. The result are Gauss's and Ampere's laws:

Similarly for y and z.

EM 8. Solutions to the field equations

<begin ???>
I didn't spend any time on this section, which is a shame. Anyone know of a simple dynamic solution to play with? That could be of use to me. Time to branch out from charge over distance.
<end ???>

EM 9. Solutions to the force equations

Is it fair to say the Maxwell equations and the quantum field theory behind the work is the most precisely confirmed theory in physics? Discuss among yourselves.

This is what I really wanted to talk about, but it is late...

<begin ???>
There are two ways to spot spin in an action that I am aware of. The first is in the field term. If the order of indexes is changed in the tensor representation, and the field strength tensor flips signs, that is the signal that the action has an odd integer spin field. The integer part I think comes out of there being a static field. If it was half integer, particle exchanges would not leave things static.

In the quaternion representation, if the order of operators is reversed and signs flip, I would argue that is the same darn thing (I can draw a map between my terms and the standard antisymmetric tensor representation).

The second place to see spin is in the interaction term. I am completely ripping off Feynman here, specifically chapter 3 of his "Lectures on Gravitation". He took the current coupling term JA and did a Fourier transform on the A to get a current-current interaction, JJ'/k2. To make things simpler, imagine the current is only along the Z axis. Live in that reference frame, and there is no current in the X or Y directions. Simple enough.

Now imagine a different reference frame. That would create virtual current in X and Y as a relativistic effect. How does one work with virtual currents? That is why Feynman shows: build something but make sure it cancels out. Here we go:

Those are both currents along the z direction made up of currents from X and Y. An angular spin momentum projection operator is the superposition of these two products:

It is vital that the imaginary part is zero.

[Correction/clarification. There is no constraint on the current density for its size. The norm of the potential should be unity so it can represent the group U(1). Instead of taking the Fourier transform of A to get a J, do the inverse transform, taking the J to a potential A'/|A|/p2.

The exponential has a norm of one and a scale factor from the Fourier transform. Use both to make a spin projection operator to impress your fiends.
<end ???>

Snarky puzzle: Construct a spin 2 projection operator. Two factors of 2 will be required.

I decided to move the trial balloon to the end of the blog. The discussion of it has detracted from the main thrust of the post. I retain hope for its future, but that is the future, not today.
<begin TEST BALLOON 2>
I am unable to spot U(1) symmetry in interaction term. I am unable to spot U(1) symmetry in interaction term. The group U(1) can be represented by a complex number with a norm of one. Quaternions are the three complex numbers that share the same real. If the potential is normalized, which is just a constraint on the potential, then it will necessarily contain the group U(1) symmetry within it. A problem with this approach is that a potential can be arbitrarily large, but not arbitrarily small. Include a scale factor. The change of variables goes like so:

This is an isomorphism, the same thing written a different way. The advantage is the ability to see SU(2) which has U(1) as a subgroup. The quaternion potential A can be viewed as a circle with a size of one or larger, with a larger size associated with greater charge. If A happens to point in the direction of J, then the two will commute (otherwise no).

The symbol count was cut down using scalar[] and vector[] operators. LaTeXiT was having trouble with the long expressions.
<end TRIAL BALLOON>
The Stand-Up Physicist
More Articles All Articles
About