Doug Sweetser
Nature abhors a magnetic monopole, although she adores gravitational and electric monopoles. The homogeneous Maxwell equations are the ones that need no currents, known as the no magnetic monopoles and Faraday's laws. There are three ways to derive the homogeneous Maxwell equations. The first way is to use vector identities. This is the simplest approach, the one most widely used. Pick out a particular way to write the electric and magnetic field, and the job is done. The divergence of a curl is a long way to say zero. Define the magnetic field as a curl, then its divergence is zero, and there are no magnetic monopoles hiding behind the couch.

The second approach uses differential geometry power tools, filled with the goblins of tensors, dual vector spaces, and exterior derivatives. Only math knights can survive such a passage. The most important theorems in differential geometry are recruited to do battle. Anyone calling themselves a mathematical physicist will have mastered this approach earlier in their career. I cannot be your guide on such a quest, as I am not the Stand-Up Mathematical Physicists.
Skip or click this dramatic reading of this blog: 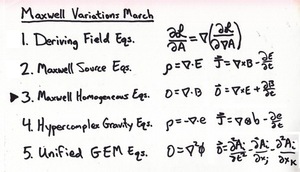 The third path uses the same three part harmony as the previous blog: pick a Lagrange density wisely, apply Euler-Lagrange, then choose a gauge. Actually, the third step can be skipped. Foreshadowing note: I will use the same line again for the GEM unified field equation derivation, the fifth and final blog in this series. 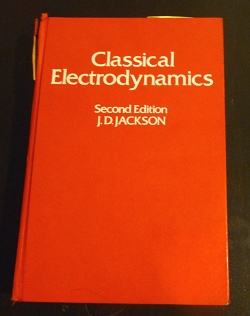 Logical consistency is good. This Lagrange density technique for the homogeneous equations is not widely known. The reason is simple: it is not in the red book, "Classical Electrodynamics" by J. D. Jackson. He writes:

The Lagrangian (12.85) yields the inhomogeneous Maxwell equations, but not the homogeneous ones. This is because the field strength tensor

was chosen so that the homogeneous equations were satisfied automatically.

Jackson went for door number one, the vector identities. This does not sound good to my ear: be clever, get the desired result. While true, it is not an answer to the issue raised, which is to find a Lagrange density that generates the homogeneous Maxwell equations.

What Lagrange density would give me the two homogeneous equations? I had no clue. Actually, I did have one clue. I recalled reading in Jackson that there were two combinations of EM fields that were invariant under a Lorentz transformation: B2 - E2 and E.B. The derivation of the inhomogeneous or source Maxwell equations used the former. It would be cute if the the dot product of these two fields resulted in the homogeneous Maxwell equations.

Let's find a road to this dot product. The starting point is the same as last week, the two gauge-free quaternion derivatives of a quaternion potential:


Calculate the norm of these two:


Take the difference of the two norms:


This dot product will often be zero: either field could be zero, or the fields could be at right angles. In other situations, the dot product will not be zero. Like last week, I know this is Lorentz invariant, but lack a short demonstration of that fact.

The Euler-Lagrange equations eat partial derivatives for breakfast, whether they happen to be zero or not. Write out Ex Bx by its component parts.

Here is the magnetic field:

And the electric field:

So the product is: 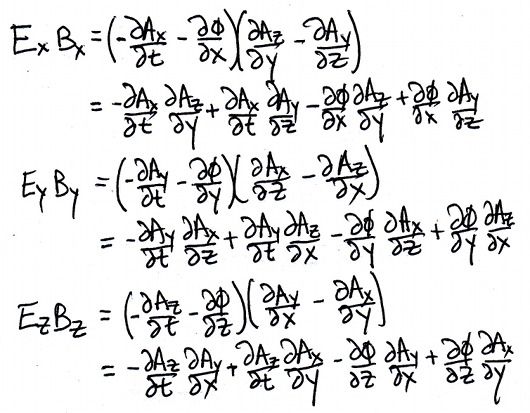 Here is the proposed Lagrange density for the Maxwell homogeneous equations in its component parts:

This week there are only 16 terms instead of 22 needed for the source equations. All the terms have a maximally-mixed quality, one part from the scalar, and one from x, y, and z positions. Half the signs are positive, half are negative, a perfect setup for cancellation. No terms are squared, no factors of two to track.

Here is a mini-refresher on putting the Euler-Lagrange equations to work: 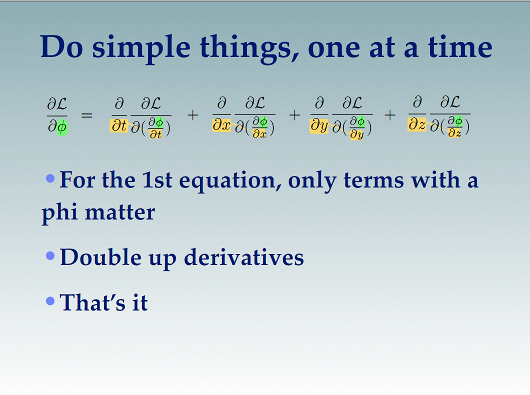 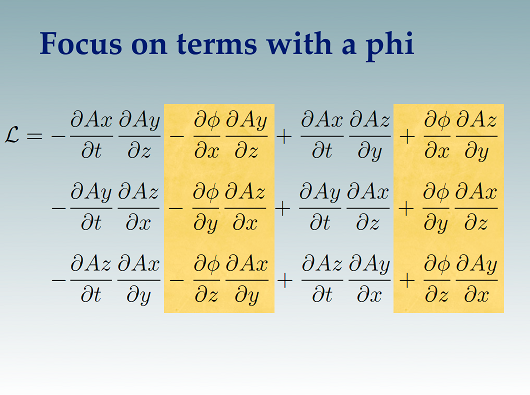 Half the terms can be ignored, good. Look for a pattern with the signs. 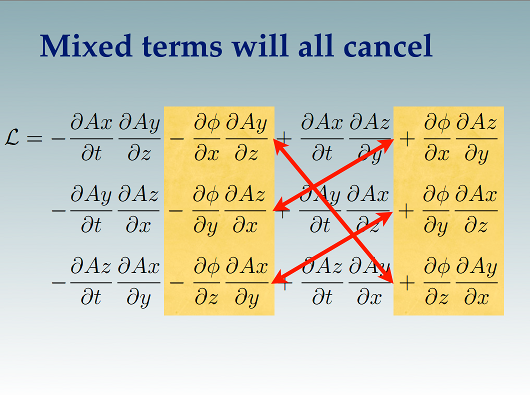 Look to see how this can be summarized. 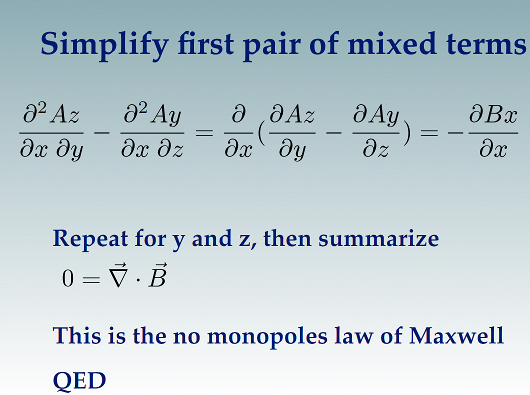 Repeat the process, this time focusing on terms with Ax: 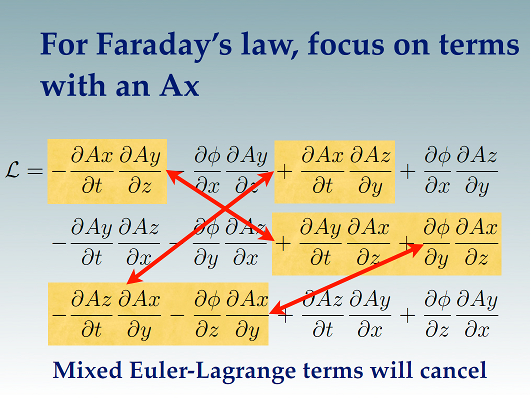 A summary statement is trickier to figure out. 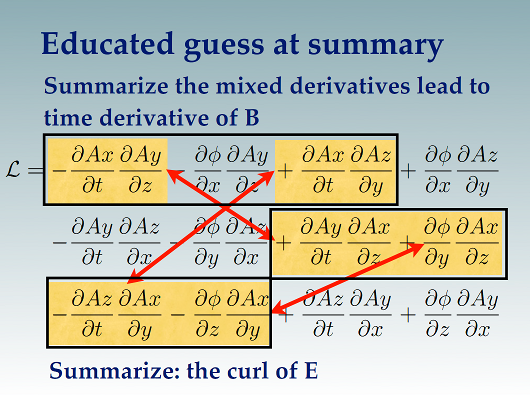 It will require some looking to see it. Here is the summary. 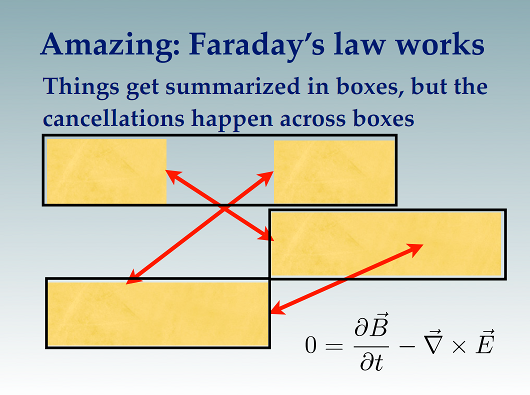 With the graphic representation, the derivation of all four Maxwell equations can be taken in at once: 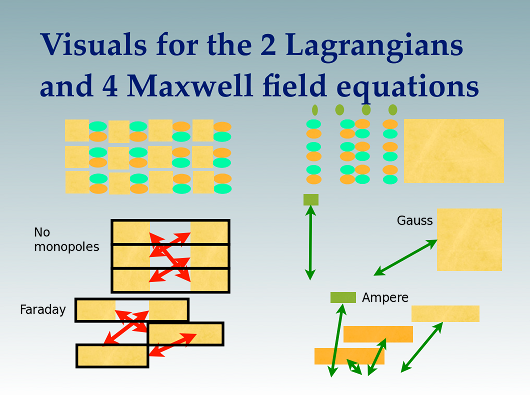 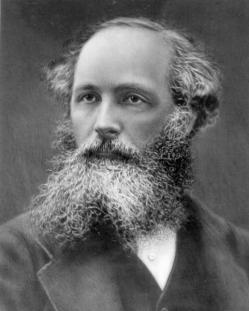 I should admit my own point of vanity, an issue of excessive pride. Maxwell is the number one physicists on the list of those unknown to the general public. Maxwell worked in a time before electric lights, let alone computers. He was so bright he figure out that Saturn's rings must be made of particles so the system could be stable mathematically. I have no idea how to approach such an issue.  "It is one of the most remarkable applications of mathematics to physics that I have ever seen," according to George Airy in the day. He also made contributions to the study of color and dimensional analysis.

And then there is "A Treatise on Electricity and Magnetism" in two volumes. I audited a class at BU that used Jackson. In that semester, I decided to look up the old book. It is a tough read because he used German notation for everything. I still recall seeing one of the homework problems solved by Maxwell in the text. I got the sense that Jackson was an Americanized update of the Treatise.

Maxwell wanted to use quaternions for his work. Recall that quaternions were an important and popular subject in his day, instead of a historical footnote. He had taken a class from Hamilton himself, the man who coined the phrases dot, cross, div, grad, curl, and all that for the math born in quaternion multiplication. His good friend Tait worked with them extensively. The first edition did have two sections with quaternions in the title (vol. 1 and vol. 2, 1873). He used pure quaternions, ones where the scalar is set to zero. A pure quaternion is functionally no different from a 3-vector.

My feeling of excessive pride comes from accomplishing something that Maxwell wanted to get done. This in no way means I am on his level. Equally strong is how absurd this feat is. I am so clumsy doing physics. I can be great on a puzzle, where there is one clue that doesn't look like a clue, but I store it away for use decades later. The BU class would have been in the mid-90s. I started the quaternion derivation somewhere around 2008. I may be able to make progress on impossible puzzles. There's a skill that will not pay the bills.

I recommend you repeat this work with your own hand. Time will slip away as the patterns intertwine. Leave these calculations on your desk. People will presume you are the smartest person they know.

Snarky puzzle
[correction: Find the flaw in this question :-) ]

Take one of the quaternion derivative ways to write the E and B fields and square it. Notice that the scalar is a Lagrange density that will be able to generate all four of the Maxwell equations via the Euler-Lagrange equation... [correction: NO, generates the homogeneous equations, not the source equations.]

Math overdose, scary-as-shit bonus problem: do something with the two 3-vectors generated [from the product that makes E.B].


Bet against the Higgs being found, buy the t-shirt