Doug Sweetser
The title is a playful variation on a line from a Bogart movie, The Treasure of the Sierra Madre.  That was an adaptation from a novel of the same title:

"All right," Curtin shouted back. "If you are the [LHC] police, where are your [Higgs]? Let's see them."
"[Higgs], to god-damned hell with [Higgs]! We have no [Higgs]. In fact, we don't need [Higgs]. I don't have to show you any stinking [Higgs], you god-damned cabrón and ching' tu madre! Come out from that shit-hole of yours. I have to speak to you."

This blog will explain why we need to see the Higgs at the LHC. My studies offer an alternative. The big idea is that if a way to account for how gravity changes a symmetric metric, and build that into a cleverly constructed Lagrangian, then there will be no need for the Higgs.[click or skip this reading of the blog]

In the lingo of the World Series of Poker, I am all in for my bet against the Higgs particle being detected. The claim is on the front of the t-shirt. I have an inventory of $800 worth of t-shirts I sell globally. The IRS knows about them via a Schedule C. 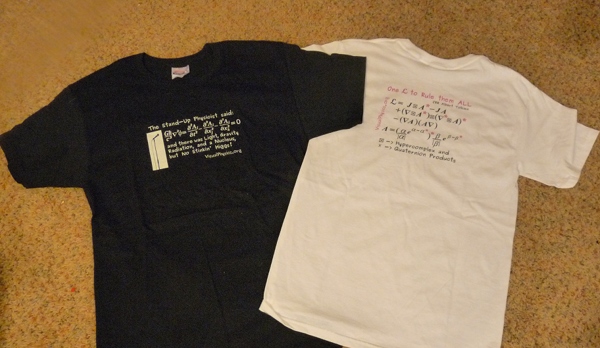 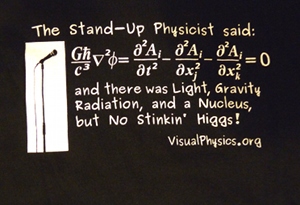 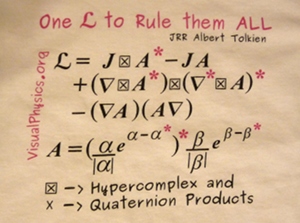 If the Higgs is found, I will be sending a check to Prof. Arkani-Hamed. This is not a bet, it is a payout. Nami has a position at the Institute for Advanced Study at Princeton, one of the highest perches in academia. You can have a bet with a peer, but he does not work the AM shift in the basement as I do. In an article, he said he was so confident the Higgs would be found, he was willing to wager a home mortgage payment. Time runs out on this payout in 2017.

The Lagrangian for the standard model had a problem: all the gauge bosons had to be massless. That works for EM, it works for the strong force, but it does not work for the weak force. In 1964, three generations of researchers came up with a fix: Higgs, Engler and Brout, and Guralnik-Hagen-Kibble. 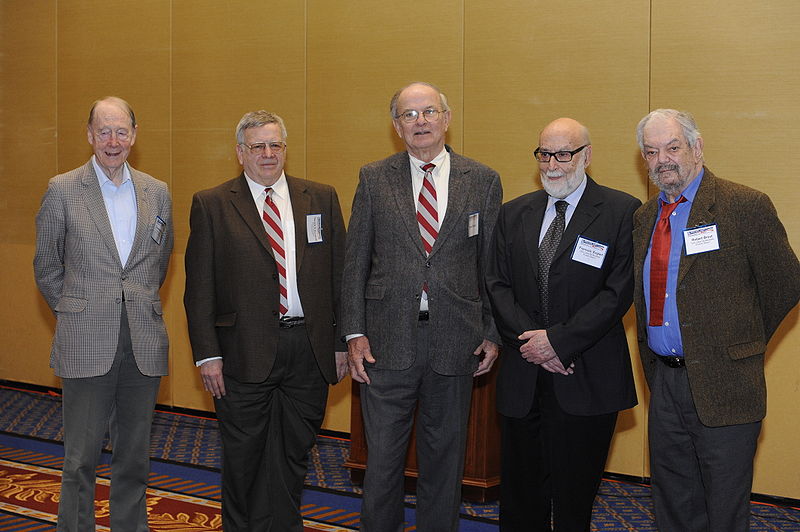 There are only 5 people in the photo. I’ll let you guess who is missing, a modest man who has decided to dodge the lime light. Peter Higgs got the opportunity to rewrite his paper after a rejection. He put in a closing line about there being a boson to detect. This may be why his name is reference more than the others. If anyone has a blog devoted to the history of this discovery by the gang-of-6, send me an email and I will add it to the post.

Instead one postulates that the vacuum solution state is spontaneously broken. A false vacuum energy is not where any particle wants to be. It is the Mexican Sombero

(available for $15 from http://mariachiconnection.com). The difference between the height of the hat and low part dictates the mass. The Higgs mechanism may also have consequences for the mass of fermions via a Yukawa coupling, but I don’t understand that stuff.

The Higgs is not the only game in town for providing mass for the gauge bosons. The only two I had heard about before were technicolor and higher dimensions. I will let others with in depth knowledge comment or link to those subjects if they wish.

The search for the Goddamn Particle has gone on for decades. Leon Lederman wanted to use that title for his book as a reflection of the frustration. An editor convinced him that the shorter title, God Particle, would generate more sales. It certainly was effective. Peter H. was not pleased because he appreciates that religious people could be offended. The slogan is not too modest either. Will the LHC be consistent with all previous searches and not see the Higgs boson? Us folks on the sideline only have to wait until the end of 2012 to know. There should be enough data collected by then to give the Higgs boson a thumbs down. If there is a signal on the positive side, the machine will be closed down and given an upgrade, focusing the efforts on finding relevant new information about the Higgs.

Let’s reflect on the gauge invariance of the EM Lagrangian. That sounds so fancy only experts can understand it. With quaternions, the subject is approachable. Take the 4-derivative of a 4-potential:

Note: the letter g is defined as a gauge field.
This is the simplest derivative of a quaternion potential one could construct. It contains two of the most important fields in physics, the electric and magnetic fields in a quaternion 3-vector that has the Lorentz transformation properties of an antisymmetric rank 2 tensor. An accident? I don’t think so.

What is the quaternion scalar g? It is not a Lorentz invariant scalar which requires a plus sign to be the Lorenz gauge.

[sidebar: Notice the different spelling between the invariant scalar name and the gauge? The Danish physicist Ludvig Lorenz was not the Dutch physicist Hendrik Lorentz. A silly American wrote an influential textbook with the error years ago. Most don’t know about this issue. Some do know, and go with the cultural flow. Out here on the ultra conservative fringe, we don’t care about popularity. We only hope to become more right, having ample examples of earlier errors. Lessons learned should be used consistently.]

The quaternion scalar can be found along the diagonal of the rank 2 asymmetric tensor Du Av. The E and B fields make up the off-diagonal terms. To make the quaternion 4-derivative of a 4-potential invariant under a gauge transformation, subtract these terms away:

Choose whatever combo-meal of the time derivative of phi or the divergence of A you wish. It doesn’t matter because they are subtracted away. The path from this quaternion 3-vector expression to the quaternion scalar that is a Lorentz scalar for the Lagrangian will be left for the snarky puzzle.

We have experimental data that says the changes caused by gravity induce changes in a symmetric metric. Symmetric changes are symmetric. Quaternions cannot do the job. I am exploring using an algebra that is even less popular than quaternions to do the job. The rules of multiplication are identical except that all the minus signs get erased. That much is simple. A long running discussion with David Halliday on my “Time in Bed with Space” blog has refined what I can say about these numbers. For this blog, let’s call them California quaternions to reflect the all-positive nature of their products.

Take the same 4-derivative and the same 4-potential, but use the California quaternion rules of multiplication:

Notice that the quaternion scalar g is identical to the one seen before. Wipe it out the same way:

The quaternion 3-vectors small e and b are gauge invariant. I cannot prove to the skeptical reader that these fields have anything to do with gravity as that would take too long (I don’t know how to write in the margins of this web site). The same trick to go from a quaternion 3-vector to a Lorentz invariant scalar is used.

Is it conceivable that the small e and b fields are related to how gravity works? A sanity check is to look at the symmetric curl in b which only has positive signs, so looks like it could account for symmetric changes in a symmetric metric. The most practical approach to gravity is Newton’s pure scalar theory. A more refined and sublime theory is Einstein’s pure rank 2 theory of general relativity. Between rank 0 and rank 2 is a pure rank 1 hypothesis. That is where my work lives. I like having Newton on the ground floor and Einstein in the penthouse. On my level is Maxwell’s theory for EM which has been extended with two additional gauge groups to cover the weak and the strong forces. In a chess analogy, it feels like all my pieces cover the center of the board.

I will proceed with the hypothesis that the e and b fields are related to gravity. To have a mass for all four fields in EM and gravity - E, B, e and b - the fields must be gauge dependent. That has already been done in equations 1 and 3. What goes into the Lagrangian is a Lorentz scalar. That is formulated by forming the product of two of these field strengths. What will show up as far as the gauge is concerned is g2. To make the term going into the Lagrangian invariant under a gauge transformation, subtract one g2 from the other:

Notice that no current density terms show up in the Lagrangian. One cannot unify gravity where like charges attract and EM where like charges repel, and expect to have a unified charge that knows how to both attract and repel. What is more appealing is this Lagrangian will apply to a vacuum state, and thus resonate with all the work done on vacuum states for the Higgs. To be honest, this is not a vacuum state. For that to be the case, the quaternion scalar and 3-vector would both have to be zero. While the quaternion scalar is zero, the quaternion 3-vector is not. Much work would be required to putting that information to good use.


Separately the field strengths all depend on gauge. Because the gauges exactly cancel, the Lagrangian overall is invariant under a gauge transformation, good news for photons, gluons, and now gravitons. If you want to see the field equations that result by applying Euler-Lagrange, they are on the front of the t-shirt.

Most people who enter the World Series of Poker don’t win. A fellow I played poker with for serveral years, Rob Varkonyi, did win $2 million in 2002. Time will tell if my all in bet against the Higgs wins the $10 billion jackpot the work at the LHC represents.

Snarky puzzle.
Factor B2 - E2. That should remind you of problems back in high school, maybe junior high, maybe first grade if you are Gauss II. Earlier in this post, it was shown how to make a gauge invariant combo of -E + B. When the order of operators flip, only terms with a cross product or curl change signs. Do that here. Crash the two gauge invariant quaternion 3-vectors to make a quaternion and Lorentz invariant scalar. Poynt to the meaning of the resulting quaternion 3-vector.
Next Late Monday: The Sexy Standard Model Symmetries