Patrick Lockerby
The Pitch and the Pendulum

Some people take comfort in the back-and-forth sway of the political pendulum. It is part of the greatness of our ‘two-party system’, they contend; it reflects the American aversion to extremism on ‘either side’. For the mainstream media, charting each degree of the pendulum’s swing is the essence of the 24-hour news cycle.
New Internationalist Magazine, November 2010

It has been argued too many times to need a citation that opposing parties in a demoracy are merely two sides of the same coin.  That concept puts me in mind of product lines from the same company being advertised as rival brands.   U.K. TV adverts in the 1950s would one day have the proverbial houswife use "White Tide, White Tide, always wash with White Tide - White Tide gets clothes cleanest, deep down clean"2 but the next day exhort her to "use new Tide with bluinite". 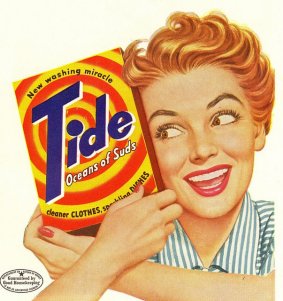 The political pendulum swings, in my inexpert opinion, not so much from the people's experience under a particular party's governance, but from the pitch.

The pitch3, or spiel is the language of the jingle writer, the fairground barker, the market trader, the con artist and the win-power-at-all-costs politician.  The pitch, as words and body language,  is tailored to the whole context, that is to say, the audience and the environment.  It is somewhat of a cliche that a doorstep salesman will ask a grown woman if her mother is home.  Politicians delight in kissing babies.  If you want people to think that your product or spiel is based in sound science, put on a white coat.

The ideal spiel hypnotises the critical functions of the brain and persuades the mark that he or she is experiencing undiluted truth.  In the truthiness stakes, the spiel beats the best of plain unvarnished rhetoric hands down!

There is a frightening prospect before us if we fail to control advertising. There has been a description of the insidious subconscious technique used in the United States in a recent book by Vance Packard, and American advertising firms are already operating in this country. Motivational research is being conducted by psychologists and new ways are being discovered of manipulating the public.

Let us beware of these dangers, the dangers of the new techniques developing which will mould public opinion in such a way that the public will not be able to exercise any conscious control over its own mind.
Hansard, 1958

Here are some more political quotes on advertising, from Hansard, 1958.  They reveal much about the spieler's art.

If it were ever shown that there was any ingredient in cigarette smoke that is harmful to the human system we should do everything possible to remove it. Research to date has not discovered any such ingredient.

"Some years ago, a director of the Brewers' Society, speaking with rather more frankness than is shown nowadays, said: We want to get the beer drinking habit instilled into thousands—almost millions—of young men who at present do not know the taste of beer.

There is one particularly noxious advertisement, issued by S. H. Benson on behalf of the Guinness Company, which is headed, "Guinness Popularity Poll." It is a picture of a rather unattractive-looking man in a saloon bar. The question is, "When did you drink your first Guinness?". The answer is, "About the same time that I smoked my first pipe".

There is an attractive picture of a tree which says: Think of the look of amazement on your friends' faces when they see these exquisite fairly-like beauties in your home and garden! One should remember that the friends would have to wait for thirty-five years before the tree began to look like that.

I only want to say a word or two about detergents. I think that the public is getting thoroughly "fed up" with the detergent propaganda which has been going on month after month on television and in the Press. Through my door yesterday. as chance happened, came a new pamphlet advertising one of the Hedley products which claimed that a wonderful new ingredient called "Bluinite" had been discovered, which had a double action and contained blue speckles, and so on.

My hon. Friend the Member for Rossendale (Mr. Anthony Greenwood), who takes a particular interest in this matter, told the House something about these detergents when we were talking about consumer protection a few months ago. What he did not tell the House, and what I would like to say, is that a good deal of careful chemical research into detergents has just been undertaken.

The manufacturers give the impression that if fabrics are washed in these products then, in some mysterious way, they are made clean. [HON. MEMBERS: "Whiter than white."] The manufacturers say "Whiter than white" or "Bluer than blue", but the implication is that the clothes are made cleaner. Of course, they do not actually say that because that is not true. I have had tests carried out on the results of using three of these products, Persil, Tide and Fairy Snow. Persil is made by Messrs. Crosfield, a subsidiary of Unilever and advertised by J. Walter Thompson. Tide is made by Thomas Hedley and Co. and advertised by Lambe and Robinson. Fairy Snow is also made by Thomas Hedley and advertised by Messrs. Young and Rubicam.

I have here samples of fabrics which I should like the Minister's experts to examine after this debate. If an ordinary fabric is washed six times in each of these products, far from making the fabric cleaner there goes into it an optical dye. This optical dye cannot be removed from the fabric and not only is the fabric not cleaner, but actually it is made dirtier with a substance which there is no way of removing. I have had a report on this which states: The principal detergent powders such as Daz, Dreft, Fab, Omo, Spel, and the soap powders Fairy Snow, Oxydol and Persil contain optical bleach. This is an invisible dyestuff which reflects ultra-violet light. Optical bleach is not in itself harmful, but laboratory tests are now beginning to discover that concentrations of this dyestuff in some powders is building up to an extent when it is harmful. I will not labour the point. Everyone understands that detergent advertising is a racket and people are sick of it. The fact is that these products not only do not do what the makers claim, but they do damage to the fabrics which are washed in them.

I was going to say a word about political advertising, but I have my eye on the clock.

Politics bears more than a passing resemblance to the alternation of generations.  It may even be the case that the political pendulum is swung, at least in part, by an alternation of human generations.  Like father, like son may apply in some spheres, but I suggest that the swing vote is influenced by many voters of a particular generation rejecting the politics of their elders.

Pendulum politics is far removed from the stabilising influences of genetics in nature.  If a population of animals is to remain stable as a distinct species, it appears to me that either opposites must attract or the extreme and the average must exhibit mutual attraction.  Were it otherwise, the population in a stable environment would continually drift to one extreme or the other and rapidly become a new species.

If only politics was like genetics, all countries would have broadly similar, highly stable, middle-of-the-road political views and politics would be more boring than it already is. 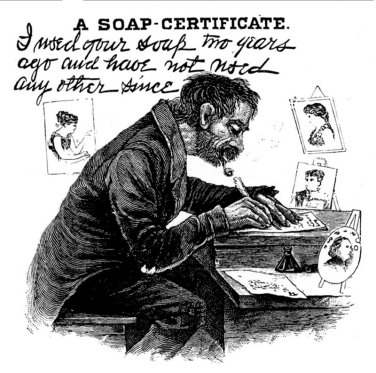 2 - If I recall correctly, this jingle was sung by Jimmy Young.

3 - Pitch - a framing or slanting of words to reach a target audience.
.
.
The Chatter Box
More Articles All Articles
About