It’s that time of the year again. You probably think I mean Christmas, but as a virologist the sight of glitter, fairy lights and moulting pine trees immediately makes me think of the flu season. And if there’s one thing that can ruin your family’s Christmas, it’s the arrival of that particular unwanted guest.

But there are lots of myths around about flu. Here’s a quick guide to some common knowledge that actually turns out to be wrong.

You probably haven’t. Four or five weeks ago, I would have said that you definitely hadn’t, but the first laboratory confirmed cases of the 2014-15 season are now with us, so if you have those familiar symptoms, you may well be one of those unlucky enough to have a preview of the coming epidemic. However, the balance of probabilities right now is that you don’t have the influenza virus but one of the many other things that regularly inflict similar misery on us – like respiratory syncytial virus, a coronavirus or an enterovirus.

This last trio give you severe doses of what we generally call the common cold. Real flu, however, is caused by a different group> of viruses. Symptoms of flu are more severe, including high temperatures, aches and pains, lethargy and can also include feeling nauseous. If you have a bit of a headache and feel sniffley, it’s more likely to be a cold.

But the flu will muscle all of these things out of the picture as the winter’s epidemic builds. More and more of us are likely to be having real flu rather than just bad colds. 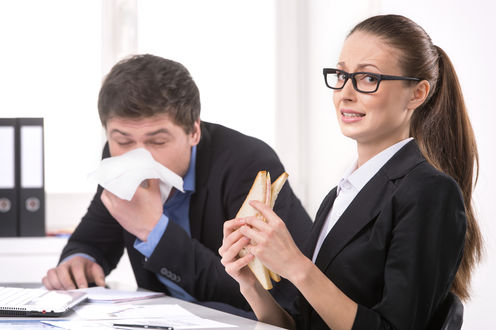 If you're sick, stay home. Shutterstock

Okay, there is no foolproof method of protecting yourself. If somebody does give vent to a hurricane-force sneeze on that crowded bus, then the air could well be loaded with aerosolized virus, and that virus may linger long after the sneezer has left the bus. But there are ways you can minimize your risk. Multiple use. Bus by Shutterstock

A lot of people catch flu, not from inhaling sneeze-aerosol, but from touching surfaces that have been sneezed on, or have had hand-caught sneezes wiped on them – such as the bell the sneezing passenger pressed to leave the bus, or the hand rail near the door. This is called fomite transmission, and you can minimize the chances of you picking up a virus this way by simply remembering not to put your fingers in your mouth, nose or eyes while you are out of the house.

“Hands down” is the motto, and then wash your hands when you get home. This way the flu virus goes down the drain instead of into your body. Carry a bottle of hand-gel in your pocket for those occasions when you are eating out. How about a DVD? Film by Shutterstock

Yes, I know, you’ve had worse, stiff (if wet) upper lip and all that. But such macho attitudes do no favors to other people. While the vast majority of younger people suffer for three days and then gradually return to the Christmas spirit, for many elderly people a bout of flu can mean their last Christmas.

So do them a favor – if you feel unwell, stay at home, get a hot drink and some DVDs and wait until you are better before returning to the outside world. Thousands of vulnerable individuals die every year because tough young people insist on battling though.

And at the very least, your fellow travelers and colleagues might appreciate it too.

Yes it is. Vaccination is for everybody. Not just to protect yourself, but to prevent you spreading it to others. There are three types of flu virus: A, B and C. As the first two occur most often, these are the ones covered by seasonal vaccines, developed each year. Getting the jab. Vaccine by Shutterstock

Some people are particularly vulnerable to flu – those in older age but also pregnant women, adults and children, those with underlying health conditions and those with weak immune systems. These groups should certainly go for an annual flu jab. While your local health center will probably turn you away and tell you to come back once high-priority cases have been dealt with, they are doing that because they have limited time and public money.

But there are plenty of private providers – pharmacies and supermarkets – that will vaccinate you much sooner for as little as the cost of a movie ticket.

5. We can catch it by eating infected chickens Flu is fundamentally a disease of birds, meaning that at any one time, most of the world’s of flu virus particles are in ducks, geese and seagulls rather than humans. If the television ancestry show "Who Do You Think You Are?" ever gets round to featuring a human seasonal flu virus as a guest, then the ancestral trails would all eventually lead back to birds.

But the flu viruses we suffer from are rather specialized beasts, that have journeyed a long way from their duck pond origins and adapted especially to the task of living and breeding in us. So it is very difficult for us to catch a bird flu and conversely difficult for the birds to catch one of ours.

The recent arrival of bird flu strain H5N8 in the UK poses no risk to humans as consumers of poultry. So enjoy your turkey. It is perfectly safe. But please, please, first wash your hands.