Michael White
Most years, we generally don't worry about the flu (unless we're paid to worry about it, or we belong to an especially susceptible population). Yet some years, like this one, threats of a pandemic flu virus make it on everyone's radar screen. So exactly what is it that makes a flu virus reach pandemic proportions?

A group of researchers at the US Centers for Disease Control, Mt. Sinai and Harvard recently used engineered versions of the disastrous 1918 flu virus (don't try this at home!) to learn just what makes a flu virus go global.

The researchers focused specifically on transmissibility. Flu virus transmission generally takes place in two forms: direct contact (e.g., nasal discharge goes from a toddler's nose-picking hand, onto her food, and then into her sister's mouth - yes, my kids got the flu last week, in case you were wondering); and aerosol transmission via sneezes and coughs.

In order to understand what made a pandemic virus like the 1918 flu so transmissible, the CDC researchers did a little genetic engineering. They swapped in pieces from the 1918 flu in an attempt to turn a non-transmissible avian flu virus into a highly transmissible version.

The obvious question here is, how do you study the transmission of a dangerous, genetically engineered flu virus without the risk of starting a new pandemic? Step one is a secure, highly self-contained facility to keep the virus in place. Step two is to get some ferrets.

As it turns out, flu virus transmission in ferrets is remarkably similar to transmission in humans. Thus the CDC researchers infected ferrets with various genetically engineered flu strains, and measured transmission. 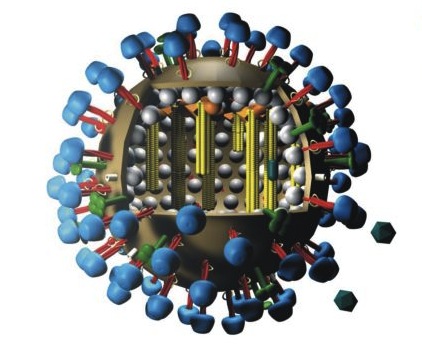 With ferrets, you measure transmission in two ways. One is to test for direct transmission by infecting a ferret with a dose of flu, and placing it in a cage with non-infected ferrets. To test for airborne transmission, you place individual ferrets in their own open-air cages. In this case, the ferrets have no direct contact with each other, but they can spread the flu by 'respiratory droplets', to use the technical term for aerosolized nasal mucus.

Flu viruses have a gene that's obviously involved in transmission, called HA. (The H part of the HxNy virus nomenclature is named for the HA gene.) Viruses are basically floating packages of genetic material wrapped up in a protein capsule. To replicate, they need to get inside of a cell, where they hijack their hosts' replication machinery. The HA protein resides on the virus capsule, and it's basically the viral targeting system. HA grabs onto cell surface proteins that are heavily modified with carbohydrates called sialic acid. Different cell types express different sialic acid-linked cell surface proteins. Avian flu virus HAs specialize in recognizing cell surface proteins found inside of the intestinal tracts of various species of poultry. Human flu virus HA proteins tend to recognize sialic acid groups found in the human upper respiratory tract. This is one reason why bird flu isn't so transmissible between humans - the virus, expecting a duck's intestine, finds instead a human nasal passage. Bird flu HA proteins aren't so great at latching on to and entering human respiratory tract cells.

Thus the CDC researchers started their gene-swap experiments with HA. They took the HA gene from the 1918 flu (which again, was highly transmissible in humans), and put it into a strain of bird flu. The 1918 version of the HA gene transformed a non-transmissible strain of bird flu into a highly transmissible one - but by direct contact only. This engineered strain could not be transmitted by respiratory droplets. (A technical side note: to get this to work, the researchers had to also swap in the 1918 version of neuraminidase - a gene that goes hand-in-hand with HA when it comes to recognizing different cell surface proteins. HA is required to latch on and enter the cell; neuriminidase is required to get back out when it's time for the virus to spread.)

So, HA is part of the story, but it wasn't enough to turn a strain of bird flu into a highly transmissible pandemic human flu. After HA, the researchers couldn't figure out which gene to try next, so they started swapping all of them at random. Using the random strategy, they struck gold.

Besides HA and its conjugate neuraminidase, only one other gene was required to turn the avian flu virus into one that was highly transmissible in ferrets, by both direct contact and airborne transmission. The 1918 flu version of a gene called PB2, together with the 1918 HA and neuraminidase, completely transformed the bird flu strain. (Another technical side note - some previous research has also implicated PB2 in transmissibility, so this isn't a completely new finding.)

PB2 is an RNA polymerase, a protein critical for replicating the virus genetic material. PB2 was the key to making the bird flu strain transmit by aerosol. And not only was the 1918 PB2 version of the gene able to confer transmissibility on a bird flu strain, but a single amino acid change, lysine to glutamate (lysine being the 1918 variant, glutamate the avian variant) was enough to largely disable the 1918 flu. That's actually a frightening thought, given the rather high mutation rate that viruses experience: a single mutation was enough to switch the 1918 flu between transmissible and non-transmssible forms.

What's so critical about this mutation? The CDC researchers found that a virus strain harboring PB2 with the lysine variant is able to survive at 33˚C (about 91˚F), while strains with the glutamate variant are not. 33˚C is the typical temperature in your upper respiratory tract. This result is highly suggestive: highly transmissible human flu viruses need to 1) recognize upper respiratory tract cell surface proteins, and 2) be able to replicate at the lower temperature of your airway passages. Bird flu strains, which search out gut cell surface proteins, can replicate at a cozy 37˚C, but human strains must operate at chiller temperatures if they want to spread efficiently.

This scenario is just speculation for now (further research needs show that the low-temperature result holds in living respiratory passages, and not just in a petri dish), but it looks very promising. Eventually, we would like to be able to look at the genetic sequence of a flu virus and predict what kind of threat it poses. Flu viruses are extremely diverse, and so this is a difficult task, but with genetic engineering and enough ferrets, we can make progress.