Erin Richards
If you have suffered the flu recently, then you know that it’s quite miserable. All of the sneezing, sore throat, fever and aching can really put a damper on your day (or week for some of us). Even taking preventative measures like getting that season’s “flu shot” may not be enough to protect you from a highly infectious strain of influenza.

Thanks to the collaborative efforts of the CDC and Novavax Inc., a vaccine building biotech company, researchers may have the key to protect against these high-risk and potently infectious strains of the flu virus.  Vaccines can be made from virus-like particles (VPL) to prevent further infection and scientists have utilized this idea to use VPLs from the infamous 1918 Spanish influenza virus to protect against both the Spanish flu and a highly infectious strain of the avian flu strain H5N1.

By using VPLs from the 1918 outbreak of the Spanish influenza, scientists designed a recombinant vaccine to protect against the original virus strain and tested its effects against other highly pathogenic strains of influenza. Both mice and ferrets served as animal models, and were vaccinated either intravenously (by injection) or intranasal exposure (via nose). All of the VLP-immunized animals, in both types of administered vaccine, were protected when exposed to a lethal dose of the original strain of the 1918 strain of influenza. Additionally, the animals were also protected from similar doses of contemporary and highly infectious avian influenza strain H5N1, taken from a human case in 2004. 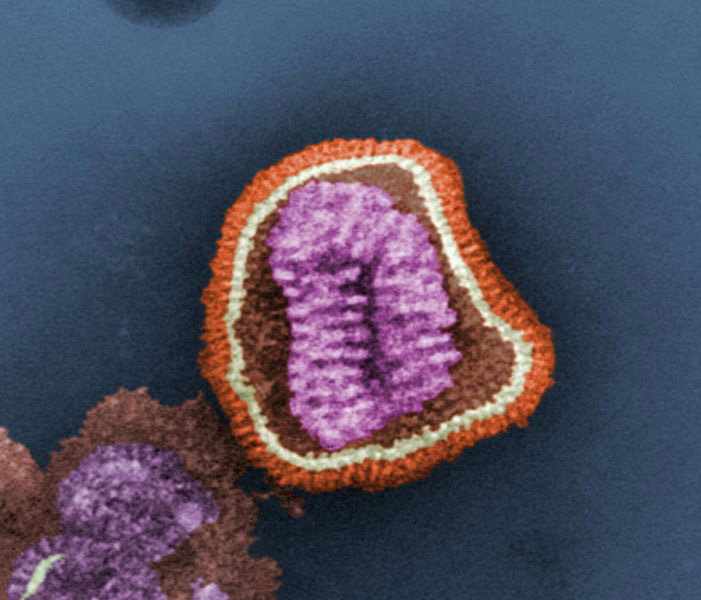 This image shows the detailed structure of the influenza virus, taken with an transmission electron micrograph (TEM).  VPL vaccines take certain viral particles, like proteins, which put together can prime the immune system to further attack of a real influenza virus. Photo credit: Fermilab Today, CDC

The preclinical results of the study are published in the March 2009 online issue of the Journal of Virology.

Based on these pre-clinical results, scientists postulate that this form of live virus may be the next step to offering better immunity from infectious strains of influenza that cause both seasonal flu infectious and possibly more serious pandemic outbreaks.

"Unlike other non-live influenza vaccines, the VLPs are uniquely positioned to stimulate immunity through multiple mechanisms," said Dr. Penny Heaton, Chief Medical Officer at Novavax.  "First, they contain (hemagglutinin) HA protein that is the same structure as the live virus, which may stimulate HA antibodies of several types that not only prevent the virus from attaching to cells but also prevent the virus from fusing with cells.  Second, the VLPs contain neuraminidase (NA) which may stimulate production of antibody that prevents spread of the virus down the respiratory tract.  Finally, the structure of the HA and NA proteins and the way in which they are embedded in lipids on the surface of the VLP may activate the innate immune system providing protection against both the H1N1 and H5N1 strains."

The VPL vaccine was based upon three viral proteins including hemagglutinin (HA), neuraminidase (NA), and matrix 1 (M1) all taken from the influenza strain of the 1918 Spanish flu. When put together, the proteins formed a three-dimensional structure that was similar to the virus, but without proper
genetic material needed to divide and cause infection. This allowed the immune system to recognize and make antibodies against the foreign structure, and allowed for a much faster response when faced with the real virus. Priming the immune system with the VPL vaccine was therefore able to stave off later infections with the same virus.

However, the immunization also protected against the avian flu vaccine, which is unusual for this type of vaccine. The mechanism for the protective action by the H1N1 vaccine is under further study.  Although cross protection has been seen in vaccines with the same hemagglutinin (HA) types, it has not been seen with different HA types as seen in this study.