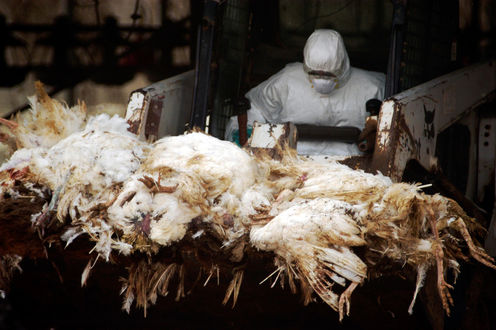 Bird flu: Livestock and farmers most at risk. Shutterstock

The UK has just recorded its second outbreak of bird flu in less than three months. At the end of November, the relatively new subtype H5N8 – which was first spotted in late 2009 in China and which has since made its way westwards as far as the Netherlands – turned up in Yorkshire.

Now the rather more familiar bird flu subtype H7N7, which has long-established American and Eurasian variants, has appeared on a poultry farm in Hampshire. So what is bird flu and why are public health authorities so wary of it? Here’s what you need to know:

Bird flu is caused by influenza type A, the same virus that causes pandemic and seasonal flu in humans. Our human flu is down to just two subtypes: H1N1 and H3N2 which are, respectively, descendants of the 2009 and 1968 pandemic flu strains. Bird flu, by contrast, has dozens of subtypes – 128 so far. Of these 128 subtypes, 69 have been recorded at least once in Europe since the turn of the millennium.

Flu is fundamentally a bird disease. All the other species that catch flu, like ourselves, have variants that have become adapted to their new hosts, but whose ancestry can always, ultimately, be traced back to an ancestor lurking inside a bird. Some of the subtypes currently sitting quietly in ducks, seagulls or other feathered friends, may be the ancestors of human pandemic strains of the future.

2. Some birds appear to be super-carriers

The common teal, a small handsome duck with a striking green eye patch on its russet-coloured head, is the champion bird flu carrier with 21 subtypes recorded at one time or another. Others have fewer – and, of course, we can’t claim to have sampled every single species. For most birds, flu isn’t a major source of illness, and consequently the vast majority of bird flu subtypes are labelled “low pathogenicity avian influenza” or LPAI strains.

Some subtypes, however, aren’t so benign – and especially not in farm animals, which have lived under human protection for millennia and often lack the resistive capacities of their wild cousins. A handful of subtypes are labelled “high pathogenicity avian influenza” or HPAI strains, and the most feared of all is H5N1 which has caused periodic devastation to poultry stocks across several continents as well as several hundred deaths among poultry farmers themselves. When people catch bird flu, the death rate can be high.

Although the occasional cases of bird flu in farmers have had sad outcomes, the virus doesn’t tend to transmit from person to person. Finding the reasons for this is a very active area of scientific research, but it looks likely that the main factor is that bird flu finds it difficult to stick to and enter the cells of human airways. As a result, you need a fairly massive dose to become infected. Looking into it. Lab test by Shutterstock

The only people who are likely to receive that kind of exposure are farmers who spend all day with their poultry. Even then, some simple health and safety measures, such as masks, can greatly reduce risk – so the majority of human bird flu cases are among farmers in the poorer parts of the world.

No current bird flu strain could cause an epidemic in humans, at least as far as we know.

The H7N7 bird flu that has just appeared in Hampshire is one of the more familiar strains. There will have to be some culling of birds, unfortunately, but no risk to humans is anticipated at all.

The Hampshire strain will probably, once the lab work has been done, turn out to be a typical European variant. There have been occasional infections of humans with H7N7, most recently in Italy in late August 2013 and, prior to that, in the Netherlands in February 2003.

Slightly more perplexing was November’s H5N8 apparition in Yorkshire – preceded by outbreaks in Germany and then the Netherlands. H5N8 is a more mysterious beast that seems to be a hybrid – “reassortant” to use virologist-speak – between the notorious H5N1 and something else unknown, which has been snaking westwards for five or six years now

Also on the World Health Organisation’s watch-list are H7N9 and H5N6, currently causing some concern in China. One thing we can be sure of – bird flu will be back in the news before long.