Comic books of the 1950s and 1960s made a point of their potential to terrify, with anthologies from Entertaining Comics, such as Haunt of Fear, Vault of Horror, and Tales of the Crypt, boasting covers with straplines such as “Within these pages dwell creatures from the terrifying beyond!” 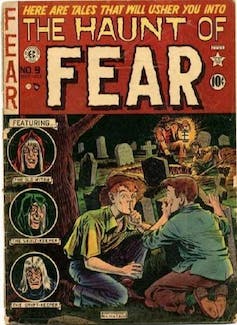 The Haunt of Fear. Entertaining Comics

The House of Mystery series from rival DC Comics asks: “Dare you enter the house of mystery?” – and cover art often depicts children or young adults on the cusp of discovering what lies within.

This teasing investigation and revelation of horror has always been a key trope in horror comics – from their earliest days to the resurgence of interest in the format in recent decades. As darkness descends around Halloween, here are some of the most chilling reads the graphic novel medium has to offer.

Do you wish Halloween could last a whole year, rather than just a day? Not if you were a member of Gotham’s organised criminal underworld during the city’s Long Halloween. 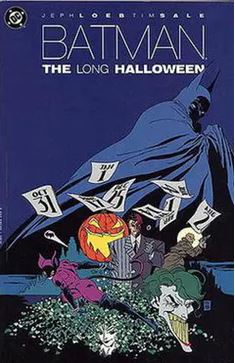 Written by Jeph Loeb, the series involves a mysterious serial killer who escalates the gang war between the city’s two most powerful mafia families, the Marconis and Falcones, by murdering members of each on specific holidays, earning the nickname of the “Holiday Killer”.

Owing as much to gangster films such as The Godfather as to classic Batman strips – the comic’s narrative begins in a dark room overlooking a mafia wedding from behind window blinds – The Long Halloween features the dark, film noir artwork of Tim Sale, perfectly capturing the twisted and paranoid mood of Gotham.

2. Aliens: Music of the Spears

This four-part series written by Chet Williamson takes the Aliens universe to some original and fascinating places. In a futuristic New York City, lives Damon Eddington, an obscure and under-appreciated classical music composer whose electronic symphonies have been made obsolete by the punk rock of heavily-modified synthetic androids who are able to thrash out songs faster and of longer duration than is humanly possible. 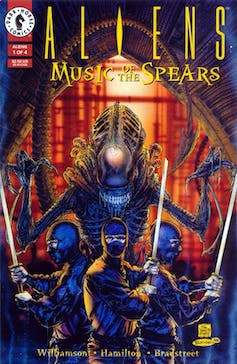 In response to his situation, Eddington sees the xenomorph as his perfect opera singer. With the help of his patron, the Synthsound corporation, he has a captured alien brought to maturity in a confined environment and then tortured in order produce the screams which Eddington records for his symphonies that he sees as rivals to Wagner.

Among the themes common to the Alien series, such as corporate espionage and biological weapons, Music of the Spears restores the xenomorph, originally drawn by Swiss artist HR Giger, as an artistic object. The comic’s depiction of the harnessing of the creature as musical performer, coupled with the extraction and sale of the Alien species’ “royal jelly” as a potent hallucinogenic street drug reverses the traditional alien-human consumer and consumed relationship, if only temporarily. It is not long before the captured creature breaks free of the containment that Eddington has placed it in, and wreaks vengeance on New York’s music lovers at a nearby concert venue.

3. The Dark Judges: Fall of Deadworld 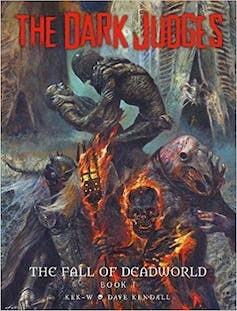 Deadworld exists in a hellish parallel plane to the 22nd-century Earth of 2000 AD’s Judge Dredd series, and The Fall of Deadworld, written by Kek-W (aka Nigel Long), narrates its descent into a graveyard of bones and wandering spirits.

The primary agent is Judge Death, Dredd’s deadliest foe and gothic emblem of what the law could become if taken to its ultimate extreme – “The Crime isss Life. The Sentence isss Death,” as Judge Death would say.

Mixing religious imagery with contemporary US politics, Fall of Deadworld provides unprecedented detail on the twisted psyches of the Dark Judges, and sympathetic portrayals of the resistance fighters, of an uninfected Judge, and of ordinary civilians caught up in the global crisis. 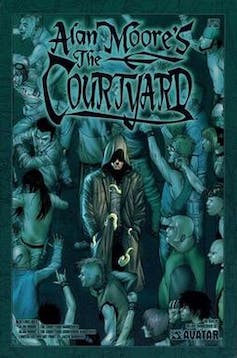 The Courtyard is a comic adaptation of Alan Moore’s graphic novel of the same name: his first, meticulously-researched interpretation of HP Lovecraft’s ever-popular cosmic horror cycle.

Protagonist Aldo Sax, an FBI expert in “anomaly theory” – in which seemingly unrelated dead end cases are connected to reveal a bigger picture – is sent Brooklyn to investigate a series of ritual murders. Sax, perhaps a personification of Lovecraft’s own sentiments, employs a prejudiced, outsider’s view of the world replete with racial slurs. 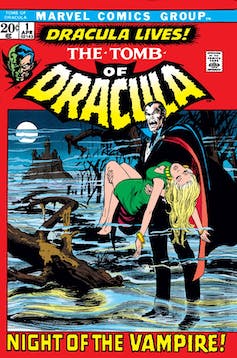 The Tomb of Dracula. Marvel Comics

Marvel’s take on the Dracula myth, Tomb of Dracula, is set in the modern day, where Frank Drake, a direct descendant of Count Dracula and stony broke, travels with his girlfriend, Jeanie, and his somewhat untrustworthy associate, Clifton, to claim Castle Dracula as his inheritance.

This reworks the focus on property of Bram Stoker’s famous Dracula novel, with Clifton convincing Drake to use this legacy to turn the castle into a museum or tourist hotspot. Inevitably, when this accidentally reawakens Dracula from his tomb, an ancient evil is unleashed on the present. The original 1970s Tomb of Dracula series is collected in the 2003 reprint, Essential Tomb of Dracula.

An excellent example of the Hellboy series, written and drawn by Mike Mignola. 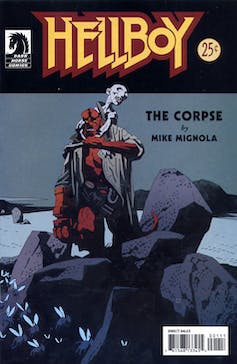 Set in Ireland in 1955, The Corpse is a short comic centred around Hellboy’s quest to bury the titular body at the behest of “the small folk” – sprites and faeries adapted from Celtic mythology – at one of four holy places in order that the small folk return an abducted baby to her parents.

The Corpse works in elements of folk gothic alongside Hellboy’s trademark humour: as Hellboy arrives at each grave site, he is told by the spirits of the dead that there is no more room. The plot is structured like an Irish ballad, a hero’s magical undertaking. While part of a larger Hellboy story arc, The Corpse is also a standalone piece that is a good representative of the narrative tone and art style of the rest.

These six examples provide a varied cross section of the ability of the comics medium to intrigue, chill or scare. Enter their pages with caution, reader, and enjoy the terrors which lurk within.

By Stuart Logan Lindsay, Post-doctoral Teaching Fellow in Literature&Languages, University of Stirling. This article is republished from The Conversation under a Creative Commons license. Read the original article.