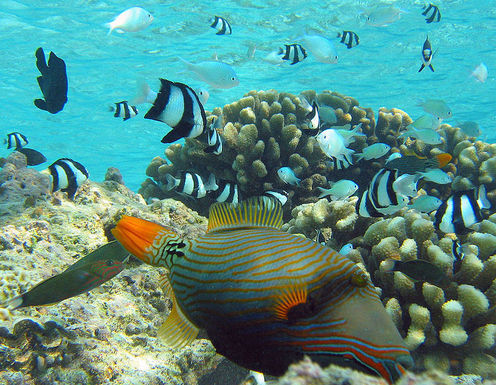 By William Feeney, University of Cambridge

Evolution allows animals to develop superb adaptations to survive and flourish in environmental niches. The evolution of fish eyes is one such intriguing example. However, tracing how different kinds of fish eyes evolved is not always easy. New research is finally throwing some light on this evolutionary feat and it is helping us understand how new species are born.

The diversity of life on Earth is a result of evolutionary processes acting over millions of years. Small changes to the genetic make-up of an organism, such as those that sometimes occur during sexual reproduction, can confer an advantage over competitors and are passed onto the next generation. Changes that result in a disadvantage, by contrast, are filtered out of the population.

Opsin (visual) genes are a central component of animal vision and provide fantastic examples of how changes at a molecular level, such as through gene duplication, can affect how animals perceive their environment. This is because molecular changes in opsin genes can result in measurable changes to the colours that an animal can perceive. These changes are important to study because they can help explain how diversity among species is created.

Compared to tetrapods – that is, mammals, amphibians, birds and reptiles – which possess a relatively stable opsin arrangement, gene duplications have helped a vast array of opsin genes to evolve in the bony fishes. In these fishes, the majority of opsin gene duplications are recognized to have occurred in the long-wave (red) and medium-wave (green) genes, with only one previously observed in the short-wave (blue) gene in the spiny-rayed fishes (which include basses and perches).

But, when compared to other gene families, the apparent lack of duplications in the blue opsin suggests that its story may be more complex than was appreciated.

With this in mind, Fabio Cortesi, Zuzana Musilová and colleagues set out to re-evaluate the evolutionary history of the blue opsin (SWS2) in bony fishes in a new study published in Proceedings of the National Academy of Sciences.

Using the latest gene-sequencing and data-mining techniques, they explored the genomes of close to 100 fish species to examine blue opsin diversity. They found a major gene duplication about 190-170m years ago in a species of fish called neoteleosts. They also found two other gene duplication events: one in the lizardfishes (Aulopiformes), which appears to have been an isolated event, and another that coincided with the emergence of the first percomorph fishes (about 110-130m years ago), which include the dottybacks (Pseudochromidae).

However, just knowing about gene duplication wasn’t enough. Not all changes in genes have an effect on the functions they serve in an animal.

To get an idea of whether this gene duplication conferred a function, they then conducted an in-depth study of the dusky dottyback, Pseudochromis fuscus. They used this species as it was found to possess three duplications of the blue opsin. Using techniques that allow assessment of the spectral sensitivities of an animal’s retina, they found that the dottyback’s retina possessed cone cells that had two sensitivity peaks which fell within the predicted range of the blue opsin duplication.

This showed that the duplication did indeed confer a function to detect blue light in their environment, which presumably helps them survive better there. The changes in genes have a lot to tell us about evolution, but it’s not always possible to understand the story. However, what Cortesi, Musilová and their colleagues have shown is that, with well-planned experiments, we can get enough of a peep into a complex process.

We can now say that facilitating the development of new visual sensitivities, gene duplications may allow species to thrive in different light environments which could ultimately result in the evolution of new species.

William Feeney, Endeavour Research Fellow at University of Cambridge, receives funding from an Endeavour Fellowship. This article was originally published on The Conversation. Read the original article.