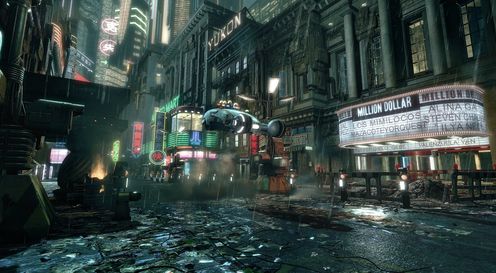 Science – or strange permutations of it at least – is everywhere in the cinema. At any one time on movie screens around the world, humans are being threatened by lethal viruses, cured from terminal illness by miracle elixirs, rendered superhuman with bionic limbs or made obsolete by robots possessing artificial intelligence.

But what are the facts behind these entertaining fictions? And how best to dispel the myths and misconceptions perpetuated by blockbuster films while also enlightening audiences on the real marvels of biotechnology?

For The Australian Society for Medical Research one solution has been to hold an annual Science in the Cinema event as part of National Science Week. Each event comprises a film screening and a Q&A session, with an expert panel addressing issues precipitated by scientific ideas that arise from a given movie.

Last week, the film up for discussion was Blade Runner which, 30 years after its release, is among contenders for one of the best science fiction films ever made.

Set in 2019 in Los Angeles, cutting-edge genetic engineering and bionic technology (or at least what was considered cutting edge in the 80s) is shown to have advanced to the point at which synthetic humanoid beings, called Replicants, are produced. These humanoids are synthesized by the Tyrell Corporation, whose motto is “more human than human”.

The film explores the relationship between humans and Replicants – in particular the need to “retire” rogue Replicants – raising questions about artificial life and where the boundaries of what we consider ethical and human lie. In this way, it provides the perfect catalyst for ideas about emerging biotechnology and its wider philosophical implications.

Joining the expert panel at the event were Dr David Nayagam, a researcher working on the bionic eye project at The Bionics Institute, Associate Professor Megan Munsie, a stem cell biologist and bio-ethicist from University of Melbourne and Dr Andi Horvath, a science communicator.

Because by the second day of incubation, any cells that have undergone reversion mutation give rise to revertant colonies … We’ve already tried it – ethyl methanesulfonate - as an alkylating agent and potent mutagen; it created a virus so lethal the subject was dead before it even left the table.
– Dr Eldon Tyrell in Blade Runner

One of the panel’s tasks was to discuss quotes from the film, such as the gobbledygook quoted above from the evil head of the Tyrell Corporation, which distorts core scientific principles as well as the role and motivation of scientists.

You think I’m a Replicant, don’t you?
- Rachel, Blade Runner

Other discussion following the film centered on how the biotechnology depicted in Blade Runner would need to be updated in the upcoming sequel, how different types of bionic eyes function, recent advances in synthetic organ production and their potential in personalized regenerative medicine.

Dispelling commonly-held misconceptions about medical science is always a focus. While the technology to generate new organs in the lab could be just around the corner, at the moment, mini-organs (brains, kidneys, guts) are a fascinating but simplistic version of the real thing.

While being an invaluable addition to medical research and our quest to understand normal function and what goes wrong in disease, they’re not yet at the stage where they can be used to solve the organ shortage crisis. The idea of “brain” transplants remains firmly in the realm of sci-fi.

This year’s panel also included Dr. Peta Clancy, a practicing visual artist, who spoke on how biotechnology can be represented and perceived in society.

According to Dr. Kumud Dhital, a transplant surgeon at St Vincent’s hospital in Sydney, who spoke at the conclusion of Dr Clancy’s residency in the hospital’s Heart and Lung Transplant Unit in 2012:

Knowledge from scientific research is generated through a very empirical process that, under strictly controlled conditions, produces verifiable and reproducible end-points that we consider to be “truths”. Artists, on the other hand, are not working so strictly with this notion of “truth”. They have a luxurious liberty to explore far broader theoretical or philosophical concepts. This gives them enormous space and leverage to provoke us with questions we normally wouldn’t consider or have the time to reflect upon.

Clancy has a rich history of collaboration with medical researchers, surgeons, doctors and patients. Her video work (a collaboration with artist Helen Pynor), The Body is a Big Place (2011), was created in consultation with scientists from the Heart Foundation Research Centre at Griffith University.

The Body is a Big Place.

In the piece, which also screened at Science in the Cinema, a heart perfusion system was used to reanimate a pair of fresh pig hearts during live performances. The work explored organ transplantation and the ambiguous philosophical thresholds between bodies, life and death, echoing many of the themes raised by Blade Runner.

The artists sought to encourage empathetic responses from viewers and a deeper awareness of their own bodies.

Replicants, like any other machine, are either a benefit or a hazard. If they’re a benefit it’s not my problem.
– Rick Deckard, Blade Runner

Medical research is constantly challenging our understanding of what is possible. It has the potential to greatly benefit society, but also raise substantive societal issues that need to be acknowledged and openly discussed.

Many issues raised at Science in the Cinema revolve around readjusting the boundaries of how we define life to match advances in medical technology. They also address what level of control society has, and should be able to exercise, over technological advancement.

Other questions centered on the point at which human clones or people with replacement bionic body parts might stop being “human”, whether it’s ethical for large corporations to fund advancements in medicine, and how cinematic representation of scientists creating out-of-control technology influence public acceptance of real science.

These issues should not be addressed by scientists alone.

We need to create opportunities and unique collaborations that encourage broader community engagement beyond fictitious portrayals on the big screen. Yet, as Science in the Cinema shows, that’s certainly a great place to start the conversation.

Katharine Adcroft is Biomedical Engineering Technician at Swinburne University of Technology; Megan Munsie is Head of Education, Ethics, Law&Community Awareness Unit, Stem Cells Australia at University of Melbourne, and Peta Clancy is Lecturer and Researcher in Faculty of Art, Design & Architecture at Monash University. This article was originally published on The Conversation. Read the original article. Top image credit: ElectricDynamite