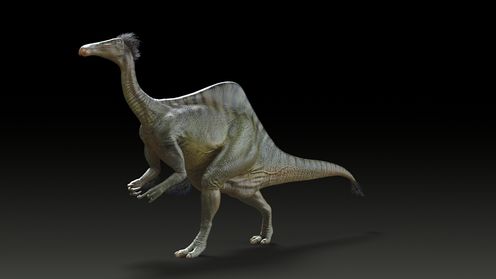 By Stephen Brusatte, University of Edinburgh

Everywhere scientists look it seems like they are finding dinosaurs. A new species is emerging at the astounding pace of one per week. And this continues with the announcement of perhaps the strangest dinosaur find over the past few years: the toothless, hump-backed, super-clawed omnivore Deinocheirus mirificus that lived about 70m years ago in what is now Mongolia.

Deinocheirus may even become a household name, thanks to spectacular new fossils from the Gobi Desert reported by South Korean paleontologist Young-Nam Lee and colleagues, who published their results in Nature. It is a one-of-a kind dinosaur – a creature so astoundingly weird that the world just can’t help take notice.

Half a century of wild speculation

It has been a banner year for dinosaur discoveries. First it was the “chicken from hell” and a dwarf tyrannosaur announced in the spring, then the long-snouted carnivore “Pinocchio rex” and the feathery glider Changyuraptor in the summer – and, over the past couple of months, we have been awed by the 65-ton, long-necked behemoth Dreadnoughtus and wowed by remarkable new fossils of the sail-backed, shark-eating Spinosaurus from Africa.

But Deinocheirus isn’t actually a new dinosaur. It has been known about for more than 50 years. As is often the case with dinosaurs, Deinocheirus was first reported based on a couple of bones that were enough to show scientists that they had found a new species, but not nearly enough to give a complete picture of where this species fit into the family tree, what it ate and how it interacted with other dinosaurs. Are you scared yet? Michael Skrepnick

Although the original fossils of Deinocheirus were fragmentary, they were epic. In fact, they were some of the most puzzling bits of a dinosaur that had ever been found. They weren’t a couple of ribs, or a few tail bones, or a small portion of the skull. No, they were a nearly complete set of forelimbs, measuring more than 2.4m in length, capped with scythe-like claws. These arms not only dwarfed an adult human in size, but they were the largest arms of a bipedal animal ever discovered, fossil or living.

What kind of body did these monstrous arms belong to? Over the past half century this has been one of the biggest mysteries in dinosaur paleontology. Cast copies of the record-breaking arms are popular museum exhibits worldwide, inspiring children to let their imaginations run wild and dream up what the rest of this bizarre creature would have looked like. Scientists have dreamt too – and over the past few decades countless expeditions to the Gobi have set out to find a complete skeleton of Deinocheirus.

It took a while, but Lee and his international squad of Korean, Mongolian, Japanese, Belgian, French and Canadian scientists have finally cracked the code. They found two partial skeletons that together reveal exactly what kind of head and body match the long arms. A mystery dating back to the darkest days of the Cold War, when such an international team had no hope of working in communist-controlled Mongolia, is no more.

It would have been a great disappointment if Deinocheirus was just some boring old dinosaur with long arms. But that is not the case. The rest of its body has a weirdness befitting of its strange arms. It turns out that Deinocheirus was an 11-metre-long, six-ton, long-snouted, duck-billed, toothless, hump-backed, bi-pedal plodder, which lived alongside a menagerie of other dinosaurs during the final few million years before all dinosaurs – except for birds – were snuffed out by an asteroid.

Puts a T. rex to shame

Deinocheirus was nearly the size of T. rex, and was a member of the subgroup of dinosaurs called theropods, which like T. rex were mostly carnivorous. But Deinocheirus was no bloodthirsty flesh eater. Fish scales and gastroliths – smooth stones that living birds use to grind plants – were found in its gut. It seems to have been a six-ton dinosaur garbage disposal – eating basically whatever it wanted.

Deinocheirus was no normal dinosaur, and that is a good thing. Because while it is always fun to solve puzzles in paleontology, I must admit a little bit of sadness that we no longer have the mystery of Deinocheirus to ponder. I didn’t like science very much as a kid and had little interest in dinosaurs, but I remember reading in school about this strange set of 70m-year-old arms, bigger than a human, found without a body in the far reaches of one of the world’s most hospitable deserts. It was the type of enigma that makes dinosaurs fun.

Today’s dinosaur-obsessed kids can no longer dream about solving the riddle of Deinocheirus, but there are still other mysteries out there. Like this one: how did a creature as big and bizarre as Deinocheirus function as a living animal – and why are there no such mind-bending six-ton, death-clawed, camel-humped omnivores around today?

Stephen Brusatte, Chancellor's Fellow in Vertebrate Palaentology at University of Edinburgh, does not work for, consult to, own shares in or receive funding from any company or organization that would benefit from this article, and has no relevant affiliations.