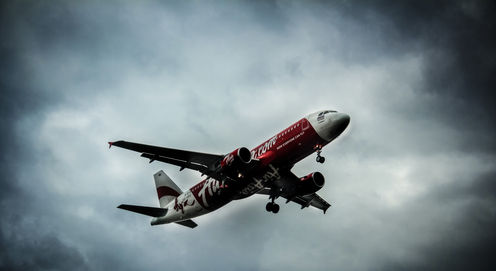 By Todd Lane, University of Melbourne

On December 28, AirAsia flight QZ8501 crashed into the sea between Indonesia and Singapore. Shortly before the crash, the pilots requested an alteration to the flight route due to severe weather. While the precise cause of the crash is not yet clear (with the aircraft’s black box still to be retrieved), it seems likely that weather played a role.

AirAsia CEO Tony Fernandes later said that “unique weather conditions” were present around the time of the crash. He reportedly stated that climate change may have played a part in more dangerous conditions for air travel, linking it to flooding in Malaysia and Thailand.

So, what does the science tell us about flying and climate change?

Thunderstorms are a significant hazard for aircraft, producing turbulence through upward and downward motion in the main body of a storm. This upward wind can exceed 100 kilometres per hour straight upwards; the downward motion is usually a little weaker. Aircraft try to avoid these regions due to the extreme turbulence they can produce. Storms, such as this one moving across Port Phillip Bay, can create hazardous turbulence for aircraft. mrpbps, CC BY

Other parts of thunderstorms can be hazardous too. Turbulence can occur well above thunderstorms, due to breaking atmospheric waves. Just like waves break in the ocean, there are waves in the atmosphere that can break above and around thunderstorms.

These waves occur in the clear air around a storm. So the storm margins can be hazardous as well.

Another danger storms pose is icing, which some reports have blamed for the crash. Ice can build up on the body of aircraft and engines can ingest large volumes of ice particles affecting their operation.

In the tropics, thunderstorms are very deep and almost impossible to fly over, so aircraft have to fly around the thunderstorm region. In situations like that encountered by the AirAsia plane, with a very large region of thunderstorm activity, it’s very difficult or impossible to navigate around or through without experiencing some kind of turbulence.

A rule of thumb often used is to avoid storms by 20 nautical miles (about 37 km). Pilots use visual cues and on-board radar, in collaboration with air traffic control, to assist avoidance.

Often with a large region of storms, pilots fly through cloudy conditions but avoid the most hazardous “convective cells”.

Out of the tropics

In mid-latitude regions away from the tropics we get the more traditional definition of clear-air turbulence (or CAT). This is associated with jet streams - regions of strong horizontal wind. Those jet streams can cause turbulence above and below them due to wind shear, which is a change in wind speed with height.

Clear-air turbulence is a significant hazard because it’s invisible. But it often occurs in shallow layers, so changing height by a few thousand feet can sometimes help to avoid it.

The final type of turbulence is that which occurs over mountains, known as mountain-wave turbulence. It also occurs in clear air, through a similar process to thunderstorm waves. Air flowing over mountains can generate waves that can break.

Regions with large mountains, such as New Zealand, the Himalayas and the Rocky Mountains in the United States, are well known for being turbulent. A plane flies towards dark clouds in Auckland. New Zealand is known for its turbulent skies. russellstreet, CC BY-SA

In 1992 a DC-8 cargo plane over the Colorado Rockies experienced extreme turbulence, losing one of its engines and part of its wing. Amazingly, this aircraft landed safely. You rarely hear of turbulence damaging aircraft, but it can occur.

Is there a climate link?

A provocative 2013 paper received a lot of media attention for drawing a link between climate change and turbulence. The researchers focused on model projections of future climate over the Atlantic Ocean and clear-air turbulence associated with the jet stream. They showed that there is a potential for an increase in turbulence along existing flight routes.

A lot of that increase was related to a poleward shift in the jet stream - something that is a robust signal in many climate models in both hemispheres. This shift put the jet streams closer to existing flight routes over the Atlantic Ocean.

The assumption made in ascertaining an increase in turbulence was that those routes would remain unchanged. But there’s a global trend in aviation for much more intelligent use of air space and much better hazard avoidance, so I anticipate that there would be quite rapid adaptation in the aviation industry to any trends in hazards.

Very few studies have examined aircraft turbulence in the tropics. Because of that essentially nothing has been done on what potential changes in tropical storms might mean for aviation.

There’s certainly been research showing that precipitation extremes in the tropics should increase in a warmer world. But there’s only an indirect link between precipitation intensity and the hazards at high altitudes where aircraft fly. Any changes in the nature of the aviation hazards are still to be determined.

Todd Lane, Associate Professor, School of Earth Sciences at University of Melbourne, receives funding from the Australian Research Council. He has received funding in the past from NASA and the U.S. Federal Aviation Administration. Todd is the current President of the Australian Meteorological Society (AMOS).