The skies over southern England were hazy on Friday April 08 2011.  In the evening the usual colors of sunset were absent.  A muddy grey-brown haze could be seen along the horizon.  That haze was caused by dust from the Sahara. 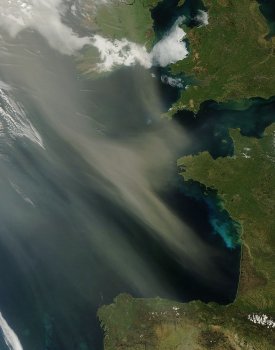 Dust from Sahara over Biscay, the English Channel and Ireland 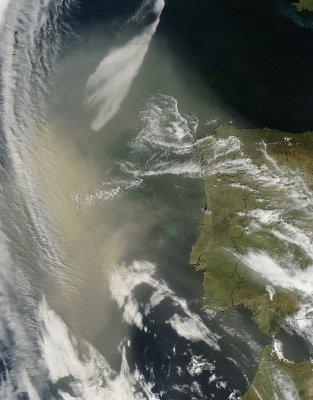 Dust cloud from Sahara off the coast of Portugal

Dust from the Sahara can be lifted to high altitudes in the SAL - Saharan Air Layer.  The dust is then carried by winds to distant lands and seas.  The current dust cloud is moving up the Atlantic, bringing hazy skies to Portugal, Spain, France, Britain and Ireland.

The SAL can cover an area the size of the continental U.S. and has been tracked as far west as the Caribbean Sea, Central America, and the Gulf of Mexico.
http://www.aoml.noaa.gov/hrd/tcfaq/A17.html

Atmospheric dust is studied as an important part of climate science.  It can affect regional weather systems.

People that live in Florida would expect the sands from the state beaches to blow into the air, and usually don't think of the sands and dust from the Saharan Desert twirling around them. However, winds do carry the desert dust across the Atlantic Ocean, and scientists have been studying what they do to Florida Thunderstorms.
http://www.nasa.gov/vision/earth/lookingatearth/florida_dust.html

Atmospheric dust can also affect global climate, through the planet's energy budget and the carbon cycle.

The global dust budget has been recognized as an important research topic related to the atmospheric environment and climate. Mineral dust aerosol can cause air quality hazards such as visibility impairment and respiratory problems, which can pose risks to human health and society. Mineral dust aerosols also play an important role in the Earth's climate in several ways, including exerting a significant direct and indirect influence on the atmospheric radiation balance. They do so directly through scattering and absorbing shortwave and longwave radiation, and indirectly by acting as cloud condensation nuclei or ice nuclei and modifying the optical properties of clouds. In addition, dust aerosol can serve as a reaction surface for reactive gases, thus affecting atmospheric photochemistry. When these aerosols falls onto the ocean, the iron content in dust acts as a nutrient for marine phytoplankton and can thus enhance photosynthesis, in turn influencing the global carbon cycle.
http://www.eoearth.org/article/Global_dust_budget

Although this dust is abrasive, it is much less of a threat to aviation than the dust from a volcanic eruption.  Whereas volcanic dust melts in a jet engine and coats the moving parts, sand needs a higher temperature to melt, and so is merely passed through a jet engine.  In the case of piston engines, in the air or on land, desert dust can quickly choke an air filter.  The effect can range from the stalling of the engine to the somewhat trivial need to change an air filter more often.

Dust is a nuisance to humans, but it is of great benefit to many organisms.  Dust from the Sahara contains nutrients which promote the growth of some marine organisms, helping reduce atmospheric CO2.  Dust carried across the entire Atlantic can provide nutrients to the tropical rain forests.

Observations of mesoscale and boundary-layer scale circulations affecting dust transport and uplift over the Sahara
http://www.faam.ac.uk/index.php/publications?view=publication&task=show&id=471