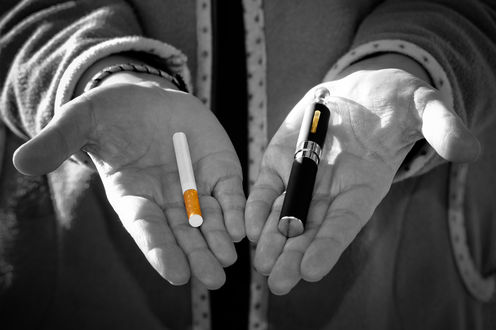 E-cigarettes are attracting massive interest for their potential in helping smokers quit, to reduce harm in those who switch from cigarettes or cut down, and in reducing the uptake of smoking in teenagers, where the argument runs that they would be best to vape instead of smoking.

Not to mention a third possibility: that they do neither.

This week saw the publication in JAMA of data from the world’s first longitudinal study of young teenagers who vape. The Los Angles study reported on six- and 12-month data from a ten-school cohort of 14-year-olds who started off as non-vapers. When data from the two follow-ups were combined, 5.7% of the students who had never tried an e-cigarette had smoked cigarettes, while 32% of those who had vaped had also smoked cigarettes: a rate nearly six times higher.

What can we make of this data? Professor Linda Bauld from Scotland’s University of Stirling highlighted some caveats in an article. She emphasized, as did the study authors, that this study cannot be argued to demonstrate a causal relationship between vaping and subsequent smoking (the so-called “gateway” hypothesis).

Professor Peter Hajek from the University of London was more dismissive, writing:

Far more likely, of course. But by no means not exclusively. Every year millions drink alcohol for the first time. Most then diversify their drinking, so early experimental drinking is nearly always followed by consumption of other alcoholic drinks. Hajek’s argument here is disturbingly parallel to that used by the tobacco industry for decades that tobacco advertising was only directed at smokers and that non-smokers (including children) were completely impervious to its appeals.

Hajek’s seductive analogy attempts to shut down any possibility that among kids now rushing into vaping in the United States (where e-cigarette use is now more prevalent than smoking), there may be large numbers of kids who in the absence of access to e-cigarettes would have never smoked.

The heavily promoted appeal of e-cigarettes is that they are virtually risk-free (although only time will tell here). It is likely that some kids who resolve not to smoke because they know it’s stupidly dangerous think “here’s a safe way to almost smoke … to have all the benefits of the ‘smoking performance’, all the benefits of a hip new trend without the risks”.

But once dependent on nicotine via e-cigarettes, it is not hard to imagine many kids being desensitized toward a new curiosity about smoking.

Hajek points out that smoking has been declining in US high school students for a decade, and that the decline has accelerated during the time that vaping has increased. He says:

it shows that e-cigarette experimentation is certainly not creating new smokers or slowing the decline in smoking prevalence. It may in fact be contributing to it.

This is a possibility, but Hajek then returns to his tobacco industry-like reasoning:

Vaping is strikingly non-attractive to non-smokers and virtually none progress to becoming daily vapers – unlike experimentation with cigarettes which leads to about half of experimenters becoming daily smokers.

The movement from experimenting to daily use with cigarettes was for decades facilitated by unregulated nicotine chemistry, massive advertising, beautiful packaging, and allowing smoking in every conceivable setting (normalization), the very strategies that e-cigarette advocates are now aggressively championing for vaping.

The business model for the success of vaping of course relies on many young people commencing and not just casually using e-cigarettes. And with predictions that the major tobacco companies now buying up the most successful e-cigarette start-ups will have 75% of the e-cigarette market within ten years, that business model will be one of dual use (smoking and e-cigarette use, not e-cigarettes instead of smoking).

Indeed, a recent study with a 12 month follow-up of vapers found that by far the most common outcome was dual use (smoking and vaping), not exclusive vaping. Of 192 daily vapers in the study, 160 (83%) were dual using at 12 months (see Table 3).

The JAMA study did not provide data on vaping or smoking frequency among its young subjects and Bauld writes:

On top of this, the way e-cigarette and tobacco use were measured was very basic, only determining whether people had “ever” or “recently” used them, not whether this was regular or sustained use. Importantly, the age group in the study had just moved to secondary school – a time of transition and trying new things.

But this age group has very few regular or long-term smokers. It is an age where smoking tends to be intermittent. But if we were dealing here with such evidence of uptake following sustained marketing of a new form of cigarette, big alarm bells would be ringing about what we’d be likely to see as the cohort aged.

Bauld correctly notes that the numbers in this study – just 222 non-smoking e-cigarette users – were very small, so caution is indicated. Obviously a larger study would be preferable, but we regularly see outbreaks of unbridled optimism about e-cigarettes from studies with equal or far smaller numbers.

A recent English national study, for example, demonstrated that vapers using “tank” systems daily for 12 months had a statistically significantly higher smoking cessation rates (27.54%) while there were no such differences when comparing non-daily tank users, cigalike e-cigarette users and smokers not using any type of e-cigarette. But there were only 19 daily tank vapers who quit in that study.

The Los Angeles cohort cannot prove nor disprove the gateway hypothesis. Indeed, it’s challenging to imagine any study design which could settle it. But it should provide major pause to those who blithely dismiss concerns about e-cigarette uptake as a minor issue of non consequence.

E-cigarette use in Australia is negligible compared to the United States and England. But Australia has the lowest smoking prevalence of any nation.

Finally, the seeming no-brainer that just cutting down cigarettes via e-cigarettes rather than quitting is beneficial is unfortunately also not supported by large prospective studies.

Simon Chapman is Professor of Public Health at University of Sydney. This article was originally published on The Conversation. Read the original article. Top image: Gianluca Rasile/Shutterstock