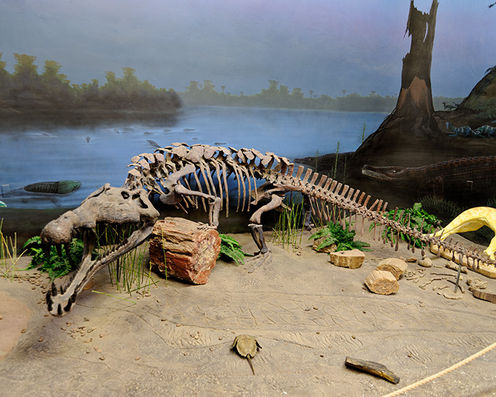 Phytosaur: still got it. Credit: BFS Man, CC BY

Some 220 million years ago, the Triassic Period marked the beginning of the age of dinosaurs. But by the time the earliest dinosaurs were just starting to appear in the fossil record, it was distant relatives of crocodiles that reigned over both the water and land.

Among these ancient reptiles, crocodile-like phytosaurs were the largest aquatic predators, whereas gigantic rauisuchids ruled the land. We know both of these animals from multiple fossil specimens from around the world, but how or if they interacted is poorly understood.

A joint team of researchers from the University of Tennessee and Virginia Tech analyzed the remains of some of the largest rauisuchids from North America and found bite marks on the bones of two separate animals. One fossil, a thigh bone from an animal estimated to be 30 feet long, actually showed evidence of at least three separate attacks.

The fossil was a serendipitous find in the collections at the University of California Museum of Paleontology in Berkeley. We came across this bone and realized pretty quickly we had something special. There are many bones that get dug up; not all are immediately processed, prepared, and studied. And no-one had recognized the importance of this specimen before we were able to borrow it and make our study. Among the other traces was a rare find: a tooth stuck in the rauisuchid’s thigh bone. Healed fossilized tissue surrounded the tooth and some of the other bite marks, but whether the marks came from a failed predation attempt or some other violent interaction between the two animals, the rauisuchid certainly survived the incident. Other bite marks, which lacked obvious evidence of healing, came later and we know that through predation or scavenging, the rauisuchid finally ended as a meal for at least two much smaller predators.

But what left these traces? Using computed tomography, or CT scanning, and 3D printing, we were able to “see” the whole tooth without removing it from the fossil and damaging the bone. From the shape of the tooth, it was obvious that it had once belonged to a large phytosaur. Finding teeth embedded directly in fossil bone is very, very rare.

This is the first embedded phytosaur tooth yet identified, and it gives us a smoking gun for interpreting this set of bite marks. Estimates based on the size of the tooth placed the phytosaur at roughly 18 feet in length, a respectable size for a phytosaur, but still small in comparison to the rauisuchid it had bitten.

The second bone told a similar story. This femur fragment also came from a large rauisuchid, and again, the unhealed bite marks had been left by a phytosaur. With their crocodile-like body shape, phytosaurs had always been interpreted as semi-aquatic, ambush predators.

Could it be that they were targeting much larger, terrestrial predators in their ecosystems? Or were they happy to take advantage of a free meal by scavenging? With only fragments of femora left to analyze, it is difficult to tell.

What is obvious is that the aquatic and terrestrial ecosystems of the Triassic were not as separate as we previously thought. The research, which we published in Naturwissenschaften, will call for us to go back and look at some of the assumptions we’ve had in regard to the late Triassic ecosystems. The distinctions between aquatic and terrestrial ecosystems have been over-simplified and we’ve made a case that the two spheres were intimately connected.

The bite marks preserved on these ancient bones demonstrate that organisms were interacting and feeding on one another across land and water. Also, this complex food web left no group un-targeted. Even the largest predators of their day often ended as meals for other meat eaters.

The Jackson School of Geosciences and the William J. Powers, Jr. Presidential Graduate Fellowship from the University of Texas at Austin provided support for CT scanning used in the research.

Stephanie Drumheller is a Lecturer at University of Tennessee. Michelle Stocker is a Research Scientist at Virginia Tech. Sterling Nesbitt is an Assistant Professor of Vertebrate Paleontology at Virginia Tech. Michelle Stocker and Sterling Nesbitt do not work for, consult to, own shares in or receive funding from any company or organization that would benefit from this article. They also have no relevant affiliations.