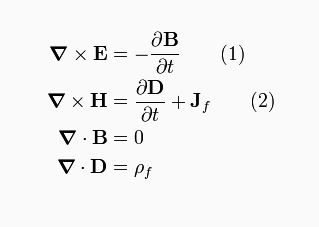 It’s hard to imagine life without mobile phones, radio and television. Yet the discovery of the electromagnetic waves that underpin such technologies grew out of an abstract theory that’s 150 years old.

Our knowledge of the existence of such waves is a direct result of James Clerk Maxwell’s theory of electromagnetism which was first published in January 1865. Electromagnetism itself was discovered physically rather than theoretically. Some time around 1820, the Danish physicist Hans Oersted noticed that when you switch on an electric current, a nearby magnet – such as the needle of a compass – actually jumps, as if the changing electric current were itself a magnet.

Then, in 1831 (the year Maxwell was born in Edinburgh) the English physicist and chemist Michael Faraday discovered that if you move a magnet through a coil of wire, you create an electric current in the wire without the aid of batteries or other electricity supply.

Nevertheless, basic technologies had begun to flow almost immediately after the phenomenon of electromagnetism was discovered: in particular, the telegraph – the first high-speed global telecommunications system.

Electromagnetism works … but how?

Without an adequate theoretical understanding of electromagnetism it was difficult to fix technological problems such as the overheating of telegraph wires, or the distortion of signals over long distances.

Not that the theory hadn’t progressed: physicists had quantified key aspects of the behavior of electric charges and currents. They had even begun the process of quantifying the more complex electrical and magnetic interactions in electromagnetism.

One of the key obstacles was that no-one knew how electric and magnetic forces were transmitted through space.

Most physicists assumed they acted instantaneously: if you hold a magnet near an iron nail the magnet seems to pull the nail immediately. You can’t see or hear or feel anything in the space between the magnet and the nail, so it seemed as if the magnetic force must act “at-a-distance”.

It must somehow leap directly from magnet to nail -– just as gravity appeared to leap instantaneously across the vastness of space from the sun to the Earth.

The success of Newtonian gravitational mathematics seemed to give support to this subjective view. For instance, to show that gravity causes planetary motion, all that was needed were Isaac Newton’s mathematical laws to deduce the shape of the planetary orbits and compare them with those observed by astronomers.

There’s no need to know how gravity actually gets from the sun to the planets, or from the Earth to a falling object, because there is no mathematical need to consider what happens in the space between the two interacting bodies.

Most of Newton’s disciples took this to mean that gravitational force didn’t propagate through space and time, but simply leapt instantly from sun to planet, from object to object.

The strong mathematical connections between gravity, electricity and magnetism reinforced the idea of electromagnetic action-at-a-distance.

Faraday was unconvinced. He was self-taught, so he didn’t understand the sophisticated mathematics being used by mainstream physicists to describe electricity and magnetism in this action-at-a-distance way.

But as a co-discoverer of electromagnetism he had an intimate practical feel for the subject, and he believed there must be some sort of electromagnetic “field” filling up the space surrounding electric and magnetic objects and assisting the propagation of these forces.

Maxwell intuitively agreed with him and proceeded to try to find the right mathematical language with which to develop Faraday’s field concept. Integral calculus (notably line and surface integrals, and volume integrals over finite spaces) had been the primary tool of action-at-a-distance theorists.

But Maxwell chose differential calculus (specifically, partial differential equations), as the language best suited to describe what happens at each point in the space between the interacting objects.

One reason he believed things were happening in this space is illustrated by Faraday’s example of iron filings scattered on a piece of paper placed on top of a magnet. The filings will align themselves into a specific pattern surrounding the magnet. The iron filings show the magnetic field of the magnet under the sheet of paper. Flickr/Windell Oskay, CC BY

Faraday’s idea was that the force from the magnet must affect the paper -– and therefore the space around the magnet -– even when the filings were not there to show it. In other words, the magnet created a “field of force”, and it was the whole field that made it possible for the magnet to affect each filing.

Maxwell was one of the very few mathematical physicists who paid any attention to Faraday’s field idea. It was a brave move for a young academic to take on the losing side in such a debate, but Maxwell could see that no-one really understood the nature and propagation of electromagnetism.

The puzzle of light

There was also another controversy raging at the time, concerning the nature of light. It was known that light traveled through space with a finite speed, rather than leaping instantaneously from its source to our eyes.

But no-one knew, a century-and-a-half ago, what light was actually made of.

Maxwell was about to solve all these mysteries.

In other words, Maxwell deduced mathematically that electromagnetic signals are not transmitted instantaneously, but are communicated through space as waves. And not only as waves in wires, but also waves that can travel through the air.

But there was more: these mathematical wireless electromagnetic waves travelled with the same speed as light, yet Maxwell’s calculations were based solely on electromagnetic phenomena. This prompted his characteristically modest understatement:

[…] it seems we have strong reason to conclude that light itself, (including radiant heat, and other radiations if any), is an electromagnetic disturbance in the form of waves propagated through the electromagnetic field according to electromagnetic laws.

In one bold leap, he had united not simply electricity and magnetism, but also light, heat, and “other radiations if any”. The many colors of visible light just part of a wider spectrum of electromagnetic waves. Flickr/final gather, CC BY-ND

It took another two decades for the birth of radio as we know it – but Hertz’s radio waves confirmed the existence of Maxwell’s “other radiations if any”. These radiations – including ultraviolet, microwave and radio – have different wavelengths from those of visible light and infrared which are the only electromagnetic radiations we see or feel directly.

Just part of the range and use of electromagnetic waves (in metres). Designua

Today, electromagnetism underpins our way of life and has allowed us to develop many of the powered devices we take for granted. It’s allowed us to light the darkness and to communicate over distance through telephone (mobile and fixed line), via radio and television.

It’s allowed us to “see” within our bodies through x-rays and magnetic resonance imaging, and to observe the universe through telescopes, not just in visible light but at other wavelengths too including radio. Wi-Fi itself is an Australian invention arising from research in radio astronomy.

Our understanding of the electromagnetic nature of light and all these radiations was deepened in 1905, when Albert Einstein revealed light has a quantum as well as a wave aspect. All these insights have led to the development of such important technologies that the UN has designated 2015 as the International Year of Light and Light-based Technologies.

But 150 years ago Maxwell’s theory was utterly revolutionary in both style and content. Einstein was an early champion of the theory, which helped inspire his relativity theory, and today, the idea of gravitational fields and electromagnetic fields is fundamental in physics.

No wonder Einstein said: “One scientific era ended and another began with James Clerk Maxwell.”

Robyn Arianrhod, Adjunct Research Fellow, School of Mathematical Sciences at Monash University, does not work for, consult to, own shares in or receive funding from any company or organization that would benefit from this article, and has no relevant affiliations.This article was originally published on The Conversation. Read the original article.